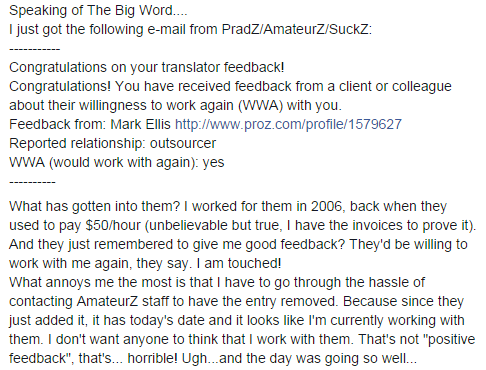 I saw the note above from a translation colleague who was obviously distressed to receive "positive feedback" from an infamous bottomfeeding agency best known for its periodic intimidation letters pleading poverty and demanding rate cuts for translators. In years with record profits for the company and fat bonuses for its CEO, of course.

Although Jesus of Nazareth ultimately found success with a business model that involved hanging out with shady characters, associating with historically abusive companies like this one, riddled with incompetence, is unlikely to do much positive for one's translating career, not to mention the state of supply in one's refrigerator. If the wrong people praise you, chances are you're doing something wrong. With thepigturd, sometimes known in court as thebigword, the spiral has been ever downward in any real sense for years.

The discussion in social media continued, and other colleagues revealed that they too had received unsolicited "praise" in the form of ProZ WWA ratings, often mere minutes after making a public comment about thepigturd, even though they had not done business with that bunch for many years. One comment I received indicated that thepigturd had left positive feedback for someone with whom there had never been a business relationship:

Is this some sleazy way to groom new victims? Professionals prefer not to be molested by companies like thepigturd. Some speculated that this was the company's way of letting translators know that they are under its watchful eye.

Unfortunately, many professional associations, whom one would expect to enforce codes of ethics and defend the interests of professional members providing translation and interpreting services, too often include such disreputable companies as "corporate members", very often with a corrupting influence on the organization as a whole. The ITI in the UK currently has thepigturd as one of its members, and pressure from corporate members in the ATA years ago led to the clause discouraging the requirement of free work to be stricken. (IID was it? I used to cite it all the time, but that was long ago.) Some associations of translators and interpreters, like the German BDÜ and the International Association of Professional Translators and Interpreters (IAPTI) do the right thing by recognizing that although they are proper partners in business, the interests of individual service providers and translation companies are best served by separate organizations. Qualified individuals who own or manage an agency can join the BDÜ or ITI, but corporate "personhood" is not considered an eligible basis for membership.

The generalization is largely correct that large translation companies such as Lionbridge, TransPerfect, Capita (the owners of the court interpreting disaster in the UK) and thepigturd are best avoided by translators and interpreters at all levels, as well as by corporate translation buyers concerned about translation quality for their brands. Where the functions of an agency are required, I have yet to see a case where the client would not be better served by a "boutique" translation agency, small companies who are usually specialists in a limited number of fields and who avoid ridiculous claims like "if we don't specialize in it, it doesn't exist!" These smaller, more responsible and focused companies also tend to have project managers with far more experience than the sort of recent graduated cannon fodder that is marched to the front at SDL, thepigturd et alia and falls quickly, in a few years at most, in the battle of bottom-feeding LSPs.

And a great number of successful, experienced translators enjoy excellent relations with boutique agencies as their business partners. I have myself for nearly 15 years now.

In response to complaints about the unsolicited "positive" feedback from thepigturd, staff at ProZ.com quickly removed the potentially damaging content from user profiles. Good for them. But perhaps ProZ management should consider means to prevent such feedback in the first place by free account users like "Mark Ellis" fronting for bottomfeeders.

Posted by Kevin Lossner at 8:28 AM