At end of June this year I'll be doing an expanded, in-person reboot of my occasional terminology workshop with new material and workflows for those who want to do more to control quality and improve communicative vocabularies in interpreting, translation and review projects.

Space is limited at the All-Round Translator event, but I hope you can join us to learn about

The content is applicable to work with many translation environments, but some segments will share particular tips for maximum productivity using the unbeatably practical memoQ environments.

Posted by Kevin Lossner at 2:36 PM No comments: 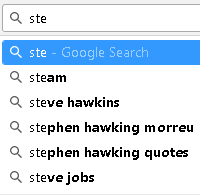 It's often quite interesting to see what Google offers to auto-complete what one types. Today, on the birthday of Albert Einstein, another great physicist, Steven Hawking is in the news again, the man born on the day Galileo died having taken this day to shed his mortal form.

Professor Hawking has been on my mind quite a bit in recent years, though his disciplines are quite different from any I have practiced. But as life has happened to the son of a colleague, and the debate on quality of life and euthanasia has evolved, my thoughts have returned time and again to the man who was supposed to die more than half a century ago but who instead lived a full life and made enormous contributions to science and human understanding of the Universe. A man who, by some modern practice, would have been aborted in the womb after DNA testing or who might have been put down like a stray dog if some Dutch or Belgian doctor decided his life was an undue cost burden on the State.

Arrogant fools make such a calculation, and their House of Evil too often has its foundation on such "good" intentions. And humanity is poorer for that, immeasurably so.

Education, vocational training and professional practice without well-considered ethical foundations, subject to frequent, careful integrity checks rest on uncertain ground that can too easily turn to deep mud or quicksand and swallow all that keeps us apart from the most degraded of beasts. If you want examples of the grand architecture of the human spirit, look not to the Coliseum, the great aqueducts or the pyramids. Look to the tubercular Keats. To Helen Keller. To Freddie Mercury. To Mr. Hawking. Time held them green and dying, but their songs carry on as the sound of the sea.
Posted by Kevin Lossner at 1:54 PM No comments:

The worlds of artificial intelligence and machine pseudo-translation are largely ones of delusion, wishful thinking, deceit and professional manipulation, but once in a while one encounters a few people in these fields who are worth the time to listen and discuss. Dion "Donny the Wig" Wiggins of Omniscien, formerly Asia Online, is one of these: a researcher at heart, it seems to me, and someone with a good appreciation of processes, even those having little to do with the technology he represents in his day job. Although an established godfather of the MT Mafia, his approaches to application have a large dose of common sense largely absent from the ignorant masses who place their faith in technologies they do not actually understand in detail. More than once he has shared workflow "revelations" that back up old research and testing of mine, but with more and better data to show how great productivity gains can be achieved by simple reorganization of common tasks. So when he told me about his company's upcoming symposium, I knew that it probably wouldn't be the usual bullshit-tinted fluff drifting through the professional atmosphere of translation these days. 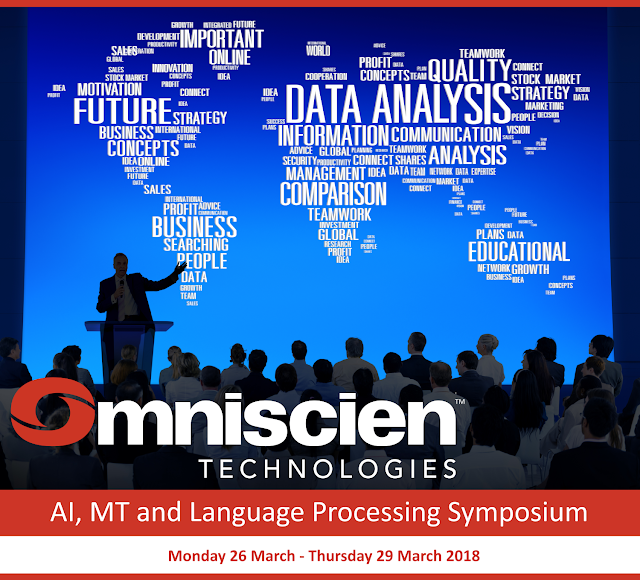 Click the graphic above to see the symposium program - attendance is free. You'll see some familiar names and perhaps conclude that there might in fact be a bit of BS in the air, but there is likely to be a good bit of substance to consider and to apply even in areas not covered by the program.

One of the biggest problems I have with machine pseudo-translation technologies is the utter ignorance and dishonesty of many of its promoters and the massive social engineering which takes place to persuade and intimidate people to become its willing victims in areas where it offers little or no real value. The continued disregard for documented occupational health issues and language skills distortion in post-editing processes, and the vile corruption of academic programs to produce a new generation of linguistic dullards who cannot distinguish algorithmic spew from real human language are all matters of significant concern. But if we are to engage the Forces of Evil and know our Enemies and keep them within their wholly legitimate domain, this event might be a place to start :-) See you there.
Posted by Kevin Lossner at 12:12 AM 3 comments: