Translators Without Borders: some projects

As can be seen from some of the responses to the first blog post in this series, the response of some to a "need" is too often rooted in emotions which override logic and rational consideration. Something must be done! is a common refrain, and when questions are raised as to whether the actions taken are in fact correct and proper and serve their presumed objectives, the questioner may be surprised by the unhinged vitriol of some responses.

Nonetheless it is important in any relief efforts to consider not only how well the path to the goal is paved with good intentions but whether in fact the path gets to where it should. There is a long and unfortunate history, for example, of food aid to many parts of the world not only wasting resources in the logistics involved, but doing actual harm in the communities where there is an intent to serve. This is also a matter to be considered in "translation aid", particularly in cases where there is no immediate humanitarian disaster on the scope of a tsunami or hurricane where the overriding principle is clearly to move fast and furiously before the death toll rises quickly higher through inaction.

In the presentation in Athens about Translators Without Borders and other language service charities such as the Rosetta Foundation, insights were offered into a number of past and current projects and what clearly worked well and what was perhaps less successful or sensible. This is the sort of review which should take place anytime one considers how to get the most out of the time and resources available. 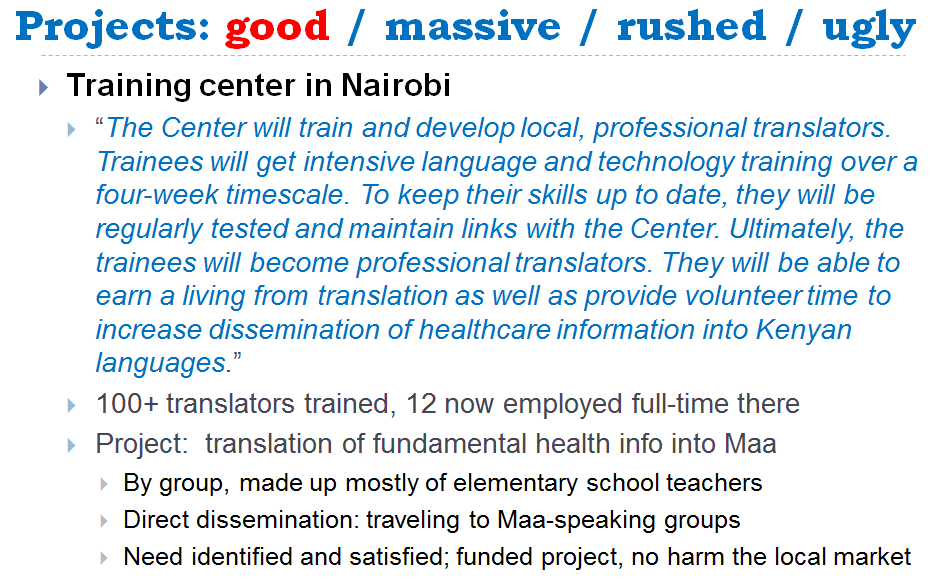 An example of a clear, best practice success was presented with the translation training center established in Nairobi, Kenya. Here, the objective was to establish local resources not only for volunteer work but to serve the ongoing commercial needs for translation in the local communities. The training was launched with one of the finest translation technology experts I have the privilege to know, (English to) Polish colleague Marek Pawelec using state of the art translation environment tools; the result has been a great number of people trained in modern approaches to translation and full time employment for a significant number of them. Unlike the sometimes questionable efforts for food aid in some parts of the African continent, I don't think there can be any rational objections to what was done here; on the contrary, it is a model to be repeated (without discounts).

An example of a project less well considered in some instances might be the Wikiproject Medicine, which was not actually (AFAIK) launched by Translators Without Borders but which is significantly supported by the organization. 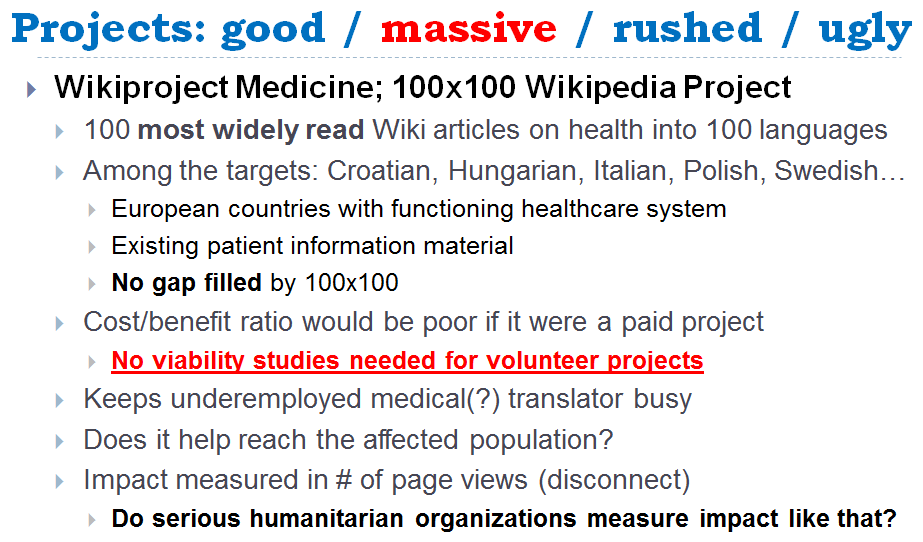 My impression of this project is that it is unnecessarily obsessed with the silly symmetry of articles and languages in a matrix without really considering where the most critical needs may be. It wasn't clear in the presentation whether TWB was involved in recruitment and execution for the full matrix here, but I think it is safe to assume that the real impact in Sweden, with its reasonably functioning health care system, will probably not be worth the effort. The situation may of course be quite different in some other language like Pashto.

The Automated Community Content Editing Portal (ACCEPT) was given as an example on the far end of the spectrum. 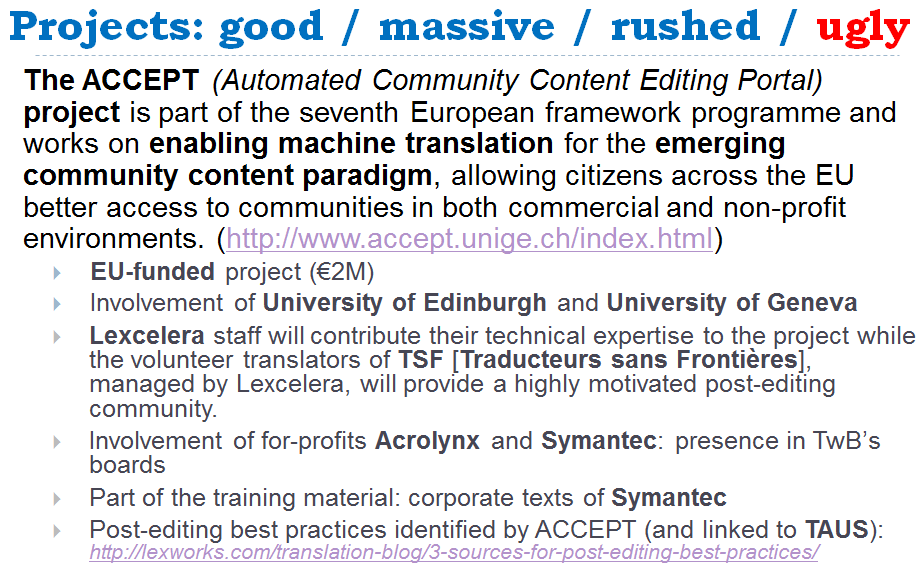 Once again, this was a project not launched by TWB (or in this case, the sister organization, TSF) but where resources were provided. And here there was a clear, and to my mind ethically questionable, use of corporate materials in the training phase, with the translated texts benefiting a corporation represented on the TWB board. This is smoke - is there a fire?

In a world with so many needs, it's a rare organization that will get it right every time. But some limits should be clear enough to those with good ethical standards and common sense. And for those inevitable gray areas, well-considered codes of ethics and other guidelines can be helpful. These should be subject to honest, critical review on an ongoing basis so that the worthy objective of helping those truly in need can be met effectively.

The first part of this series, which raises questions of possible conflicts of interest, is here.

The third post in the series, with details of the ACCEPT project, is here.

Posted by Kevin Lossner at 2:15 AM