Posted by Kevin Lossner at 12:39 PM No comments:

The high cost of linguistic incompetence

Time and gain we hear the warnings. Sometimes we utter them ourselves in a desperate attempt to squeeze a bit more margin out of a difficult project we hope to undertake. But is it really true that top quality translation is critical in today's fast-paced, globalized world? Or is understandable 'good enough' as the MT crowd and many a high volume, low quality zookeeper LSP would have us believe? Are we looking out for a client's interests by charging more to cover the cost of careful work and checking by another skilled linguist, or are we just greedy, hungry, whining perfectionists out of touch with real business needs?

My Munich correspondent, English and Italian to German translator and business IT specialist Aniello Scognamiglio once again brought some interesting research to my attention. BBC News recently published an article detailing the work of Charles Duncombe, an online entrepreneur in the UK, who found that a single spelling mistake on a web site can cut sales in half. It makes one wonder about the possible impact of correct, but ineptly expressed language, or even language which flows well in one culture, such as the UK or India but not in another, such as Canada or the US. Half! That's a lot of money potentially.

If I were into online selling, right now I would be creating various microsites and test pages to see for myself how sales would be affected. But I don't really need to do that. It's been done, and the results have been discussed a number of times by people like Pat Flynn (who publishes the Smart Passive Income blog). These other amateur studies have involved not only language but also elements of design, but the relationship to Mr. Duncombe's research does not require an advanced degree in psychology or marketing to understand. Think of your own experience.

I was checking the website of an esteemed colleague two nights ago as I wanted to refer someone requiring an expert in physics who translates from German to English. I know this person's project management work reasonably well, and I trust her quality. Yet I swallowed hard when I noted the word "Germn" on a page discussing her high quality language services. How would a stranger react? Closer to home, a fellow translator who contacted me privately with some questions about technology for audit-compliant archiving (something I dealt with in my time as a consultant and application developer at EASY Software AG) kindly pointed out some stupid mistakes I had made in a text I translated quickly into German myself and posted on a site which I use as a repository for my online terms and conditions. While this may be of some help in my present situation where I continue to ward off business to allow myself to recover some "life" after considerable changes in my private situation this past year, this sort of thing is not healthy for a business long-term.

When I see information such as that from Messrs. Duncombe or Flynn, I cannot help but realize that the 200 dollars saved by paying someone 10 cents per word to translate a 1000 word web site rather than the exorbitant rate of 30 cents a word to get a translator with copywriting skills and a good quality assurance process is lost again many times over when customers remain unengaged by the language of the site or are put off by its errors.

If you are one of those translators who can't spell or who frequently makes mistakes or slings language like sludge after midnight, think about what you are costing the client. We all want top rates, but we must deliver and demonstrate the value to earn them. Do I do this? I could weasel the answer here by making comparisons, and I think my customers would generally answer "yes", but I know when I see a marketing text weeks later that I could have massaged it just a bit more and added some brilliant twist that might help sell yet another machine at € 500,000 a pop. Or when a fuzzy match pops up from my TM and I see a typo that I read over and missed. There's usually room for improvement with anyone and any organization, and smart customers in the right niches are aware of this and its potential payoff. And they are willing to pay for the value they will receive, the value that we should deliver to earn more than a bag of peanuts.
Posted by Kevin Lossner at 9:03 AM 8 comments:

Many thanks to English and Italian to German translator Aniello Scognamiglio for sharing with me a link to the most interesting online dictionary project I've seen in a while: the "Global Glossary". The brainchild of Young, Single, Multilingual blogger Michal Boleslav Měchura, a language technologist based in Dublin, Ireland, it has a unique and useful interface. In a post last week, Michal described his 95-language project and his plans for it. Having grown rather sick of the trashy, buggy interfaces of other online glossaries, I find his work a refreshing change of pace, and my initial tests of it suggest that it will have some value to me as a reference. Have a look! 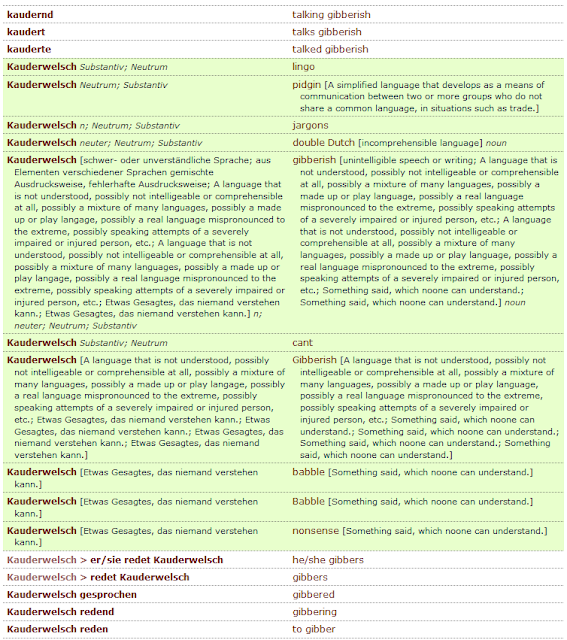