The Polish legal translator Łukasz Gos-Furmankiewicz has written an interesting and thoughtful piece on the use of language and its effect in business transaction paradigms. Although it should be self-evident that it is not in one's interest to accept misleading euphemisms like "best rates" in a serious business conversation, many do (though I tend to turn that one around myself and quote double my top rate, figuring that this wiull be about as good as it can get). Łukasz offers some useful suggestions on how one might change the tone and content of such discussions and achieve better, or at least clearer results.
Posted by Kevin Lossner at 10:22 AM No comments: 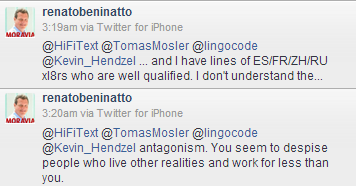 Yes, there is a premium market of which many of the linguistic sausage pundits in the MpT world are often largely unaware, though, as colleague Kevin Hendzel has pointed out for years, it comprises many billions of dollars, euros, zlotys, etc. of business ripe for the taking by those who can meet the market criteria. All the disputes and denials on that subject are either deliberate deceptions on the part of corporate-side exploiters or simple lack of insight or of information by others. But in parallel there is that other universe of "commodity" language service which some are best suited to serve. There is no shame in that, because these words are often needed just as much or more than those in the world of high-end language service, and the waters are indeed rising swiftly with globalization there for all The Big Wave itself might have failed. But those hoping to profit from what the profiteers often refer to as the tsunami of information would do well to remember the example of Henry Ford if they want to escape being left broken on the beach one day when the tide recedes. Fairness pays and bread cast upon the waters is indeed found again, multiplied.
Posted by Kevin Lossner at 10:52 AM 7 comments: