Seven days of gratitude, day one: the teachers

Marianne had a birthday yesterday, and I neglected to write. So I suppose this post is my own version of the late electronic birthday card. Real ones are for dinosaurs. Like us.

I started her German class for the best of reasons some 39 years ago: revenge.

My fourth grade teacher, Mrs. Swansong as we called her, had many peculiar habits, among them the pulling of ears. And at that time I was blessed with a short haircut and very prominent ears, which stood out invitingly from the sides of my head, tempting to be pulled like taffy. And she was proud of her two children, so much so that her boasting of them remains more prominent in my mind 44 years later than anything I was supposed to have learned. I'll never forget her telling the class one day how her genius daughter had managed to achieve a "B" grade in German, notoriously the most difficult class at Monrovia High School. So I resolved then to take German and get an A. That would show the bitch.

Five years later my chance came. And my first test results on a German vocabulary quiz. C+. David was delighted. A casual friend at junior high school, he had a burning interest in science and engineering and voraciously read his older brother's texbooks in mechanical engineering from his courses at Cal Poly Pomona (or "Cow Party" as we called it then). He announced to me that my academic reign of terror was over and that I had joined the ranks of the common fowl in the chickenyard and had to scratch now for my achievement like everyone else. I noticed his A+ grade on the quiz and acknowledged that he was now, in fact, the rooster on the top branch over the henyard and I got down to the business of scratching and sniffing my way to success.

Success wasn't to be found in the schoolbooks but rather with a group of older friends who took me as something of a mascot I suppose. I had joined this elite group of germanophiles more or less by accident. I barged in one day to my ninth grade English teacher's class and began my tirade with "Mrs. Rowe" (rhymes with "cow") "the first point I would like to make.... And secondly.... Moreover.... And in conclusion... !!!" as an older girl stood quietly aside, listening to the rant. Afterward, she took me aside and suggested my energies might be better used on the debate team, so I took her advice and joined it. Where I met other friends, including her somewhat gay boyfriend at the time, who inspired my love of blowing things up and making poison trench gas and other suitable higfh school chemistry pursuits. The lot of them took German, a motley crew of overachievers in the advanced course, and I was permitted to tag along on late-night coffee house chats as long as I stuck to the rule: speak German. So by halfway through the year of my freshman German course the reign of terror resumed, I went on homework strike (what was there to learn?), disrupted class by quietly reading novels and Marianne somehow dealt with all of that along with occasional exploding bits of nitrogen triiodide spread on her classroom floor, which brought back ugly memories of her childhood in the Berlin bomb shelters as the Allies filled the skies and flattened the city above her.

Remembered rituals from her childhood were an important part of German class and the many social activities of the Deutschverein, and I first heard of the school of languages in Monterey, where many interpreters had been trained for the recent conflict in Vietnam and where the best language instruction in the country was said to be found. I never applied, because anything with military associations was anathema in a popular culture with too many fresh memories of the pointless southeast Asian slaughters. But Mad Marianne was the best face of language and German culture in those days and inspired many with her own crazy mix of grammar, vocabulary and Cat Stevens.

A lifetime later, my research career and my marriage to a German friend behind me, I had taken to translation as a means of disencumbering my life of things that kept me apart from my dog and my daughter, who were my great consolations as an exile in a country somewhat different from the kitsch Gemütlichkeit of high school imagination or the wild exuberance of an academic year abroad in a paradise of archaeological and linguistic rigor with mentors like the bombastic Gelehrter Rolf Hachmann or the shy but brilliant Max Mangold. All of this was possible for me mostly likely only because my high school German teacher, Marianne Campbell, understood that sometimes the best way to teach students is to allow them to find their own path to learning and set aside the structures so effective in most cases, giving the unknown seed its space to grow. 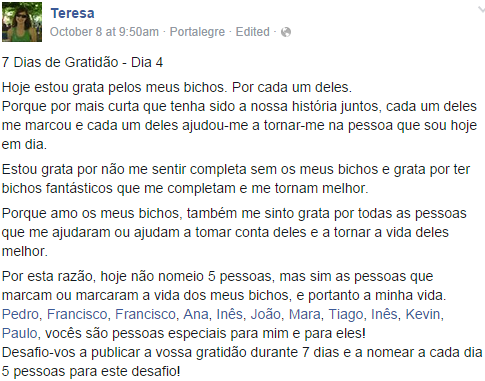 As Marianne and others who survived me in their classrooms knew, I've never been one for following a format, and even when I do it inevitably takes a shape somewhat different from the original intent. There is at times entirely too much pessimism among my translating colleagues, particularly among the Germans it seems, whose social media streams are a toxic river of angst and complaint. But those looking at the bright side of translation often fail to notice the cross to which some professionals have been nailed, not always by choice, nor to appreciate that the darker sides of a matter can illuminate in ways which may prove more instructive. I'm grateful for all of it, for everything, for everyone, though the gratitude is often submerged at the unconscious level.

I am grateful for family and friends, of course; for my animals as well. For the pain in my hands that brings tears as I type - it reminds me that I can - and for the dictation software and the various pharmaceuticals that offer sometimes needed alternatives for professional productivity with less physical distress. For the shelter from the rain when it has soaked me through and chilled me on a day the butane tank is empty and there is no hot water on tap to warm me but blankets and dogs to serve in stead.

But today? I am grateful for the teachers, who take many forms and roles in my life and who sometimes would not know themselves by that name.

Posted by Kevin Lossner at 5:39 AM

Email ThisBlogThis!Share to TwitterShare to FacebookShare to Pinterest
Labels: gratidão