The Kindness of Strangers and Friends

This day was one of tired celebration. I'm in Lisbon, exhausted and relieved at getting my Portuguese visa renewed after months of over-the-top stress about the difficulties of scheduling a renewal interview in a system badly cracked under strains from international politics of recent years. I used to walk in to an office of Serviço de Estrangeiros e Fronteiras (SEF) and there would be almost nobody there, and business was settled quickly. Now, even when I tried to book an appointment (walking in is no longer allowed) six weeks in advance, I was given a date for a renewal interview that was three and a half months after my visa would expire. Only by great good luck did I get an earlier date when somebody canceled and my lady called the immigration offices at just the right moment. 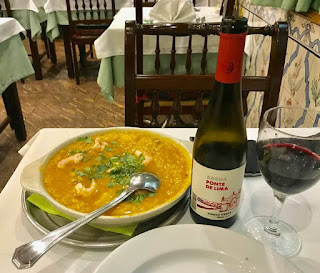 I went out to a local restaurant near our Benfica apartment to celebrate alone; the dinner of monkfish and shrimp rice was perfect with a vinho verde tinto.

As I ate, I read various articles on my ever-present iPhone; one - "Helping Others Become Bilingual" in Psychology Today - spoke in particular to my present experience of life and things that have moved me so often in the past six years as I learned a new language and sometimes struggled more than a little to find my way in a new culture I may never understand entirely. The article is basically about kindness.

Kindness is what brought me to Portugal. It is, of course, not a patented property of the country and culture, though I have encountered more of it here than anywhere else, and I believe that there are some cultural factors which cultivate it more than in some other places. The kindness I have experienced in nearly every country, sometimes momentary, sometimes sustained over decades, is the mortar which holds together the foundation of most of what has been good in my life, and some significant part of that has been linguistic kindness in a large part. When I was an exchange student in the Saarland many years ago, I was welcomed into homes of people who spoke a dialect I found baffling, and they kindly tolerated my lack of understanding, never ostracized nor criticized me and patiently translated bits like "Hoscht gess?" into more familiar forms like "Hast du gegessen?". As a consequence, the many dialects of the Saarland and Rhine-Palatinate region of Germany will always have a special place in my heart.

Poland taught me that the language of kindness need not be verbal. I was buying bread one morning while attending a professional conference, and I had tied my young wire-haired vizsla Jambor to a metal chair outside the bakery. The air brakes of a bus frightened him, and he took off running across a busy street. I screamed No!!! and ran after him into the street, falling full length in front of a car which stopped just in time not to kill me. I ran after my dog and he raced down the sidewalk opposite; after several hundred meters some pedestrians managed to stop him before he ran out into a busy intersection, where he might very well have been killed. I held my young dog, shaking and crying, wondering how it was that we were still alive. The voices around me were comforting, but I understood nothing; I just shook until an old man quietly put his arm over my shoulder, and I could breathe again. I returned to the bakery with the bent and broken chair, expecting to be screamed at for the destruction, but the owner of the shop invited me and my dogs (Ajax, my Drahthaar, was also with me and also managed not to get killed as he followed me on the run) inside and gave me tea, telling me not to worry.

The Dutch are known for being brusque and rude, but in that crudest of cultures I have experienced kindnesses I can never describe without tears and memories of clients who have become friends who will never be forgotten wherever they go.

Such stories are everywhere, and I suspect nearly everyone, anywhere, has at least a few. Bilinguals surely have some, more like a lot, of kindnesses shown when they stumbled and fell over new or rusty tongues. Today again I had my share, in the SEF interview where I proudly mangled the Portuguese language with a patient immigration clerk, at dinner tonight as the waiter kindly confirmed my dessert order while teaching me the correct way to pronounce the fruit I wanted and many times in between.

My six years have, I think, given me some insight into what it might be like for some of the many refugees and immigrants in this world as they struggle to come to terms with new languages and cultures, often without the financial and other material resources I have and with backgrounds and skin colors that might inspire less sympathy than mine usually do. When I think life in my wonderful country of choice can be hard at times I feel shame when I remember how much harder some things are for so many others.

I spent time living in a very poor neighborhood of Évora, because I wanted to get away from all the educated Portuguese who would immediately switch to English with me. The Psychology Today article brought back many memories of that time and the extraordinary kindness of the people who, upon being told that I was not returning to the country of my birth, but instead intended to make theirs my home, welcomed me and patiently taught me new words and lavished me with kindnesses of every degree on my many walk with the dogs through their streets. The local grocery workers even took extra time to show me local foods and teach me to pronounce all the things I pointed to buy.

I am not always kind in return, not even with those who are kindest to me, and that is simply wrong. My beautiful doutora spoke the most miserable English when we met, and I was grateful for her patient communication and complete acceptance of my complex and usually difficult self, but now that she has achieved an English fluency that would make her a good international lecturer I unkindly nitpick her word choices and burst with impatience and yet another fucked-up participle that anyone would understand anyway with no trouble. And I fail to give credit most of the time when I steal her original perversions of English and pass them off as my own linguistic creativity with the applause of my professional peers. Yes, I am a plagiarist of sorts, probably, and an ingrate in any case.

Of course, I have professional justifications for being a linguistic asshole; I feel - probably rightly so - that my strict separation of languages I use is necessary to keep my edge as a writer and translator and not fall into the incompetent muck that is the medium of the bulk market translation service bog. I cringe when I see the actual incompetence of some language professionals who are not quite Dunning-Kruger cases but are at least not in the fraction of the top percent that so many of my friends inhabit. But I'm getting that all wrong in most respects. As some others do too.

Michael Moore made the point well in his autobiography when he wrote of his time with writer Kurt Vonnegut in that great man's last year. Kurt said that his son Mark had figured out the meaning of life for him, with all its senselessness and pain. "We're here to help each other get through this thing, whatever it is." That's about right.

I'll be presenting a free webinar on the uses, advantages, and quirks of memoQ's often underestimated and misunderstood LiveDocs module: everything you always needed to know about its features and corpora but never thought to ask.

When? On 23 April 2019 at 3:00 PM Lisbon time (4:00 PM Central European Time, 7:00 AM Pacific Standard Time); webinar attendance is free, but advance registration is required. The URL to register is:

After registering, you will receive a confirmation e-mail containing information about joining the presentation.

Particular questions regarding the subject matter or challenges you face with it are welcome in advance via e-mail, LinkedIn or other social media contact. I'll try to incorporate these in the presentation.