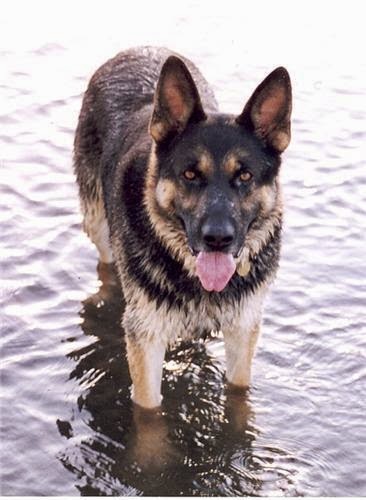 As a child, I hated and feared German Shepherds. They were the pit bulls of the 1960s, trained by the rather harsh methods of the times and very often abused by idiots like Mr. Rolf, the white trash next door who engaged in a number of questionable exercises to make his dog fierce. He certainly made it good at biting neighborhood kids in the ass.

So for quite a number of years, the only good GSD was a dead one as far as I was concerned. I carried pepper spray with me on my paper route and used it to fend off many an attack, and later I learned to deter the attack of an aggressive German Shepherd by charging it directly while growling and barking myself and striking it on the nose with an umbrella or convenient stick.

When my wife suggested a German Shepherd for the old farm in Oregon, I was horrified. "I seen them dogs b'fore," said an old man at a sheepdog training class a few years later. "Theyze stock killers." I wasn't so much worried about the killing of livestock as I was about the killing of myself or the kids by some evil beast only barely distanced from its wolf ancestors. So when Colin vom Distelfeld came into my life I waited for an inevitable doom that never came. He was the first dog with which I was engaged in training of a serious kind; my first lessons in training dogs came from a sort of family tradition learned with the Wehrmacht.

The methods I learned were generally brutal, even when they were not intended to be. The technique of discipline in which I was taught to take the puppy by the scruff of the neck was said to be how the bitch disciplines her pups, but it is instead rather more like the way my hunting dog Ajax kills a raccoon, cat or small dog which tries to bite a piece out of him. The puppy Colin must have been terrified. He spent many a night alone and crying on the end of a line outside by his doghouse in the everlit courtyard. A bit like a concentration camp, with the flag of Lower Saxony flying over the farm and training and discipline vocabulary which I innocently absorbed and learned later bore an uncomfortable similarity to forms of addressed used with prisoners in a KZ.

By the time Colin passed away in another land 13 years later, I had learned that kinder methods were far more effective for teaching dogs as they are for human, but the obvious truth that consistency and love are better motivators than screaming and beating is not always so obvious when the early fears in a relationship are not well resolved. Colin never became the killer I feared he would be, because despite abusive training methods, the family environment in which he spent his first years was one of general affection and play, and offered a diversity of experience with many kinds of animals and people. Like many people who grow up with diversity and tolerance of it, the dog grew to love creatures of every kind, and treated all of them, from baby mice and young chickens, to lambs, geese, cats and equines with gentle and playful friendship. This dog taught me the value of forgiveness and second chances and that even the wrong methods with the right intentions can succeed.

The dogs I have had since him have been trained increasingly by positive means, and the differences in behavior and responses which I have observed in that transition of method have amazed me and times and humbled me more often. They have made it clear to me how much people share with their fellow mammals psychologically and how much more we can achieve with each other through kindness, rather than brutality. 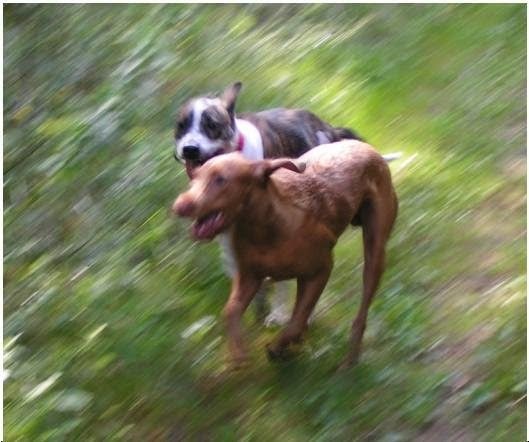 In the course of the last century, animal behaviorists have helped us to understand the value of positive reinforcement as a motivator as well as the risks of harsh "discipline", which is better called abuse. And old habits are not always easy to break in the same way that those raised in violence often struggle to break the violent cycles in their lives. I have watched with no little satisfaction as police department K-9 units and military trainers have abandoned old, hard methods and picked up clickers and bags of treats as they recognize the validity of the science which has proven that a dog trained with love means greater reliability and safety in the field. Even some German hunters have realized that the best performance in the hunt comes from dogs treated with love at home and in their training. Paul Schrader, a leading dog trainer in Germany with many top results in championship trials going back to the days of the GDR once observed to me that the best dogs he had seen in some 50 years of work with them were inevitably those raised as part of a family, not confined to a kennel. Klar. 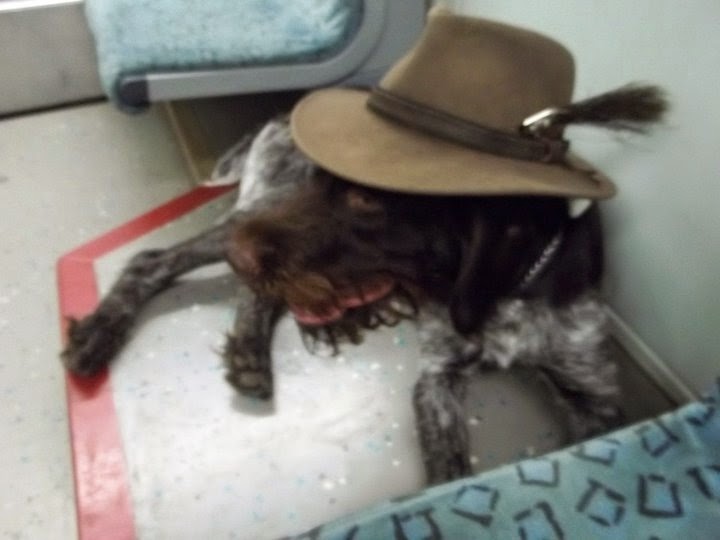 When I expressed my gratitude for teachers on the first day of this series of articles in response to a challenge by a young Portuguese veterinarian, who is herself quite an inspiring example of positive training methods and behaviorist practice, I should have included dogs, because as I have "trained" them, they have taught me, reminding me time and again of the value of kindness, loyalty and quiet companionship. Communication with dogs is sometimes the most complex form of translation or interpreting I do, but its successes have given me valuable insight into many diverse failures of communication.

Hunters have a particular method they like to teach dogs who retrieve, the Zwangsapport or forced fetch. That people continue to practice this particular bit of idiotic brutality is somewhat amazing; positive alternatives are demonstrably better and their superior results are quickly apparent in the field.

When I began training my dog Ajax vom Bernsteinsee to fetch under the direction of my hunting mentor, his breeder, I was taught that I must pull his ears and strangle him so that he would eventually learn how wonderful it is not to experience pain by obeying my commands. German society often runs a bit like that as one can see from the rather negative tone still found too often in its schools. These focus more on elimination, weeding out the weak, rather than encouraging all to make their best contribution. In the old German dog world I was told that perhaps six of the ten German Shepherd puppies born to my bitch in Oregon would have had to be killed so that the strongest four could thrive. Though killing puppies is now frowned upon in the Vaterland, there is still too little concern about the waste of potential domestically or in relationships with the country's EU partners. While the German government chastises the weaker countries in the union and calls for tribute to its banks and emphasizes the virtues of austerity and beggaring your neighbors, my German dog teaches me the real virtues of loving acceptance, patience and the occasional tasty chicken in my jaws.

In my expressions of gratitude thus far, teachers, story tellers, a frying pan and dogs abide, these four: but the greatest of these is dogs.

Posted by Kevin Lossner at 1:56 AM

Email ThisBlogThis!Share to TwitterShare to FacebookShare to Pinterest
Labels: dogs in translation, gratidão