For many translation tasks in some translation environments such as memoQ or SDL Trados Studio, the document preview functions are enormously helpful to understand the context of the text to be translated, and the integration of the preview in the working windows of the CAT tool saves time over staring at printouts or scrolling through PDF files in many cases. The ability to use a preview to jump to a particular point in the translation grid is also a fine thing.

But too often the document preview in memoQ looks like the screenshot above - i.e. no preview visible, even when the file import dialog indicated no trouble creating one. I have cursed a lot about this for a long time, reimported files in the hopes of seeing a preview, sometimes opened and closed the file in memoQ to get the preview to show. It's pretty much of a crapshoot sometimes, and too often I throw "snake eyes". The problem seems to be worse on a slow laptop I sometimes use, which has far less RAM than my usual fast working machine.

Quite by accident recently, I noticed that one can often "recover" a missing memoQ preview by toggling between the HTML preview and one of the other two options which appears when the cursor passes over the upper right portion of the view pane. While I hope that Kilgray's developers can sort out these problems in a better way, in the meantime this procedure might reduce the irritation of some who work with this generally good tool.
Posted by Kevin Lossner at 8:37 PM 1 comment:

Better ways to search the Internet while translating

When Kilgray introduced memoQ Web Search a few years ago, I was unimpressed, because I was fairly efficient at working with the several tabs of my favorite sites to search for information during translation projects and I couldn't imagine much value to be had from an "integrated" search in a stripped-down custom browser. And the buggy example templates shipped with the memoQ release (several search setups are incorrect) didn't help much. It was only when I began to take a careful, systematic look at this feature to document it for my memoQuickies guide to configuration that I realized how straightforward it really was, and since then, despite ongoing bugs in the feature which sometimes lead to crashes, it has become one of the most important practical features of the product for me. Being able to select a text in the source or target and hit a hot key to search multiple sites at once really does save me time. Lots of it.

There has, of course, been another product around which does that too, which works in more or less any Windows environment and which is far more configurable. But when I took my first look at IntelliWebSearch (IWS) years ago, I was put off and confused by the nerdishness of the presentation, and I just wasn't ready to be told how many damned options I had when I was trying to get my head around the simplest basics. Recently, however, I have beome increasingly irritated at little things with memoQ Web Search, including the impossibility of adding my user credentials to turn off ads on some sites I use, and I began to wonder if IWS might not be worth another look. And indeed it is.

So why not try this with web searches? Searching too many tabs at once tends to be slow, which is why I generally recommend no more than a few favorites be used with the integrated memoQ feature. IWS, unlike my usual tool, offers the possibility of configuring multiple "search groups", all of which can be accessed from anywhere with a hot key combination you assign. So I tried this for a few special sites that I usually don't want in my memoQ Web Search but which are a nuisance to deal with manually when I need them. It took me just a few minutes to install IWS, and with the help of a couple of short tutorial videos on the tool's web site, I had my custom searches set up(the configuration wizard to do this is dead easy and user friendly), and in about 10 minutes I was happily invoking special web searches on multiple tabs of my default browser (where I have configured some sites to shut off the damned ads) while I worked in the memoQ translation and editing grid.

So IntelliWebSearch today isn't nearly as difficult to figure out as it seemed years ago. Whether the product has improved or my head is just a little less cluttered now I'm not sure. But it's a very useful tool and a good extension of my working environment which I can recommend with more confidence. I can do useful things without drowning in the depth of its product features.

Nonetheless, I wouldn't mind a guided tour from someone with more of a clue than I have. And later this summer I have exactly such an opportunity. Colleague Michael Farrell, the Italian to English translator who created IntelliWebSearch for all of us, is giving two webinars sponsored by IAPTI, which offer a thorough grounding in the basics of this productivity booster. Information with links (click the images!) is below. I'll be there and hope you'll join me and learn useful things to help in your research of monolingual and multiplingual information sources on the Internet. 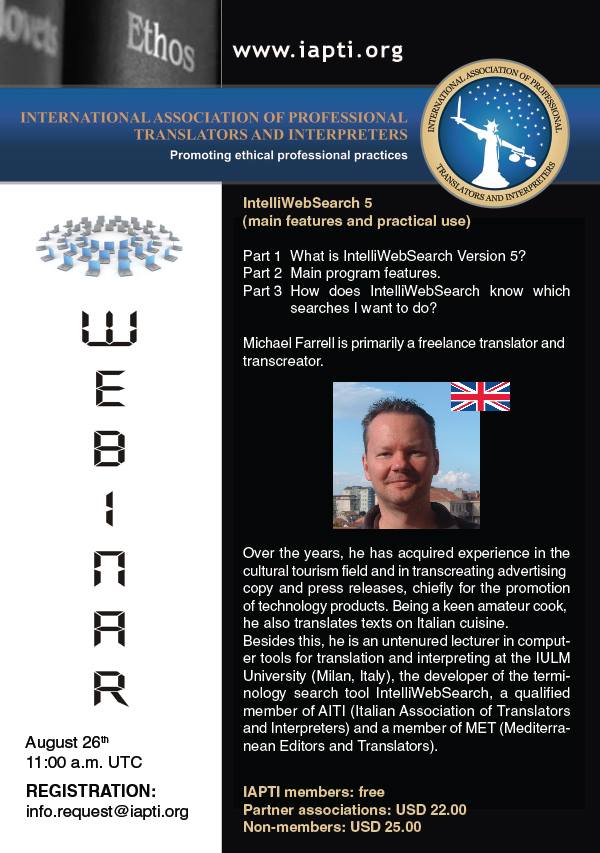 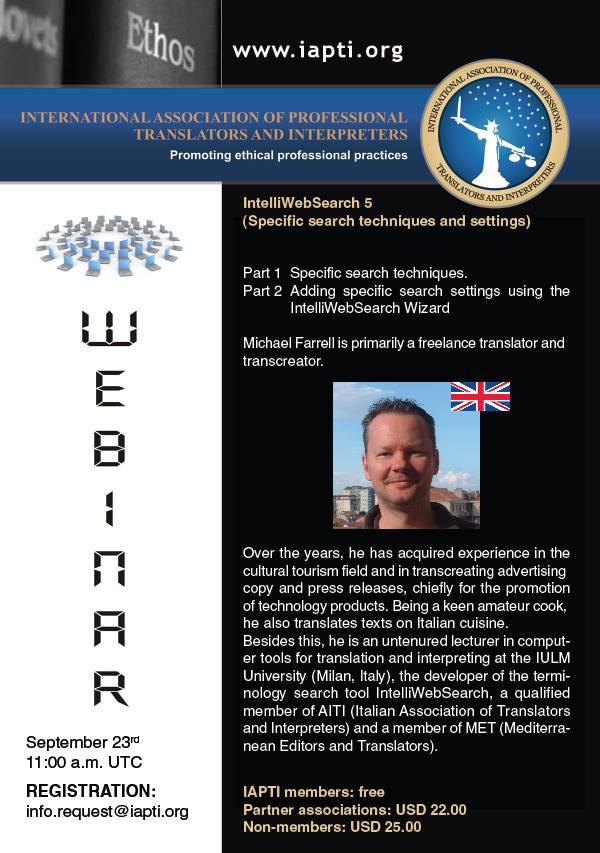 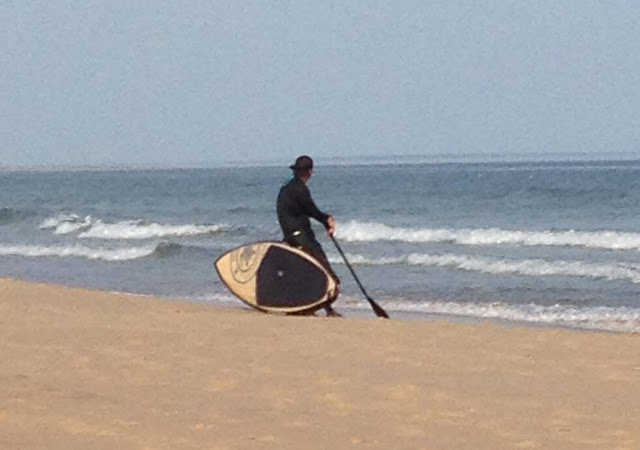 The pace of life is slow in the Algarve, but memoQ users would generally agree that big TMX imports to memoQ are a lot slower. Until now.

While on holiday I got a note from an occasional client, asking if I could take on the translation of a little Interessenabgleich for the next day. Not a problem I thought, though I had not yet imported the backup of my Big Mama TM with legal content onto the pokey Portuguese laptop I had dragged with me. With only 4 GB of RAM and the megatrojan known as Windows 10 it isn't much for crunching big data, but it is satisfyingly slow for demos and teaching classes, giving me plenty of time for questions and explanations while things load or refresh.

Nearly three hours later, the import was finished. So was I by that time; it was much too late to think of work any more. And the next morning, as I furiously worked to meet the deadline, a new update for memoQ appeared, which I was too muddle-headed to put off until I had delivered. After updating, not only was my license no longer recognized, I could not even boot the program to re-enter it! Welcome to Build 152! On another machine updated remotely, the update worked, but there was a funny conflict with Kilgray's standard template designations, causing the templates to be re-named.

The problems were sorted out by re-installing the build with a downloaded installation file from memoQ.com, and the job made it out on time. More glitches with term base editing and addition showed up later that day as I worked on another text. Grr.

Fortunately, Kilgray responds quickly to most issues, and the automated bug reporting features recently introduced are probably a great help in pinpointing troubles which users are too often reluctant to complain about. The next morning a patched version - Build 153 - was released. So far, so good with it.

The latest build introduces some interesting new features: among them are content extraction of more Microsoft Office object types, including equations (I've waited years for this!!!), for translation, faster TM imports, word count weighting, better tag handling, improved QA checks and some other things. Looking at all this will take some time, but it will be time well spent for my work purposes.

I was intrigued by the statement that "importing a TM with really many segments has just gotten up to 70 times faster", so I decided to test that with the file that bedeviled my evening recently. The problem with marketing hype is that it emphasizes exceptional cases and too seldom reflects what a typical work experience might be. And here too this is the case. The import of approximately 330,000 segments was completed in just under half an hour, about six times faster. Perhaps on my souped-up, RAM-rich machine in the office the difference might be more dramatic, but that is still a great improvement which will make me less hesitant to do maintenance on my large data sets.

memoQ 2015 has had a rockier road than any other version since the infamous memoQ Version 6 for which the code base was rewritten; a bit over a year since its release it still surprises me with inconvenient errors at inconvenient times, in contrast to my usual expectation of stability and reliability about four months after a major release. Actually, memoQ 2015 seemed to get to that point early in my working experience until about five months after its release, when in late autumn last year things went to Hell with SDL compatibility in many projects. Interesting new features, such as regex filters for the working grid and find/replace functions, continued to be added, but it all had a bit of a bleeding edge feel.

Now that memoQ has survived the awful transition to the me-too ribbon interface, it really is time to focus on stability and process reliability. The tool has become a major part of major corporate translation operations as well as the daily work of countless independent translators and we need stability to support our business more than we need new technotunes to whistle. I appreciate many of the features introduced in the past year very much, and I use a lot of them (the new keyboard shortcuts are my favorite for managing writes to termbases properly when I work), but I might trade it all if I can just be sure again that the software won't crash and burn me just before a translation is to be sent to a client.

I am confident that these matters will be addressed, but the matter of when is of critical importance for many. Issues of novelty versus reliability are hardly new in the software world; I have seen every variation of this for about 40 years now, and Kilgray generally, though not always, earns better marks than the competition. And even with the troubles that have beset memoQ 2015 (which have made it very desirable to keep older versions installed too) it is still the best - and most reliable - tool I have seen for the ways I work.