One of the things I have missed very much since switching from Déjà Vu to memoQ years ago is the ability to create and maintain selectable lists of metadata for classifying my data. One of the strengths of DVX was that this data could even be used to prioritize TM and terminology relevance during translation. But even for simple things like sorting and filtering data for an export, it can be very helpful.

Let me give an example. I have an old client I'll call National Translators. Well, sometimes that's the name I use when filling in the Client field for the memoQ project. Sometimes I write Nat'l Transl, sometimes it's NatTrans or even NT. And then when my fingers get rebellious I might have the occasional NtaTarns or worse.

Despite the messy appearance of screenshots of the TM and termbase lists in my various tutorials, for the most part I follow the "Big Mama and Papa" approach to data management with a large master TM and termbase with over a decade of archived reference material. But I do occasionally like to filter those data and produce a more focused termbase or TM for a projects, such as all the NatTrans material from projects involving Poultry. That was easy with Déjà Vu. Each client had a unique, selectable code. Subjects were number coded with a sophisticated classification scheme that I adapted for my own use. With memoQ it's been a real pain in the ass.

Well, it seems that times are a'changin. A little bit at least in this respect. One change that sort of slippe under my radar in memoQ 2013 was the addition of selectable data to projects through the use of the free Kilgray Language Terminal. I almost missed it completely, because I was looking at some of the latest "innovations" there from the wrong perspective. Wrong for me at least.


Kilgray recently introduced the ability to do basic project "management" on Language Terminal. Price lists. Clients lists. And more. I was appalled, or at least quite uninterested in that, though I rather like other aspects of Language Terminal. I have a good tool for quoting jobs and maintaining my client records, and I really don't think I'll be replacing that with the rather simple start that has been made by Kilgray in this area. And having lived in Germany for years, I have almost adopted the knee-jerk aversion to storing my client data online which is so common there.

But... there's another way. Better for me. I don't have to enter my clients' details. I can enter just the names. Or better yet - my preferred codes (which can protect their identities but let me sort my data better). Click on the screenshot above to see an example of this in the last two entries. You need not be as cryptic as I was in that example.

On the "Professional" page of my Language Terminal profile (the link to the left of "Clients"), I can enter my subjects. Kilgray intended this for their find-a-translator search function that they are adding to Language Terminal, but I'm probably not going to be interested in being found and approached by the sort of prospect that might use their database. My philosophy is that looking for a translator based on tool use is fundamentally backward, and I really don't want to support bad practices like that. Translators should be engaged based on subject and linguistic expertise; the translation technology involved is like a shirt, tie and a pair of shoes - you just put on what is appropriate for the occasion. But without the subject and linguistic competence, you really ought not to be part of the game at all.

So once again, I would enter my subject data on Language Terminal, not with the idea of being "found" by some Indian or Mongoloid agency to be offered the opportunity of a lifetime at 2 cents per word, but rather with an eye toward sensible data classification for use in filtering later. Here's an example of what these metadata entered on Language Terminal look like when you start a new memoQ project and mark it to be "entered" on Language Terminal. 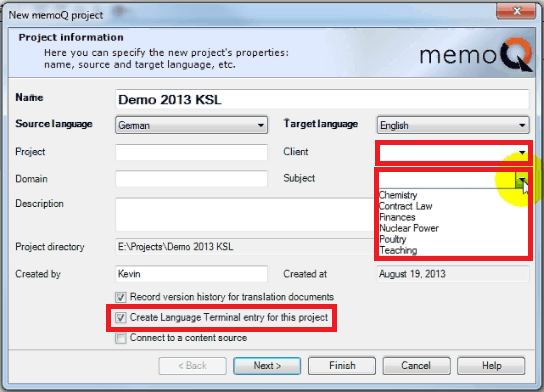 I still like the local DVX approach better for such metadata, but this is actually an improvement, and it will help me clean up my data organization. And using these features for my purposes, rather than the purposes for which they seem to have been created, will also maintain confidentiality as I want to. In fact, the profile seen here is not even viewable by other Language Terminal users.

There are many other very useful features of Language Terminal, which make it worthwhile to get a free account, even if you don't use memoQ. The blockbuster is still the free InDesign processing service, which enables one to handle native INDD files, get PDF previews at any time and convert InDesign files to XLIFF for convenient translation in most modern CAT tools. As a memoQ user, I find the backup feature useful as well; the Resources page is starting to get a few useful things, and rumors of future plans make me think this is really something to watch closely.

But this recent "revelation" of the possibility of selectable metadata for my memoQ projects is a small but very welcome addition to my toolbox in memoQ 2013, and finding this in an area of the site that I had already written off as uninteresting to me was perhaps the most pleasant surprise. It's nice to be wrong like that.
Posted by Kevin Lossner at 4:57 AM