Meltdown! Could this be YOUR laptop?

Last weekend I was shocked to see the report of German colleague Tanya Quintieri, whose laptop batteries suddenly exploded, destroying her computer while she worked. "There but for the Grace of God go I" was my thought at the time. I now no longer put my own laptop to sleep when I decide to give it a rest until the next day. I shut it off. Look at this mess and read her own words about what happened..... 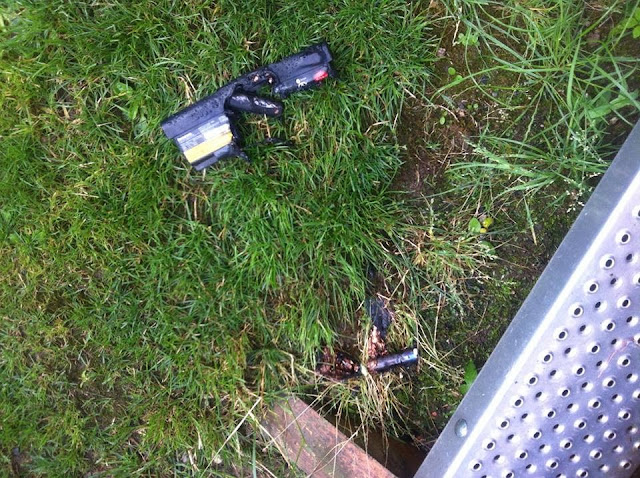 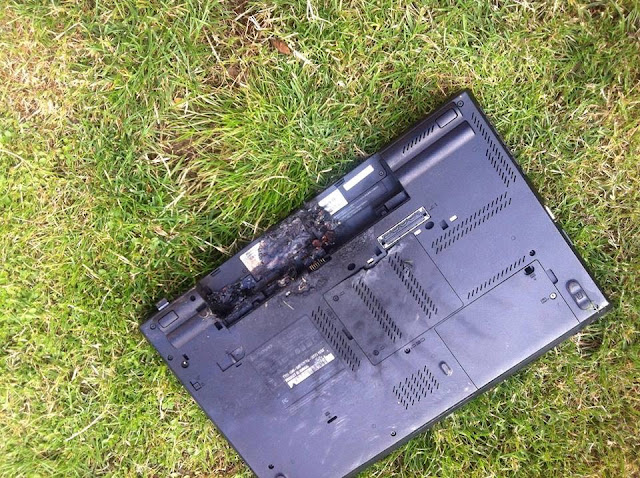 In 2010 I spent about €1800 on a Lenovo laptop. I wanted to have the best equipment available to do my work. I needed something reliable that would survive many hours of working per day and would not make any problems when I’m on the road, which I am quite frequently. Well – who would have thought that it would only last 3 years?

Last weekend I was sitting at my dining room table, typing a comment in the NT group on Facebook while taking a break from work. Thank God my dining room table is made of glass! Because, while I was typing, I suddenly noticed a hissing sound that came from my laptop. And within a second, there was an explosion! It was followed by a flame darting out from the back and at me from the gap between the keyboard and the screen. And yes, I still had my fingers on the keys – that’s how fast it went (and flying battery parts and the flames did burn the back of my hands, my arms, my fingertips and I had three holes in my t-shirt – but not bad burns! They’ve healed already!) .I jumped up from the table and ran down the hallway to get my fire extinguisher. Meanwhile my husband was trying to put out the fire using a towel. But that didn’t help. More fire, more smoke, lots of smoke! I handed him the fire extinguisher and he fired it off, but that didn’t help either, since the home edition is not made to fight chemical fires. So I called the fire department and asked them what to do and the guy on the phone asked: Can you bring it outside and water it from a safe distance? My dining room, which is open to the kitchen and the living room, had meanwhile filled up with nasty smelling smoke that made me choke. My husband tried grabbing the laptop to take it outside onto our patio and from there into the garden. But it kept on literally spitting flames and smoke. Eventually he managed to grab it and throw it onto the lawn in our garden. While it was flying through the air, there was a second huge explosion that blew the battery pack off the laptop. The parts landed several feet apart from each other on the lawn and we tried putting the fire out with water. There was another explosion, worse than the previous ones, and the damp grass actually started to burn. Eventually the water did put the fire out.

All of this happened within no more than 120 seconds. Since the battery pack was literally blown off the laptop and the laptop wasn’t hit with water, the hard drive survived. At least I didn’t lose any of my data. But as you can see in the pictures, the entire thing is simply waste now.

So – what had happened actually? I don’t know. I only know that I kept my laptop hooked up to the power cord at all times when I was in my office. I hardly ever shut it down. It wasn’t hot the day it happened. There was no direct sunlight. And had it happened 4 hours earlier, nobody would’ve been at home (except for my son who was asleep in his room on the first floor of our house. Would he have woken up in time to escape?). If it would’ve happened 24 hours earlier, I would have had that laptop on my lap. I don’t even want to think about what could have happened to my son or my legs.

So far, Lenovo hasn’t really responded to this case. And many of my colleagues are worried about their laptops (Lenovo is a popular brand among them). But I will be sure to keep them posted on what Lenovo has to say. Perhaps an entire battery pack series is affected, who knows. Truth is: This should not happen! The main board usually has an emergency shutdown for when the battery pack gets too hot. Well, it failed in my case and to be honest, this incident scared the heck out of me. I don’t handle such situations very well. I don’t know what would have happened, if my husband hadn’t been there. I would have freaked. And I don’t know what would have happened, had there been stacks of paper on the table as there are on my desk in my home office.

What did I learn? My next laptop is an Apple Mac Book Pro. They say that the battery pack is safe. I don’t know if that’s true. But I will make sure that I turn the laptop off whenever I’m traveling or I’m not around.

Posted by Kevin Lossner at 1:39 AM