Thank you to the team at SDL for a timely answer to my question. Although in most of the 13 years I've been translating commercially I have relied on other tools for the bulk of my processes, because these were generally more efficient or ergonomic than the available Trados technology, there are some things which SDL's products really excel at, and I often use various versions of Trados for preparing projects that I translate in Déjà Vu (once upon a time) and (now) memoQ.

However, when I upgraded to SDL Trados Studio 2009 some time ago, I missed the cutoff for the Studio 2011 update which soon appeared by a very short time. In most cases this didn't matter; my copy of Studio 2009 served me well for consolidating the TMs of translators migrating from OmegaT to memoQ and for testing a number of interoperability scenarios. But there were a few times that having SDL Trados Studio 2011 around would have been helpful, like the time I had to turn down the opportunity to translate a bunch of the latest Worldserver packages with some interesting content. And it gradually grew embarrassing to have to pester various colleagues to test processes on their Studio 2011 installations to be sure they really would work with all versions of Trados. After the long wait for that version to stabilize, I considered various upgrade opportunities, but the business case was always a bit borderline for me, because I will never "CAT hop" for translation. The efficiency loss is simply not worth it; if I ever do switch to some future version of SDL Trados Studio or another tool such as Fluency or My Incredible Translating Machine!, then my other tools will be relegated to project preparation tasks as Trados is now.

But with The Third Coming (SDL Trados 2014) on the horizon, I though that it is finally time to do the upgrade and have the full range of versions available for my process compatibility studies. 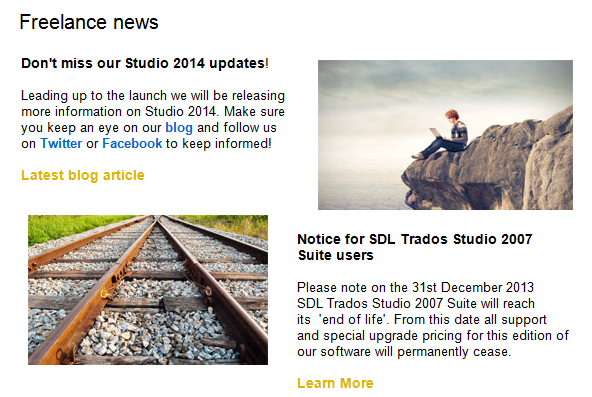 I am aware, of course, of the desire of many SDL Trados Studio users to jump off a cliff or lay themselves on train tracks to end the despair, but this condition is usually treatable by a good course of ACT (alternative CAT therapy), and as I have a cabinet full of that I'm not worried.

So I boldly logged on to the SDL translationzone.com site to explore my upgrade options. These were explained clearly enough, but after getting burned last time I was very careful about believing what I read, especially as the web pages I looked at freely swapped dollar and euro signs for prices as if these currencies were at parity. (It seems that the boys in Maidenhead figure that anything other than "real money" - GBP - is just play money anyway.) So I made a "quotation request" online, and two days later received a very kind response assuring me that an upgrade to my SDL Trados Studio 2009 Freelance Plus license to its Studio 2011 equivalent would indeed qualify me for a free upgrade to partake of the Third Coming Communion of 2014:

Dear Kevin
Thank you very much for your enquiry.
If you do upgrade now your SDL Trados Studio 2009 license you will receive Studio 2011 immediately and Studio 2014 when it releases in September.
The upgrade to Studio 2014 is therefor included in the price of your current upgrade.
The price is $235.

You can purchase directly online on our shop www.translationzone.com/shop/freelance-translator

Or Steve can also help you with an upgrade.

Fair enough all round. So I'll do this and be able to continue examining the best ways for people who follow different technology paths to continue working together successfully. And I can see whether I'm on Riccardo's side about the damned ribbons or whether Paul and Daniel are right. They certainly present some good arguments.

Posted by Kevin Lossner at 9:16 PM