For years I have been nagging Kilgray to add a preview for plain text files imported to memoQ. I translate quite a number of TXT files sometimes, and it bothers me not to be able to see the text in the preview as I work. The workaround I have used for this - resaving the file as RTF, DOC or DOCX - runs the risk of getting me in trouble if I don't remember to re-save as plain text before delivery.

While editing some video caption texts recently, it dawned on me that users now have another alternative. One of the quiet improvements made in memoQ 6.2 was the introduction of a preview for files imported with the Regex text filter. 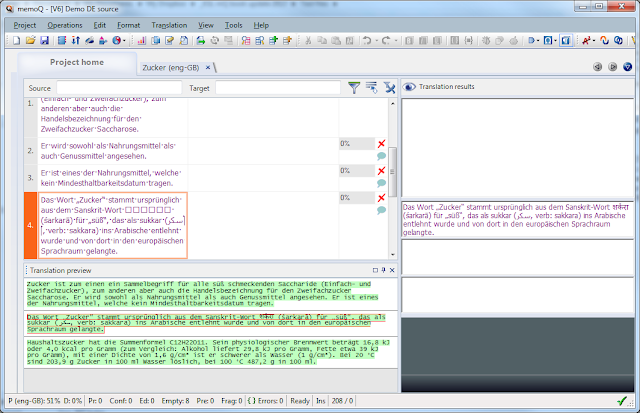 If a text file is brought into the project using Import with options... and the import filter is changed from the plain text filter to the regex text filter (with the defaults - no other settings needed), a preview will be created as shown in the screenshot above.

There will be lines between the paragraphs, and the imported text will have a green background highlight. A bit annoying perhaps, but better than the previous complete lack of a preview.

Those who work with Sanskrit and Arabic may note some minor problems in the example shown. I was a little surprised to notice that there were no problems displaying the words with other scripts on the right side of the working window, but the results in the translation grid are not quite as good. I thought perhaps this was due to my choice of display font, and that may be the case, as switching to Arial Unicode MS fixed all but the comma display, but perhaps there is more to the problem.
Posted by Kevin Lossner at 12:42 AM