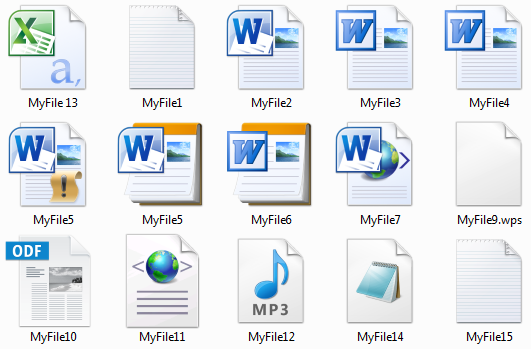 How many file types are there in the screen shot above?

Use your discerning eye and write your answer in the comments of this post. Anyone who figures out the correct answer and writes it as a comment before I update this post will be offered a special "reward" for clever deduction.

Update #1: A link to the solution has been posted in the comments. I will follow this up soon with a bit more explanation and a short video. In my comment with the solution, you'll also see why I hate Google's Blogger and don't recommend it to anyone, though I use it myself thanks to 5 years of habit. I'm the owner of the blog, and I can't even edit my own typos in comments, just in posts. Obviously, the Gods of Microsoft do not "thing". One would presume that they "think", however often the evidence of their actions may be against this.

Update #2: Hot summer nights are better suited to screencasting than sleep, so here is the video, a little sooner and longer than planned. But the part that actually matters (1:20 - 1:55) is in fact well under a minute.


This problem of hidden file extensions has come up so often in so many ways over the years. In the translation world of CAT tools I deal with, it comes up too often in discussions of how one can change the extension of an MQXLIFF file, for example, to XLIFF or XLF so that it can be imported by SDL Trados Studio or other tools.

I also have to deal with this problem when I send someone an RTF and a DOC file; these two file types are indistinguishable by icon, and without visible file extensions, it is fairly hopeless to discuss these files with anyone.

Posted by Kevin Lossner at 2:15 PM