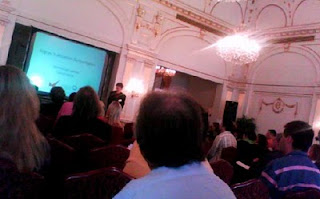 My intention to live blog this year's memoQfest 2010 didn't work out, though I managed a few pre-breakfast posts in the days before the conference and the occasional tweet during the sessions. There was simply too much going on. Either my full attention was focused on the great information and surprise announcements or I was out on the terrace of the beautiful venue at Restaurant Gundel recaffeinating my brain and trying to catch my breath for the next round. The event's location was much better than last year at Hotel Benczúr, which was quite adequate and which served as the location for the gala 5th birthday party for Kilgray on Thursday evening. The atmosphere was great, but it often went unnoticed, because many of the announcements and presentations had my attention in a mental vise grip. The riveting workshop by Angelika Zerfass on data migration best practices (to and from memoQ) on the day before the main conference was definitely a harbinger of what was to come: interoperability and integration of memoQ were in one way or another part of nearly every presentation. I think this reflects a broader industry trend which one can see with Kilgray's better competitors as well and of which SDL's move to XLIFF is a good example. But there's a special flavor to interoperability with memoQ which I really don't taste elsewhere and which is the result of the unique spicing of the company's support philosophy and its team's understanding that no matter how good tools and processes are what matters in the end are the people. This is so obvious in Kilgray's interactions with partners and customers that shortly before I was to deliver my own talk Friday morning on interoperability I threw out the script I had been preparing since November and talked about interoperability and the dignity of the participants in the processes, the translators, editors, clients and everyone else involved. The technical bits had already been covered in more detail than I will ever be capable of discussing.

There appears to be a perfect storm brewing in Budapest. But not a destructive one: already the pressure of innovation and good attitude from the east of Europe has caused the industry's biggest player to take some positive steps in the past two years which have benefitted many in our profession. And the teams and technologies I saw gathered at the conference in the past week promise a deluge of innovation and good practice that will benefit even those who can't be bothered with translation environment tools.

No, I haven't been oversampling the Unicum, nor am I being too caught up in my own rhetoric as I sometimes am. I just saw a lot of stuff that gives me just cause for optimism. Most importantly optimism about the ability of my colleagues, clients and others to work together more effectively no matter what religious TEnT they seek shelter in. Although it's really clear now even to those with the thickest skulls that Kilgray has got the innovation, attitude and endurance to go the distance with its best competitors in the translation tools field, the best news for me is that the company's real openness to that competition and Kilgray's commitment to making processes work as well as helping people work together in a reasonable way will help bring about that rising tide which lifts all boats.
Posted by Kevin Lossner at 4:02 AM