Listen to your lady

One of my personal projects which I enjoy greatly is translating choice passages from Diana, Hubertus und Ich by the once-famous equestrian and author of sports literature, Oscar Caminneci. I know some of his surviving family through breeders' circles for wire-haired vizslas, and Oscar's nephew Manfred and his wife Ingeborg have an excellent kennel in Germany, Haus Schladern.

The author had the misfortune to be caught up in the intrigues of the Third Reich when Ulrich Scherping, the regime's Oberstjägermeister, conspired to confiscate his hunting lands. Oscar was subsequently murdered in a concentration camp.

This light-hearted tale from his book of adventures demonstrates a lesson that all men must eventually learn if they are to succeed in life. Here is the German original, published in 1935, and my free adaptation in English, published with the permission of the Caminneci family. 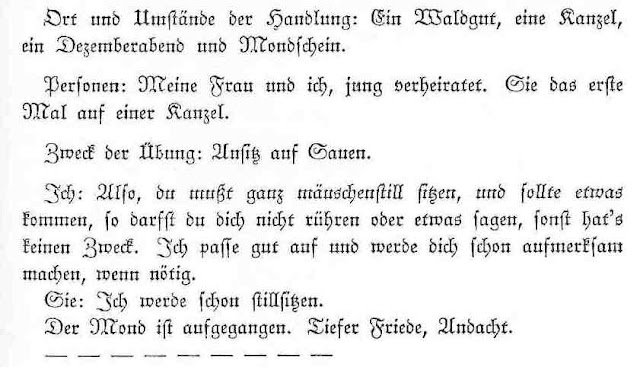 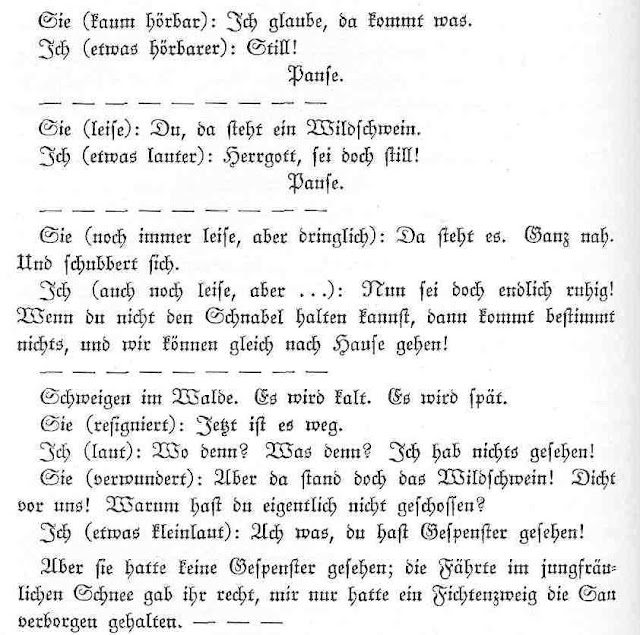 A Lovers' Hunt
by Oscar Caminneci
in Five Acts
translated and adapted by Kevin Lossner
***
Place and circumstances of the play:
Forested lands, a raised blind, a December evening and moonlight
Dramatis personae:
Mr. & Mrs. Caminneci, newly wed. It is the wife's first time in a raised blind.
Purpose of the evening's activity:
Waiting and watching, a boar hunt
***
Act One
He: Now you must sit still as a mouse, and in the event that something comes, you must not move nor say a thing, otherwise there's no point. I'll pay close attention and let you know if necessary.
She: Don't worry, I'll sit quietly.
The moon rises. It is peaceful, a time for meditation.
***
Act Two
She (barely audible): I believe something's coming.
He (somewhat more audibly): Be quiet!
Pause
***
Act Three
She (quietly): Oscar, there's a boar standing there.
He (somewhat louder): My God, will you shut up?!
Pause
***
Act Four
She (still quiet, but urgently): There it is. Very close. And it's scratching itself.
He (still quiet, but... ): Why won't you shut up at last?! If you can't clamp your beak then nothing will come for sure and we might as well go home now!
***
Act Five
Silence in the forest. It gets colder. It is late.
She (with resignation): Now it's gone.
He (loudly): Where? What? I didn't see a thing!
She (puzzled): But the boar was standing right there! Right in front of us! Why didn't you shoot?
He (somewhat sheepishly): Don't be silly. You just saw a ghost!
Her "ghost" left deep tracks in the virgin snow. A fir branch had blocked Oscar's view....

Posted by Kevin Lossner at 9:09 AM

Email ThisBlogThis!Share to TwitterShare to FacebookShare to Pinterest
Labels: literature