Better a bottle in front of me, than a frontal lobotomy.
- M. di Mayo, Ph.C. 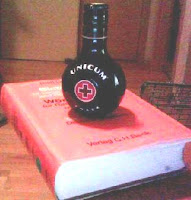 One of the brilliant presentations at the recent memoQfest 2010 in Budapest was by Isabella Moore, former head of the British Chambers of Commerce as well as past and present owner of COMTEC Translations in the UK. Speaking to agency owners, she advised them to develop an exit strategy with which they could reap the just rewards of their toil. This got me to thinking. Some of us translators work almost as hard as a PM, a few even as hard as an agency owner. But what options are open to those who choose not to tread the Golden Path of outsourcing and become, in stages, the next Lionbridge? What cash-out might a FREElancer pursue that might be more remunerative than Young Werther's? So I popped the question. (She was a little old for me, but it had been a long, lonely week, and I really wanted to know.) The answer, my friend, was a breezy platitude about "personal goals" and an example of someone who set up a community interpreting service. Interesting. Useful advice. But I was thinking, "That's a cash-out?" I was thinking more like beach, bikinis and Bacardi.

So I'm still thinking. I can packrat my bank account 'til it bursts and live on what leaks out afterward. Time's running out on that option for this old man, but for those of you who are young, an your marks, set and go. Don't worry about bank failures and hyperinflation, just trust in the markets and Lehman Bros. – uh, make that Goldman Sachs – and ALL WILL BE WELL.
I could hang out the red light and sell myself, but that wouldn't be much of a change from what I do for the marketing departments of some major German corporations. But I do sorta fancy changing my name to Roxanne. Maybe that should be my translation pseudonym. I'll sign certified patents with an extra flourish on the X.
My senile old tax consultant, the one who kept telling the German authorities I was in the import/export business because my e-mailed deliveries cross national borders, brought in fresh blood and lives on the stipend he gratefully pays for the chance to keep the customers she was in the process of losing. This time-honored system of professional succession has its attractions, and maybe this will be an effective way of convincing my daughter that she should still do as I say when she's 60 years old. But I have my doubts.
I could start outsourcing, build up a service organization, then sell it to Lionbr... oh wait, I already said I wouldn't go there. Human trafficking may be profitable and even legal in some jurisdictions, but something tells me it's so, so wrong.
I could just keep typing translations until my fingers drop off, then pick up where I stopped after I get a pro copy of Dragon Naturally Speaking. By then maybe the TEnT vendors will have the integration right. Oh wait – Kilgray already did that with version 4.2 of memoQ. Take your time, SDL ;-) Slow and unsteady wins the race, just ask Atril and PowerLing.
Now that might be the answer, for me at least. Keep going at what I love so much as long as my brain holds out, expose myself to the challenges and pleasures of evolving fields of interest until I am ready for the glue factory. And then when I can't do it any more, reach for my copy of DLDJW and read a few chapters for inspiration.
Posted by Kevin Lossner at 12:49 AM