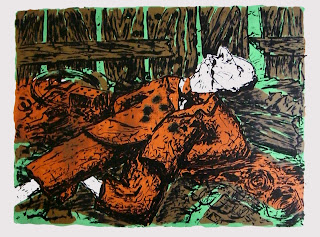 The painting shown here was created many years ago by Latvian translator and agency owner Uldis Liepkalns to commemorate the fall of the Romanian dictator Nicolae Ceaușescu. It's not the most beautiful of his works, but I think it captures the spirit of the bad end of a bad man rather appropriately. I'm grateful to Uldis for allowing me to post his work here; I've been thinking of it quite a lot in recent days as various Arab countries have ignited in popular revolt. At the ProZ conference in Prague I had the pleasure of meeting an Egyptian colleague who told me plainly what life was like under Mubarak, and I could not restrain myself from breaking into a bit of celebratory song in my Prussian chambers for him, his children and many others as his fellow citizens stood tall to take back their country. I found the news reports alternately appalling and inspiring, and I hope to have the privilege soon of visiting an Egypt more open to the needs of its people.

This image was particularly strong in my mind as I read the latest reports about the Libyan clown and butcher Muʿammar al-Qaḏḏāfī who has expressed his intent to die as a martyr. May he get his wish soon and slowly. A re-enactment of Mussolini's end came to mind for him as well.

My native country and my host country, as well as too many others, have been too often content to pursue the petrodollars of these kleptocrats and turn a blind eye to the suffering they created for their own people. But "liberation" in the style of President Shrub is no good solution either, I think. The people of these countries must choose their own moment and apply their own moral imperatives. When I think of the many valued colleagues who enrich my professional and personal life who spent their childhoods in dictatorships of varying degrees of awfulness, a few risking their futures as the "elite" of closed societies to bring about change, I am inspired by them and encouraged by the imperfect progress of the past twenty-some years. I wish the same or better for those beginning the journey toward new societies.

My western colleagues and I spend altogether too much time worrying about peanuts and status and respect for our profession. All of it important to some degree, I'll grant you. Bills must be paid, though frankly I don't give a damn if someone rates my status as a professional below that of my maid. Like Arlene once said to Richard, "What do you care what other people think?"

But I think it is important to care what people think of the current political upheavals and to take care and think ourselves about their significance and support the legitimate aspirations of those seeking a better life. And I think even a reflective atheist can hardly refrain from a prayer for their future. 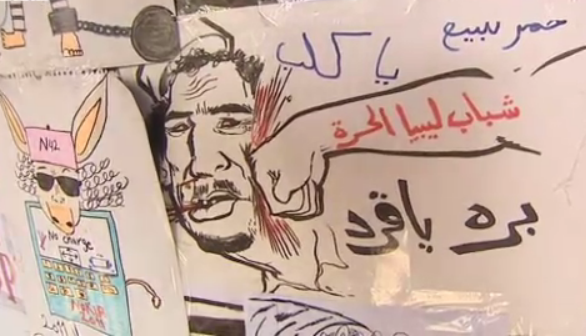