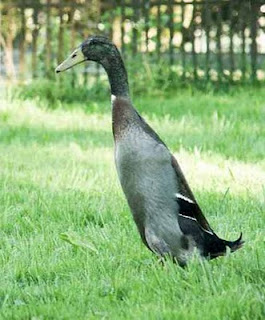 From the title I suppose I should make this another rant about the machine translation and those with a stake in it who try so hard to convince struggling translators (as well as those who don't struggle) that a Great Future awaits them as janitorial post-processors of the bilge spewed out by Wise Machines of Ever Loving Grace. But then it's hard to improve on Miguel Llorens' recent essay on why the MT crowd hates Google or Steve Vitek's latest comments, so I won't  try. I would much rather talk about my ducks. Really.

The last three months have been a time for Something Completely Different as I've readjusted to solo life and enjoyed re-established contact with my dog and my daughter who, in defiance of the counsel of her two translating parents, has decided to do what we do and be a conference interpreter as well rather than something more intellectually satisfying and/or socially rewarding like studying higher mathematics, chemistry or public sanitation. From my new base of operations in a former Napoleonic HQ I've been contemplating whether to extend my campaign against the wild boar to the steppes of Russia and how many birds I can manage in the large dovecote I have over my new stall space. On those rare days when the ground isn't frozen I've put gooseberries, raspberries, blackberries, white and red currants and a mirabelle tree in the garden, filled my living room with sprouting herbs and grafted apple trees (taking scions from my favorite tree at my former residence), and yesterday I picked up some runner ducks to fight the slugs I expect in the garden and keep me entertained. I used to have a drake of that breed as the wannabe leader of my small flock of geese at my farm in Oregon. He made me smile almost as much as the donkey Mathilda.

If it sounds like I've been doing almost everything but translating, that's largely correct. After nearly six years with almost no breaks in a workaholic relationship, it was time to pull the brake. Hard. For two years I watched at point blank range what decades of overwork can do to a highly productive person, and I could feel myself what toll a mere half decade was taking. Finding translation projects, even interesting ones, is easy in my language pair; if you're good and even moderately functional in matters of marketing and public relations, you'll fill up as much time as you care to. Thus it is particularly important to exercise restraint and care to do other things.

Now that I'm rested and have gone through a few months with a throttled income stream, it's time to stop tapping the savings and actually earn my way in the world again. I've never been unaware of the roadkill hazards of life in the fast lane, which is why I parked myself in the quiet countryside of Oregon decades ago to tend my garden and my animals and kids, but if you like people and feel a need to help them in difficult situations, it's all too easy to get drawn into the vortex, even though you know better. Alex Eames talks about this a little - the need for balance - in his new, improved advice guide for translators. For that matter, all the good "how to" books I've read so far for the profession of translation touch on this to some extent. That's probably because it's the most widely ignored good advice in our business.

Someone asked me a few months ago about my predictions for the future of translation and the translation industry (I originally wrote "translation injury* here - that tells you where my mind has been). I think the context was a discussion of the ludicrous forecast of a prominent globe-trotter who pushes MT like the dealers in a certain park in Berlin Kreuzberg push other things. I hear there may even be a panel at the upcoming memoQfest 2011 in Budapest to discuss such things, and if there is I'm sure it will be enlightening.

But I'm less concerned about the future of translation than I am about the futures of good translators. Those futures should hold more than whizbang hardware, cuddly CATs and sleeping under TEnTs under the watchful webcams of aforementioned Machines of Ever Loving Grace. One translator I know in Berlin has got it right. He's a bit of a dharma bum, disappears to the Far East for a good part of each year to see friends and family and hang out with smells and bells and funny guys in orange robes. And I am greatly encouraged by the fact that translation as a career is family friendly in ways that the rest of the working world will never be until it recognizes the wisdom of certain Nordic countries and establishes minimum quotas for women in upper management while forcing men to take the parenting leave that too many can't admit they want and that their children need in any case.

Tools aren't just for fools; they are an important part of the professional activities of a very great number of us, and I do not think that percentage will grow smaller. Who knows? Even MT may prove to have real value some day, though I expect I'll be transmuting lead into gold in my spare time long before then. But if you want to be your best as a translator and stay that way, get a life and put it first.


The picture of the Indian Runner Duck was clipped from a Wikimedia contribution by Nienetwiler under the Creative Commons Attribution 2.5 Switzerland license. My camera isn't working and this one looks just like one of my two boys, so I thought I'd use the pic.

Posted by Kevin Lossner at 9:20 PM