As I continue to unpack boxes from my recent move, I am discovering many useful things, albeit some a bit late, like a few invoices to pay and my ice cleats, which might have prevented a few bad falls some weeks ago. Among the more pleasant discoveries are my garden seeds and the latest BDÜ rate survey conducted in 2010 for the previous year. For some, these surveys may serve as a "seed" for better orientation in quoting jobs and planning business.

The surveys contain a lot of data; I could comment extensively on a lot of the trends I have seen since the first survey for 2007 was published, but sensibly such a commentary should be broken up into a number of smaller chunks for better mental digestion. Overall, I would say that the trends are not disastrous, but they should be a source of concern. However, the problems I see are hardly unique to language services.

First, let's look at a bit of raw data for my language pair (German to English):

The data for target line (1) rates in euros are as follows: 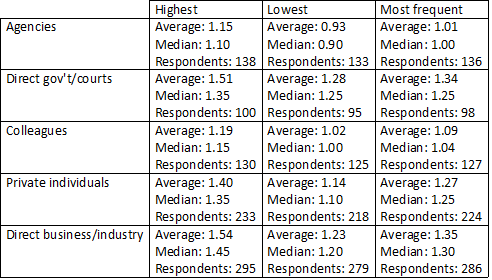 (1) 55 keystrokes including spaces in target text, a typical way of measuring translation text in German-speaking countries, because compound word structures often make word rates rather nonsensical despite statistical equivalence calculations with large samples. Traditionally, target text is counted because of difficulties in counting handwritten or other hardcopy source texts. 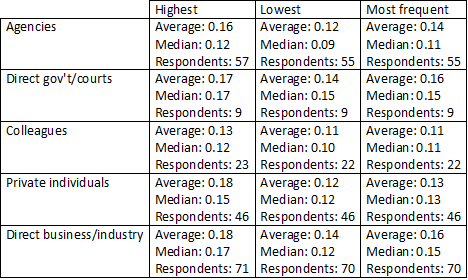 How do these different methods of calculation compare? I used Allesandra Muzzi's Fee Wizard, which draws on statistics from EU translation sources, to calculate the equivalence factor: 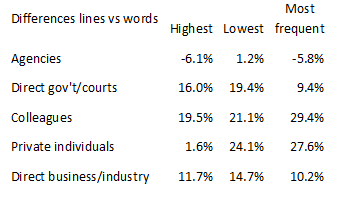 Word rates from agencies were actually slightly higher on the average than line rates, but generally the trend is that translators are charging less at word rates than at line rates. There are a number of possible reasons for this; the international market does indeed tend to deal in word rates rather than lines, but translators working the international market frequently use agencies, and there the differences are not so crass. Personally, I believe the problem is ignorance on the part of translators in Germany. Many simply do not understand how to calculate a word rate and accept whatever is offered or what they see in various online translation dumping portals. I have lost count of how many times German acquaintances have asked me how to quote a job at a word rate. Conversely, my colleagues abroad are generally baffled by line rates; I've explained them to one Dutch agency owner at least half a dozen times in the last 8 years and even created a calculation spreadsheet for him, and I still think he doesn't get it. Whenever a German customer asks for a line rate quote from him I get a call for help.

Lately I try to avoid the issue and just do lump sum project quotes where possible. Everyone understands the "bottom line".

This is the third year that the BDÜ has published a rate survey, so I decided to see how the averages of the most frequently reported rates have changed over those three years. This chart shows the trends for German to English in the various client categories: 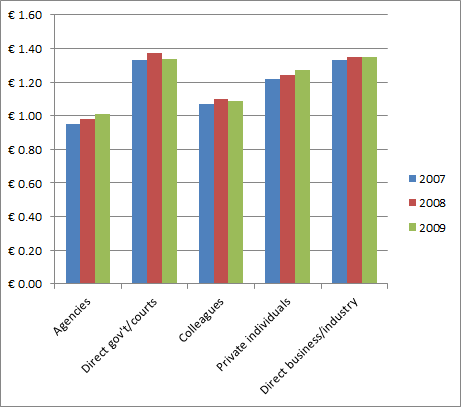 For English to German (the other direction), the data are as follows: 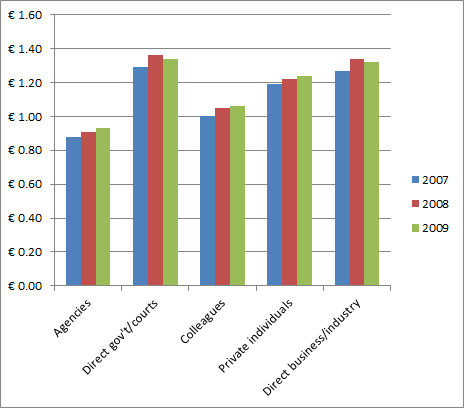 The BDÜ rate survey has quite a lot of data on other translation combinations, including some for English to French, Italian, Portuguese and Russian, as well as interpreting rates and other information. For a modest investment of € 15, the rate survey is a bargain for many of us. Copies can be ordered from the BDÜ web site.
Posted by Kevin Lossner at 2:52 PM