English to... with the BDÜ

As a number of my agency friends have mentioned to me over the years, English is often a "gateway language" in large translation projects, with the original source text (in whatever language) being translated into English and that translation being used as the starting point for further translations into third languages. This is because it is usually easier and cheaper to find a translator who knows English in addition to his or her native tongue than one who knows German or French, for example. Thus if I need a translation from German into Malay, I might have more options if I take the German > English > Malay route rather than go directly from German to Malay.

I rather doubt this is what is going on with the BDÜ data for translation from English into various other languages in the 2009 rate survey. The German association for translators and interpreters has many members of foreign origin in it, and some of these simply translate from English as a source language as well as from German. And as anyone involved with English in Germany knows, Germans are very fond of writing original source texts in English and usually do so far better than any native speaker of English could be expected to.

As might be expected, the highest numbers reporting are those for English to German. There is also, as I understand it and as one might expect, some serious competition for that combination in Germany. For most other languages, those wishing to work with local resources will have less of a selection (except for Russian - thanks to Germany's Ostpolitik there are quite a few Russians with distant German ancestors who have come heim ins Reich), so one might expect higher rates to be paid for English into those languages.

Here are the data for the averages of the most frequent rates charged by translators for the respective language combinations (English to German, French, Italian, Portuguese and Russian). Those who want all the data (with highest and lowest rates and medians) can purchase a copy of the full report from the BDÜ web site for € 15. These data may be useful for those in other countries who deal with clients based in Germany - this is what those clients can expect to pay close to home. The column labeled "Average N" contains the numerical average of the number of respondents for both categories; other labels should be obvious. 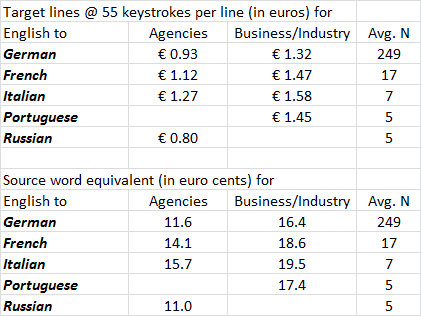 Source word equivalent data was calculated using Alessandra Muzzi's online Fee Wizard (which uses the EU translation databases for statistics), except for Russian, which I calculated myself using a few articles from Правда.
Posted by Kevin Lossner at 6:01 PM