Doing it by the hour with the BDÜ

Some have likened their translation efforts to working in a red light district, but in Germany at least, a bit of research soon reveals that most translators charge significantly below the going rate in the "sister profession" unless you consider the recent "flat rate" fad that made such a stir in the press some time ago. (This is the country where "Geiz ist geil" after all.)

The question of hourly rates comes up occasionally on online forums, and although I seldom charge by the hour for translation except when there is no other transparent way to bill, that is the way I always handle reviews (when I'm feeling masochistic enough to do them). So it's reasonable to ask what professional colleagues here typically charge by the hour for services.

I've included a sample of hourly rates that are relevant to me. Bear in mind that these are averages with fairly large samples. My own rates are significantly higher in nearly every category, and I know one agency that happily pays double the averages listed for agencies. In the end, it's usually a matter of negotiation and individual value delivered in a specific situation. The interesting consistency in rates for court work can be attributed to Germany's JVEG, the law governing compensation for such work. The complete survey can be ordered from the BDÜ web site for a mere 15 euros and is well worth the investment as a source of intelligent "intelligence".

Data for other languages are generally similar.

German to English (values in euros per hour) 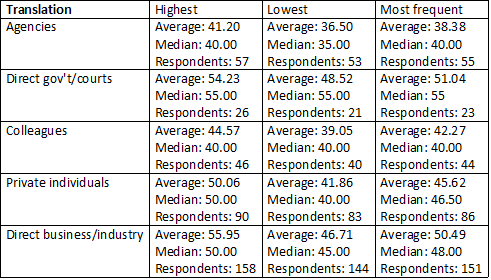 Values for interpreting are listed on pages 59 to 60 of the BDÜ report. These are broken down into categories for agencies, direct customers and colleagues according to whether the activity takes place at a trade show or as an escort, in courts or notary offices, for the police or public authorities, or negotiations.The range runs from about 35 euros/hour to 90 euros/hour. Police are the real cheapskates here, though not as bad as one agency I know that paid a friend 15 euros per hour to drive through a snowstorm to interpret while she was 8 months pregnant. But few people will put up with that sort of abuse. I hope.

And speaking of abuse...
... there is my all-time favorite activity: correction. Or "revision" as my British colleagues call it. Proofreading. Review. It goes by many names but as far as I am concerned can never be compensated highly enough. Here are the BDÜ data for English: 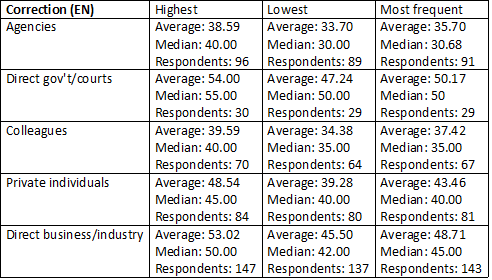 French and German are really not much different.
Posted by Kevin Lossner at 9:00 PM