Clarification on the new Trados pricing

In an earlier post I mentioned my shock at discovering the new prices for the version of Trados about to be released. Well, it seems there was a bit of a misunderstanding brought about in part by lack of attention to detail in the SDL Trados marketing efforts. Compare the following two screenshots: 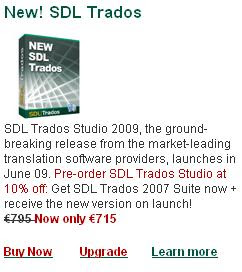 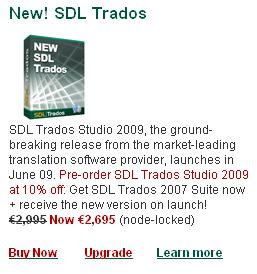 Which one says it's for the Freelance version? Which one says it's for the Professional version? The screens that follow provide clues in this respect, but these can be overlooked if one is already expecting something else, and in my case I'm used to another product calling the equivalent of the Trados Freelance version the "Professional" version. I keep forgetting that to SDL we freelancers simply aren't professional ;-) Or maybe just those of us who can't guess which ad is which are not.

Apparently there are two different banner ads on ProZ currently. As the images flashed by my eyes on the ProZ page, it wasn't at all obvious that what I clicked on for information would take me to the "lspzone" site instead of the "translationzone" site. Mea culpa. I guess I need to look more closely at the URLs when I'm dealing with information from SDL. Or at the screens. Up near the top it does say LSPzone, but I was so focused on finding out about the new version pricing that I had eyes only for the ad display. Too bad SDL left off the relevant designations there.

So anyway, the price issue seems to be settled, and here are the relevant prices I'll be confronted with for the two freelance licenses I own: 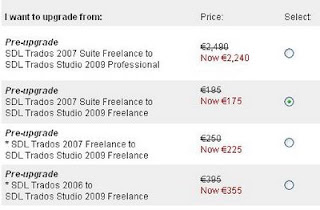 I can live with € 175 and € 355 respectively. But wait... there's another problem... if I were actually using those Trados licenses all the time I couldn't. Why not? Because Trados (at least in the current and past versions) is designed so that multiple freelance licenses cannot be operated on the same network. I once posted an angry note about this on ProZ when I discovered it (said note has quietly disappeared in the meantime), which prompted a late night call from a Trados VP who explained the rationale behind that "feature" and the fact that an upgrade to the "Professional" version was required, then kindly arranged to have a specially modified EXE file for Trados 2006 Freelance sent to me the next week so that I would not have to put up with that bullshit. The squeaky wheel gets the grease I suppose, but thousands of other freelancers were left to suffer or shell out major cash.

Competitive programs like Atril's Déjà Vu have equivalent versions for individuals and LSPs (DVX Professional and DVX Workgroup, for example), but there are no hassles running multiple freelance versions on one network. If you want the advantages of using the same TM on a server without screwing up your data you have to upgrade to the premium version, but that decision is left up to the user. But the Trados folks look at the world a little differently it seems, so one finds innumerable threads on the translators' forums in which possible workarounds for the problem of multiple Freelance versions on networks are discussed.

Now I do not know whether this licensing issue will persist in the new 2009 version of Trados. It would be quite useful to find out. If it does, then the competition will continue to have the advantage for small teams like mine. If the limitation will be scrapped, then hats off to the folks at SDL for doing the right thing at last.
Posted by Kevin Lossner at 3:53 PM