The other day I sent a friend some updated auto-translation rules for currency expressions; a short time later I received a message that they would not import into memoQ. The error message displayed was the following:

Now the problem here might seem obvious, but the name of the file I sent was nothing like any rule she already had installed,

In the example shown below, the source of the trouble is more obvious, but if there are a lot of resources in the list shown in the Resource Console or elsewhere, the redundancy of the name in the import dialog and an existing resource name in the list might not stand out so clearly.... 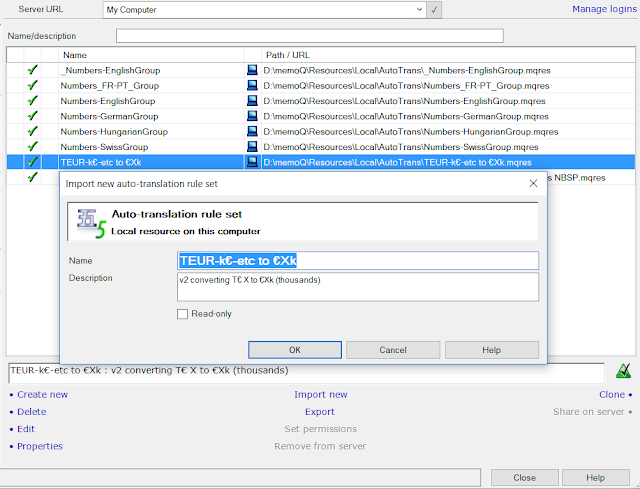 In the MQRES file (for the memoQ light resource), the "trouble  spot" is in the XML header at the top of the file. This can be seen by opening it in any text editor (in this case I used Notepad++ to show line numbering);

In this case, the fifth line contains the name that will be applied to the resource after it is imported. The <Name> tags are found in all kinds of memoQ light resources, and the same problem will occur if a redundancy is found during import. Here is an example from a memoQ ignore list (used to exclude certain words from error indications by spellchecking functions):

There are a couple of ways to avoid or correct these problems:
memoQ's "light resources" - the portable configurations and information lists to assist various translation tasks - are one of the environment's greatest strengths, but the generally bad state of the associated editing tools and unhelpful error handling continue to cause a lot of unnecessary confusion among users. Key people at Kilgray are not unaware of this problem, and for years there has been a debate regarding new features versus actual usability of the features already present. When you encounter difficulties like the one described above - or other troubles using this generally excellent, leading translation assistance tool - it is important to communicate your concerns to Kilgray Support (support@kilgray.com).

Without appropriate feedback from the wordface, there is often really no way for the designers and product engineers to understand and prioritize the challenges of usability. I can understand the reluctance of those who have used other tools for many years, where it was clear that their requests for bug fixes or other improvements were largely ignored, to take such action, but it really does make a difference, though not always on a time scale of hours or days. Weeks, months, sometimes years may pass before important changes are made, but usually this is because the urgency of the matter has not been communicated with sufficient clarity, or there are in fact, more pressing matters which require attention. But in fact no serious matters are seldom ignored by those responsible, as nine years as a satisfied user have shown me.

Posted by Kevin Lossner at 1:22 PM