OK, so I'm exaggerating a bit. And even though the new version of memoQ was officially released today by Kilgray, it really is still beta software. But damned good beta. I expect that there will be more of interest to individual translators added in this version of memoQ than in any other version I've seen up to now. Lots of T's to cross and i's to dot still, but there is great promise, and it's worth having a look now at the future of memoQ.

I'm not talking about changes to the memoQ Server. There are lots of those in this version, and for a change many of them actually seem to be helpful to translators working on the server and less focused on slicing and stuffing linguistic sausage faster like many of the 6.x server features introduced. The rollout webinar with István Lengyel and Florian Sachse of Kilgray showed enough of why memoQ Server users should be pleased. But they could have filled the hour and three quarters with nothing but presentations of new or improved functions for the rest of us and still not run out of material. Since I still have a project to finish tonight, I'll just hit a few of the highlights that I'll probably return to later as the features stabilize and are truly ready for productive work.

Language recognition
memoQ now intelligently recognizes the language(s) of the source text. This is a small convenience in setting up projects perhaps, but for those occasions when a source language has many passages in another language or more than one other language, these other language segments can be identified automatically, copied source to target and locked. I can think of more than a few patent dispute translations where this would have been helpful.

Startup Wizard
A new feature under the Help menu gives a quick, friendly guided tour of important settings that are often overlooked that are hard to find for new users and many experienced ones. This is actually one of my favorite new features and possibly the best help I've seen yet for making a better start with the software.

Better Microsoft Word spelling integration
Custom dictionaries can now be imported from Microsoft Word with greater ease. Users can now also choose Microsoft Word for dynamic marking of possible spelling errors (unknown words). This is a good thing for those of us who hate Hunspell. Oh, and those pesky doubled words are caught now.

More stuff with Microsoft Word...
like exporting tracked changes between translation versions to a DOCX file (sans formatting I think), exporting target comment to a DOCX file (alas! in writing the specification Kilgray failed to consider that one might want to select which comments get exported and possibly suppress all the comments, but I'm told this will be remedied quickly), font substitution in DOCX files (this was a major WTF feature for me, but if I understood correctly, there is some way I can use this to protect text formatted a certain way, such as code in a programming guide - if that's true, this is cool) and...

the TM lookup tool,
an external application which runs in Microsoft Word and any other environment and allows you to look up text copied to the Clipboard in selected memoQ TMs. Too bad they didn't include termbases in this new feature. Yet.

New filters and processes
like direct import of InDesign files with a preview using the free online Language Terminal integration, Adobe InCopy and some file formats that must be pretty damned geeky because I've never heard of them.

Why am I excited about
a plain text view which is about as exciting as lukewarm, unspiced pea soup. Well, because it's absence has been driving me nuts for years now. It's in this version.

Meanwhile, back at the termbase
great things are happening with new import options that are still a wee bit buggy but will get very good very soon. Until now memoQ could only import terms as TMX and delimited text. New options include Excel (at last!), MultiTerm XML and TBX. It was child's play for me to tweak a couple of TermStar MARTIF exports from STAR Transit to import those terms, because TBX is a dialect of MARTIF and STAR's MARTIF is very close to TBX. Extra effort? About 2 minutes of search and replace so I'm hoping Kilgray will go the extra five yards and touch this import option down.

The addition of the MultiTerm XML import option means that memoQ users can now roundtrip data from memoQ to partners using SDL MultiTerm and back for termbase updates. Unfortunately at the moment, the only meta data transferred in the import is the definition field, but efforts are in progress to support at least the MultiTerm fields memoQ exports to XML with Kilgray's own definition. That was simply forgotten at specification time (oops). But still, this will be serious headache relief for those of us who work in teams with SDL Trados users and want to share terminology in the most effective ways.

Is that all?
No. This new version of memoQ is like a very messy Christmas where one can easily lose the overview of hat's under the tree with all the wrapping paper and bits of ribbon cluttering the floor. As it gets cleaned up, we'll all notice a good bit more, and I suspect that Santa's Hungarian and German helpers will be slipping a few more things under the tree that they might forget themselves until some user trips over them. There has been so much effort put into consolidation and improvement of existing features that it's simply too much to keep track of. I've made a list and checked it more than twice and still find things to add. But I'll end with another look at something I've already blogged about, that groundbreaking

Monolingual Project and TM Update
with edited files in any target format. It still has a lot of little quirks, especially with some formats, but here I expect a lot of improvements. I've made a little demonstration video and put it on YouTube; it shows the reimport of edited translations to update the translated file and the TM in memoQ, and it shows two different ways to look at tracked changes before revealing the dark secret of Row History Recovery which I think Kilgray didn't realize was possible. Well, damnit, they should have made it a feature with a button anyway.


(View this in full screen mode by clicking the icon at the lower right of the video window.)

Oh yes, and one more cool little thing about this release that I forgot to mention...

... the quickstart shortcut to creating memoQ projects
in the context menu by right-clicking on a file. I'm not much into single-file projects any more and prefer to use "container" projects for customers or categories instead, but it's still a nice little addition that can save time once in a while: 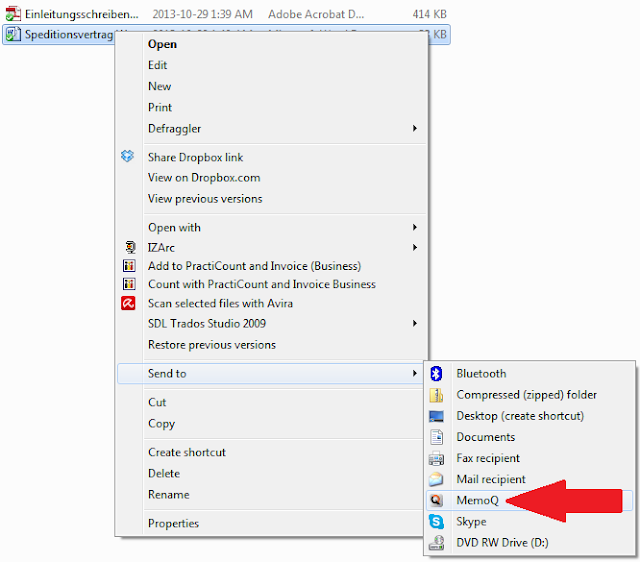