One never knows when a good idea might come up. This one isn't particularly original, in fact it's probably bleedin' obvious to the memoQ LiveDocs cognoscenti. I think it's drifted in and out of my mind a few times, but I never gave it much heed until a friend contacted me shortly before midnight with a slightly urgent question about what to do with an "XML terminology" that a client had sent. It turned out to be an SDL MultiTerm XML export but without a definition file. She wanted the data conveniently available in memoQ. Oh, crap, I thought. This could be a long night. Kilgray has added such capabilities to its qTerm server application, but the Fußvolk who use memoQ desktop versions don't have that option right now. And I shelved my XSLT efforts for this some time ago because nobody seemed seriously interested.

But then she said something about a "Word file". It turned out that the client had made one of those nice RTF dictionary exports that MultiTerm can produce and which was also the target of my XSLT work a year ago. This was exactly what I planned to make for her if the XML proved to be loaded with synonyms and term metadata. It was.

And then... I thought... why not just throw this in LiveDocs as a "monolingual" document? And thus a nice way to make complex glossary data available without importing it into a termbase was (re)born. Of course stuff like this has been going on for ages with Archivarius and other search tools. But not so much in an integrated way with CAT tools. Here's a quick visual tour of the process and the end result: 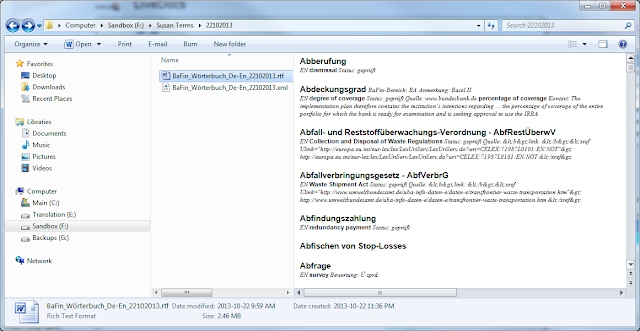 Here's the RTF file and a peek at the financial term data it contains. Not a chance I can parse that beast for a termbase! So I picked a LiveDocs corpus and clicked Import document and chose the RTF file: 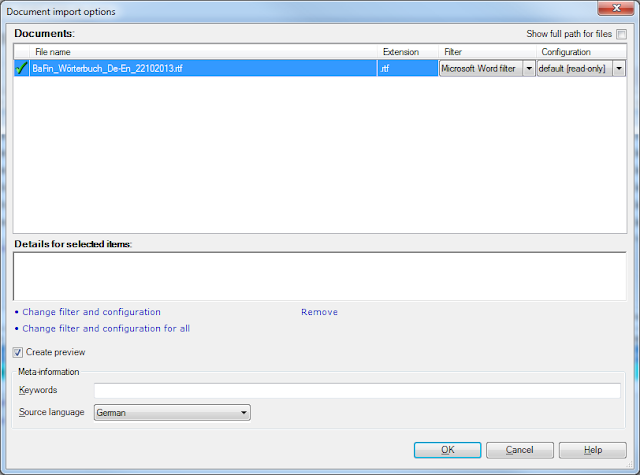 I lied and said it was "German". Well, that's partly true and in this case, the end justifies the means. 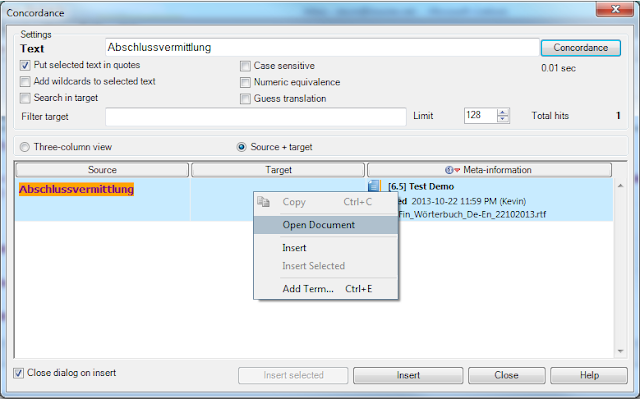 A few minutes later, this dictionary was available in an ordinary concordance search, its entire content indexed as "source" text. To see the context, I right-click on the concordance hit to open the document saved in the LiveDocs corpus. 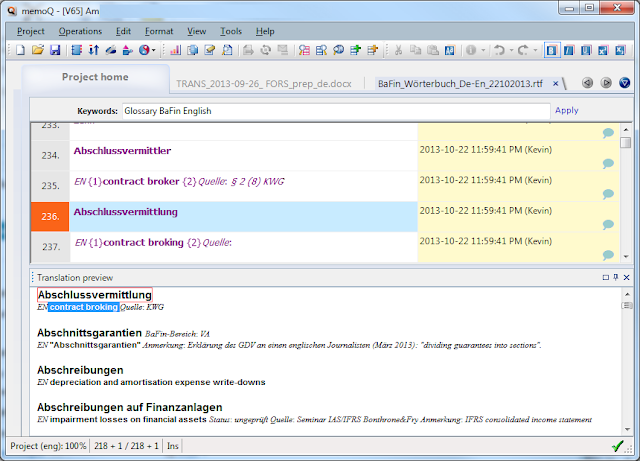 And here it is. I can do further searches within the document using Ctrl+F (Find). The English definition can be copied from here if I feel like doing that.

Now I know what I should do with that huge trilingual fire safety dictionary that's been kicking around my reference folders for the past 10 years... once again, LiveDocs made my day.
Posted by Kevin Lossner at 11:57 PM