The Next Big CAT Feature To Copy?

Thanks to the persistent disbelief of some users, particularly cranky financial and legal translators who don't understand the challenges of programming, that it really is "impossible" to enable a project or TM update based on an edited monolingual target text, Kilgray has decided to just do it and make this feature available to the masses with the next release, memoQ 2013 R2. It's not a perfect solution, but a great start, and when the rest of the specification is implemented later, it will be really, really good.

Here's an example of the first step reimporting a short text in which every sentence except the first was rewritten and rearranged (click the pic to see it full-sized): 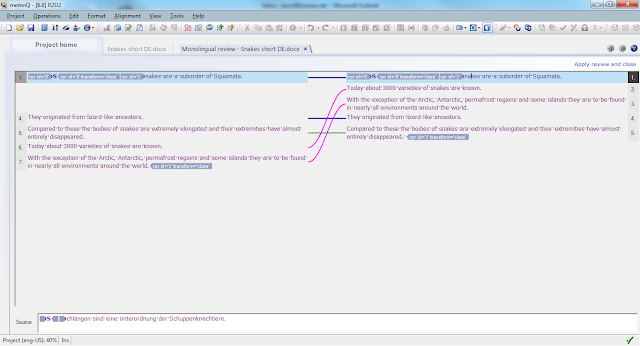 This monolingual alignment and the matches it assigned was totally automated - no adjustments by me. When applied to the translation document in memoQ, it doesn't change the order of the translation, but it does make updating the translation memory much easier. I can also use the tracked changes feature for versioning to look at the edits in more detail, and the view can be filtered to show the changes in a large document more clearly to ensure that nothing was missed.

What good is this? Well, so far Kilgray is rather fixated on the idea that one might receive edited documents from a proofreader or a client at some later date and import the changes to the project to update the TM. Maybe, but in many cases, this won't really happen in my workflow. If I finish I project, now I very often send the documents to a LiveDocs corpus, where they make a marvelous pseudo-TM (if a bit slow or slower sometimes) and an excellent context reference for concordance searches. I then delete the documents from the project, because I use projects as "containers" for repeated business, so unless some day the monolingual updates are made available for a document in LiveDocs, I may often not be able to take advantage of it. One could, of course, apply the same principle of monolingual alignment to a translation memory or even a TMX file, and I am sure somebody will do that before long if it doesn't already exist in some flaky academic freeware for supernerds somewhere.

So why am I so excited about this feature? Because I already use it every day. It saves me time and puts a big smile on my face. When I get ready to deliver  translation, the last step for me is to look at it in the source application - Microsoft Word, PowerPoint, etc. There I make last-minute adjustments, change words, combine sentences, split sentences, delete things, etc. A lot of these changes never make it back to the TM, because that maintenance can be a major pain in the backside, especially when there's a lot happening on my desk and in my e-mail inbox. This feature is a big step toward reducing that stress.

Kilgray isn't done with this by any means. Plans for source text merges to allow combined sentences in an edit to be handled easily have not been implemented yet, but I'm told that will follow no later than the next version. I hope so. The current beta version is also a bit dodgy with many formats I've tested so far beside DOCX and TXT, and changes of target text file type have been forbidden in the current version, as have any edits except segmentation adjustment and linking during the monolingual alignment.I plan a lot more testing to understand the limits of the current implementation, and I expect there will be many improvements in this area. But this is an excellent start.

When the specification was developed, Kilgray was unaware that something like this was already available from SDL in one of that company's pricy "regulatory" licenses (I wonder if the idea came from watching the video of the public argument about this option at memoQfest two years ago - I know that remarks about the SDL OpenExchange were followed closely). However, SDL has taken no great advantage of this to offer such a feature to a wider user base yet, so I have no idea how well it looks. But mark my words - in a few years, this innovation will be one of those things that users of any good CAT tool should take for granted!
Posted by Kevin Lossner at 1:57 PM