A tale for Halloween, perfectly horrifying! 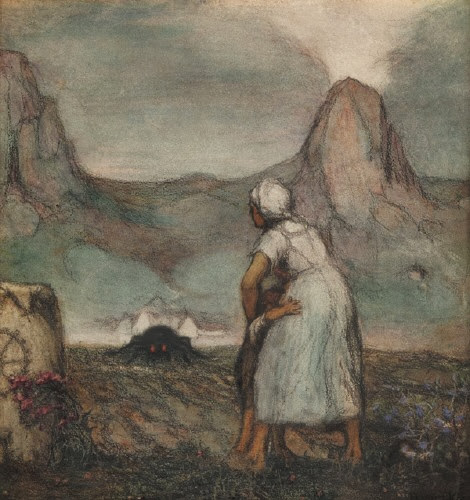 The night of terror began with a puzzling tweet in the afternoon:

I clicked the link and read the latest on Susan Bernofsky's Translationista blog,which gave an update on some of her recent work. An upcoming release of her translation of Kafka's The Metamorphosis was mentioned; that caught my eye since I had reread it in German very recently, and I find the variations in its translation quite interesting. I made a note to look at her version when it comes out in January.

Her blog post also mentioned the release last week of her translation of Die schwarze Spinne by a 19th century Swiss pastor writing under the name of Jeremias Gotthelf. The Black Spider? I grew up in a basement  bedroom well-stocked with black widow spiders, so the title had a certain creepy, nostalgic fascination for me. I was unaware of the high regard this novella was held in by so many, but the description of the tale on the blog and in the Wikipedia articles I read intrigued me, so I checked in at Amazon.de and bought a Kindle copy of the new translation. For good measure, I grabbed a copy of the original tale in German and treated myself to an atmospheric introduction of the story with the LibriVox audio recording by what sounds like an old guy with a Swiss German accent, like the grandfather who relates this moralistic tale of mortal terror.

The German audio recording was a bit fatiguing, gave me a claustrophobic feeling with its heavy diet of adjectives and too-familiar village custom. I began to feel a flashback the the Brandenburg hellhole I escaped from earlier this year and the suffocating customs of its denizens. With some desperation, I abandoned my plan to finish the entire work in German before starting Bernofsky's translation, so with a little twitch of guilt, I grabbed my bag and headed off to the cantinho for dinner in a quiet corner with my Kindle. Her translation started off with very much of a period feel, over-rich with its double serving of adjectives and long sentences that reminded me of my first encounters with John Stuart Mill in the tenth grade. I began to get the same claustrophobic feeling I had from the German reading, yes, I was back in Oberkrämer in Brandenburg and that's enough horror for one evening, thank you.

But gradually without realizing the art with which her well-crafted English drew me into the Swiss Calvinist spirit of the tale I was caught in a well-paced story that kept my interest and made me wonder if I would enjoy the original as much in some parts. And so I was drawn, unwitting, into the open jaws of Evil, which closed slowly about my torso and squeezed the breath out of me, leaving me gasping more than once and failing to notice that the liter of sangria had gone too fast before I ordered more to quench the burning horror unfolding. The walk home was too long, and the way could not be lit well enough.

At home I paused for a while, centered my mind by translating a deadly dull document with terms and conditions for purchase, went on a safer bug hunt in the latest beta version of memoQ and then, feeling that the house was much too dark, I screwed up my courage and lay down to sleep... well no, to read just a bit more, because those jaws were still closed around me, and the several dull pains about my sternum and spine made me wonder if my heart and bones would last to the end of the tale. Don't be so dramatic I thought, and I wasn't, really, the real drama was before my eyes, transfixing me in terror as wished the dogs would lie heavier on my legs and chest and distract me from the dark corners of the room I could not see because my eyes were on the shadows in the book and what waited so terribly in them.

This is a damned good translation. Maybe. Let me put it this way: I hope the original tale can live up to what I read tonight. But I'm not going to make the mistake of finding that out in the dark again.

Posted by Kevin Lossner at 3:13 AM