Versioning in memoQ: changes and a surprise

Versioning in memoQ, particularly the handling of changes in the translation of a given version of a source document, has had a rather "unfinished" feel since it was first introduced in memoQ 5.

It has generally suffered in the comparison with the implementation of tracked changes in SDL Trados Studio 2011, and rightly so. Even recent improvements in memoQ 6.2, with the addition of a command to revert to an earlier minor version in a comparison, falls far short of the ease of use of a function that enables one to move from one change to the next and accept, reject or further modify the changed text in a large document. [Update: this is not actually true - see the comments]

Tracked changes for minor versions is in need of improvement for ease of use, but I did discover one undocumented feature which gives it more redeeming value than I thought the feature had.

One tantalizing feature of memoQ version tracking is the Row History. I've always thought of it as an irritating tease, which it is. 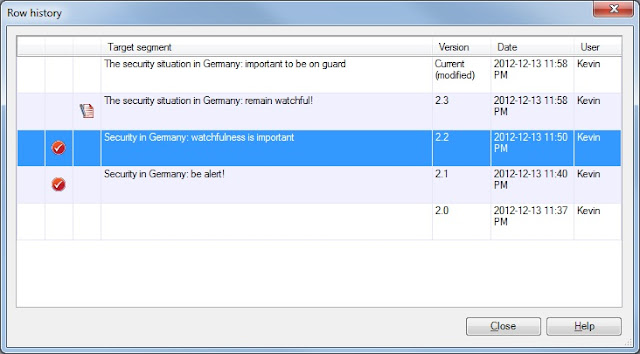 It shows you every change which has been made to a particular target segment during the translation and editing of a major version. But there is no way - no obvious way - to apply any of those previous versions to the target text. Ideally, one should be able to select one of the previous translations and replace the target segment with it.

In the example above, I have the display of tracked changes turned on, so it looks a bit messy. The view is cleaner without displaying the edits. As you can see, a bit more is copied than just the original text. That text is preceded by tree spaces, and the text from the version, date and user information is included and must be edited out.

Clearly, this was not an intended feature, but it has been there since versioning was first introduced in memoQ 5. Now if Kilgray would add a button for replacing the target text and perhaps an edit box as well where further changes can be made before replacing the current text, this feature would be much more useful.

A particularly ideal implementation might be the ability to move from one change to the next automatically and be able to accept the latest change or revert to any previous translation of the segment, all in one well-integrated operation. That's more or less what I've been waiting for in the year and a half since memoQ versioning was introduced.
Posted by Kevin Lossner at 12:40 AM