Prato on pretzels and my start in translation 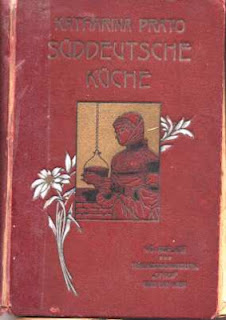 The holiday season is a time when many of us are involved cookery tasks of one sort or another, preparing for meals at family gatherings or making seasonal baked goods. At this time of year and on so many other occasions, my eyes drift to a red book that has accompanied me through countless moves in over thirty years and which I can often find quicker than my wallet or car keys.

Shortly after I began learning German in the ninth grade, an aunt of mine stopped by to visit my parents and gave me an old cookbook in German. How it came to her I have no idea; she didn't read the language, nor did anyone else on her side of the family. I was attracted to its old script, which one still encountered fairly often then in classroom libraries, university stacks and book piles at yard sales, but at that time I had not yet begun cooking beyond the occasional slice of cinnamon toast, so I hardly expected that many years later this book would still be with me when so many thousands of others had found their end with rats and mold in damp cellars and barns or disappeared to parts unknown in an ill-considered loan.

I soon found a use for the book, however. The German Club at my school had frequent parties, and members were expected to bring appropriate eatables to the occasions. I don't know any more who had the idea to do pretzels and strudel, but I soon found myself deciphering the 19th century text with the help of an old learner's dictionary and not much else. No public Internet in those days; in fact, the following year the Cybernet I used in the Cal State University system had its chat function shut down because it was considered a waste of resources. Online dictionaries and scanned texts were not even a distant dream. When all else failed, I think I bugged the German teacher, but she was bugged enough dealing with grammar and spelling acquired from my reading of Luther's original bible translation, so I tried not to do much of that. 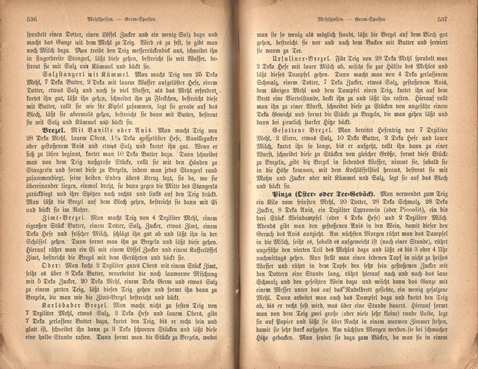 My first translation ever was, I think, for cinnamon pretzels. It was at the same time a clear lesson in the frequent need for translations to be adapted for their purpose.

Translating old texts like that taught me a lot of things. Even those who can't read German may notice that no times or temperatures are given. Those who think of recipes as precise prescriptions to be followed may be disturbed by the approximate nature of the quantities. And of course in another age, in another country, the units of measurement were different anyway. It's common enough for me to have to convert units from American recipes for German friends or vice versa, to convert volumes to weights to reflect different cooking customs or to explain patiently that units of the same name are very often not the same in England and California. And the yeast available in the 1890s was probably rather different than today's yeast, so indicated quantities are probably useless to a modern cook. Stick that in your engine, Gargle Translate!


Cinnamon pretzel. It makes dough from 4 deciliter meal, a piece of butter size of an egg, a yolk, salt, sugar, a little cinnamon, a Deka yeast and fresh milk, knocking him off good and let him go into the bowl. Then you form it into pretzels, and this can go. To this stirred an egg with a tablespoon of sugar and a teaspoon of cinnamon, sweeps the pretzel with the stirred and baked.

Yeah, right. A fourteen year old with a crappy dictionary can do better than that, though admittedly it does beat the standard of many German to English "translators" found on ProZ.

Make a glaze by beating together

The original translation was a collaborative effort with a monolingual subject matter expert - my mother - who had a much better idea of what to do with an oven than I did. My first attempt to use an oven in those days involved drying homemade gunpowder, and that did not go well. And now, some 37 years later, the recipe is being reworked for processing in a bread machine. Despite advertising from SDL and others, language and technology do change, and old information may indeed need to be retranslated. Today's text may not do for tomorrow's kitchen or even for a different cook today.

Posted by Kevin Lossner at 9:32 PM