Some time ago, I noted that SDL Trados Studio experiences difficulties importing XLIFF files in which the sublanguages are not exactly specified if the default languages are not set to the same major language. So if you plan to translate an XLIFF from memoQ or another tool in SDL Trados Studio, it is necessary to ask the one generating the file to specify the sublanguages or, if that is not practical, use the workaround described here. I discovered this bug before the release of the 2011 version of Studio and spoke to SDL development and management staff specifically about this at the TM Europe conference in Warsaw, but apparently this is not a priority to fix compared to other issues, and it may be a while before SDL Trados Studio users can work with client XLIFF files without coping with this headache.

Several of my client agencies using memoQ for project management have quite a number of freelance translators using various Trados versions and who have no intention to stop doing so. It's important to work smoothly with these resources in a compatible way, which also protects the data and formats. In a recent article on processing memoQ content with Trados TagEditor, I published a procedure I developed which enables the memoQ tags in the text of the bilingual RTF table export to be protected as tags when working in SDL Trados TagEditor. Now I would like to present a similar approach for Trados Studio users, which can serve as an alternative to XLIFF exchange. 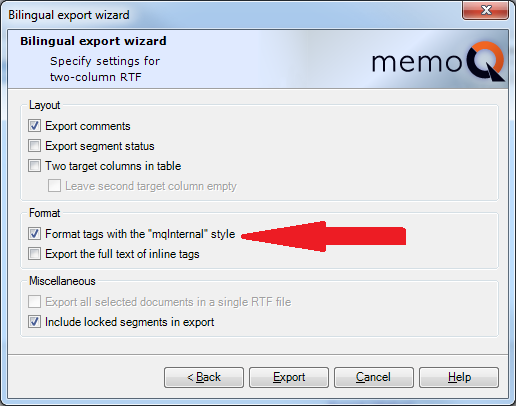 this style setting can be specified as non-translatable in SDL Trados Studio. To do this, select the menu choice Tools > Options, and in the dialog which appears under File Types, add the mqInternal style to the list of styles to be converted to internal tags in the appropriate formats (RTF, and just in case the file gets re-saved as a Microsoft Word document, for Microsoft Word 200-2003 and Microsoft Word 2007-2010 as well):


Once the mqInternal style has been entered this way in SDL Trados Studio, the prepared bilingual RTF file can be imported. "Preparation" for import includes copying the source text to the target and hiding all the text you do not intend to translate (the file header, the source column, and the comments and status columns if present). The result will look something like this:


Please note that the same procedure described for working with these files in TagEditor (hiding the red text of the tags, see the TagEditor article for details) also works for SDL Trados Studio, but this method involving the mqInternal style saves a few steps.
Posted by Kevin Lossner at 1:46 PM