As SDL Trados Studio gains acceptance, SDL's own flavor of XLIFF is encountered with increasing frequency by translators using other tools. I decided to test three of these to see how they fared: TagEditor (for "backward compatibility" with Trados users who haven't upgraded), the Open Source tool OmegaT and memoQ.

A simple DOCX test file was created, which looked like this:

It was opened in SDL Trados Studio 2009 and saved as an SDLXLIFF file, which was subsequently imported into each of the other three translation environment tools. 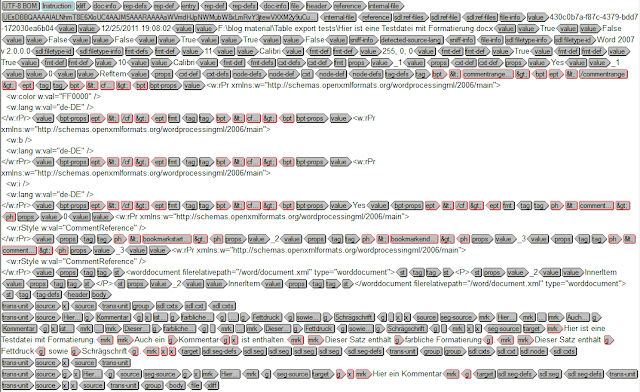 Some ugly tag salad there and exposed , vulnerable information from the header. Using the adapted INI file I made for memoQ XLF files, things improved a bit:

Still not very pretty, but it works, and it works better than an memoQ XLIFF currently does in TagEditor. No breaking of tags.

Translated and brought back into SDL Trados Studio, the translation grid looked like this with everything in good order:

The target DOCX file with the translation saved nicely and was perfect.

In real life, however, it may be necessary to adapt the INI file in TagEditor more extensively for good results. The German consultancy Loctimize has compiled some good instructions for doing so in which the entire workflow is also described nicely (in German). So far I haven't run across similar instructions in English.

A great start, much cleaner-looking than TagEditor! But when the translation was re-imported to SDl Trados Studio, a small problem was apparent:

One of the tags in the second segment was dropped. In a similar test with an XLIFF from memoQ, the version of OmegaT I tested (version 2.3.0, update 3) appeared to trash even more tags, and the target file was completely reformatted! In fact, it even trashed tags on the source side in the memoQ file! Thus I was deeply concerned about the XLIFF filter in OmegaT. However, as astute observers have noted, I probably deleted the missing tag when editing in OmegaT, and a subsequent successful re-test of the workflow confirmed this. But the problem with the XLF file from memoQ was frighteningly repeatable. Careful, systematic testing revealed, however, that the roundtrip of a bilingual XLF file from memoQ back into memoQ failed. Either there is a problem with the version I have installed (5.0.56) or the installation is corrupted. The matter is being pursued with Kilgray support. The target file from the SDLXLIFF translated with OmegaT was fine.


memoQ test
I have translated many SDLXLIFF files in memoQ and seldom encountered a problem of any kind. The file from SDL Trados Studio looks as follows in the memoQ environment:

Please note: with memoQ I can use an XLIFF which has not had the source copied to the target or one which has been pretranslated. That is not really the case for the other two environments tested, because with both TagEditor and OmegaT the source must be copied to the target or you have nothing to translate. You might say that memoQ offers "real" XLIFF editing for translation.

The SDLXLIFF file translated in memoQ reimported beautifully to SDL Trados Studio 2009 and saved to a target file (DOCX) from there with no problems.

Posted by Kevin Lossner at 8:47 PM