This tip is by no means new. The discussion of this issue goes back at least to 2007, when Kilgray's head of development stated that it was planned to make this particular configuration a little user-friendlier but that it wasn't a high priority. He was certainly right about that given all the challenges the software has met in the meantime in its development. I think that memoQ is clearly the best value today for freelance translators and SMEs (LSPs or companies that require a lot of translation) on the market today. Costs are modest and the usability is usually much better than the competition. However, there are still a few geeky potholes left in the configuration where even a geek can step in and break his foot if he isn't careful.

This feature isn't as annoying as, say, any memoQ configuration involving regular expressions. If you want to learn some creative Western American English, come to Berlin, buy me five or six beers and say the words "regular expressions". Wear a flak jacket just in case.

Every time I set up a memoQ project I have to go through the project setup wizard. This is a routine that users of many similar tools must endure as well. Some of us try to get around this by creating pseudo-templates or "master projects", but for me these workarounds are simply annoying. I want real project templates I can invoke from a list.

In the project wizard, one of the chief annoyances for me is the list of languages from which I almost always choose the same settings: German and English (the generic variants for both). Rarely I'll go for the EN-US setting and once every three full moons maybe a bit of EN-GB if I've had too much cider. So when I see that long dropdown list with every sort of Chinese, Edo, French and a zillion other languages of no use to me, it's hard not to grumble. Even the shortcut of hitting the first letter doesn't help that much in German, because there are a good number of other languages that precede it under "G".

There are a number of possible solutions to this issue in software design. One fairly simple method used by a number of applications is to place the most frequently used languages at the top of the list. Microsoft Word seems to do this with its language settings, for example. Another approach I found interesting for a web interface is the one used by LSP.net for the Online Translation Manager, where the administrator can specify a list of languages that appear as shortcuts under the dropdown field: 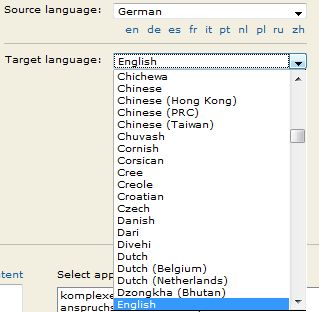 The screenshot above is from an agency that works with quite a few languages; I think those are the nine most frequent ones. Oops. Make that ten. I have enough trouble keeping track of the two I work with.

If you want to cut down the list of languages in your memoQ installation, the procedure is "simple", but not really user-friendly and not without risk. You also have to remember to back up the altered configuration file, because it will be blasted into oblivion by the next update. (Not sure if this tip from Kilgray refers to major updates or the frequent little improvements that are released almost weekly.)

The procedure was described like this in an online wiki:


Actually, this applies to source and target languages. And the path may vary depending on your version of memoQ and installation settings. I found the file on my new system here (after I changed the folder settings in the Windows to show hidden files): 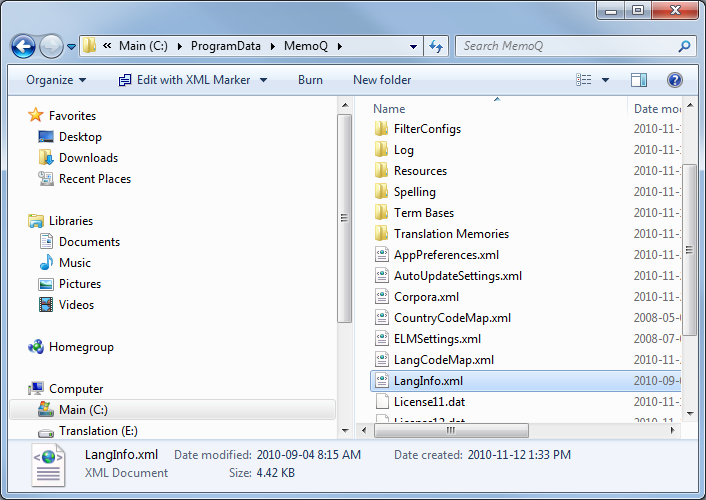 With your handy MS Notepad or an XML editor, you're ready to perform brain surgery on the XML configuration file and comment out the languages you don't need using the HTML/XML comment markers to enclose them in the list: 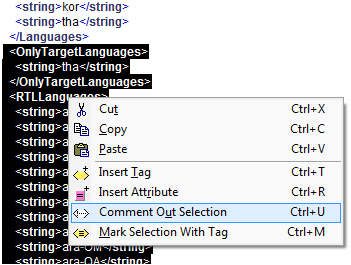 Here I used the free application XML Marker for convenience. However, this can be done in any text editor. The result in the LangInfo.xml file looks like this: 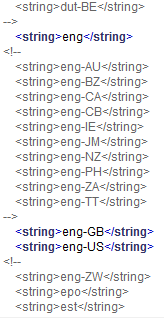 And in the Project Wizard of memoQ, the streamlined menu looks like this: 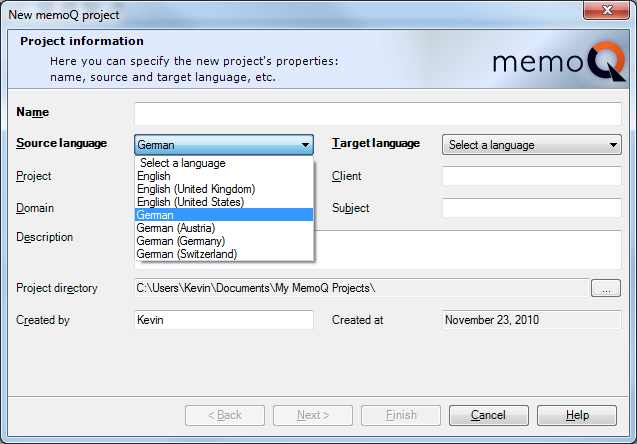 Really, I could and should trim it further. In any case, this is a small time-saver, but little bits of time add up. Many people have wished for some sort of improvement to the process of selecting project languages (defaults, anyone?), and I hope that one of these days this can make it a little farther up the feature priority list in some form. Until then, Dear Reader, you know what to do. (And if you do it, don't forget to back up the file!)
Posted by Kevin Lossner at 11:41 PM