A few weeks ago I had a call from a new client regarding a small job, and when I was asked about my rates, I tried to explain briefly how translators in Germany often calculate these and how he might estimate costs himself. Unfortunately, the explanation got "stuck" at the time, because we were using different versions of Microsoft Office. I was still enjoying the old Office 2003 package with a few upgrades to enable me to deal with Office 2007 files, but he had a shiny new computer with the latest MS Office 2010. When I referred to the "Tools" menu ("Extras" in German) and said to find the word count function under it, he informed me that this menu didn't exist in that version. Score another one for Microsoft in its 24-year effort to keep its users of Word teetering on the brink of frustrated insanity as the interface cards get remixed and the rules changed with every new version.

Last Friday I finally got my long-awaited new laptop to replace my utterly decrepit Toshiba with its troublesome keyboard that my local repair shop was unable or unwilling to replace. With it I got the latest MS Office version, so I too have made the Great Leap Forward into the abyss of the new interface. And although it may be a very obvious thing for many readers, I want to take this opportunity to show graphically how to find the new word count function in Microsoft Word 2010. If you are using an older version of Word and need to explain this to a client who has the latest version, perhaps this will help: 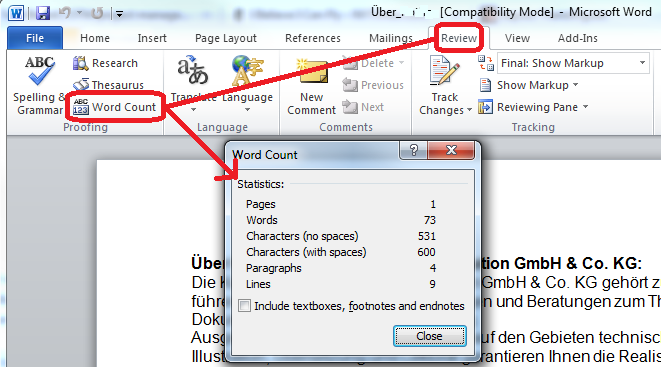 Addendum: Another alternative in Word 2007 & 2010, which was kindly pointed out by Victor Dewsbery in the comments for this post, is to use the function at the left of the bottom bar of the Word document window:

Double-clicking the count on the bar will open the word count dialog with the full statistics.
It is also interesting to note that text in text boxes is apparently counted, which was not the case in my old 2003 version of Microsoft Word. Here I created a small text file with 12 words distributed in the ordinary document body flow, a table and a text box. Then I selected three words in the table. The count shows both the selection (3 words) and the total (12 words):

Posted by Kevin Lossner at 3:40 PM