Get better dates with memoQ

There's hope for all those incels stuck with RWS Trados Studio, Memsource, Wordfast, OmegaT and a host of other horrors if they are willing to make a change.... 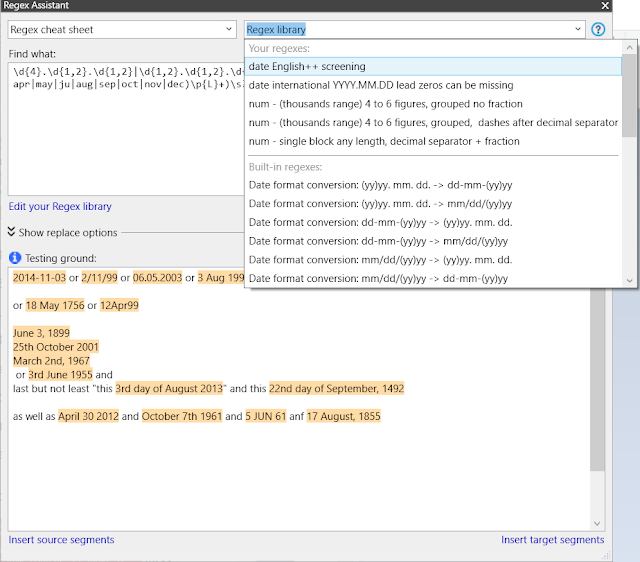 Not surprisingly, dates can be a real nuisance to translate and check, depending on the client's specifications. Target language specifications that include the use of elements such as non-breaking spaces can be particularly troublesome. But even apparently simple tasks like writing all dates in the target language as DDMonth-AbbreviatedYYYY or the like can go wrong far more than expected, and skilled reviewers easily get caught up in the flow of the text and overlook details of format (and often even correct content) in dates. This proved to be a shock to one LSP client who found hundreds of overlooked date errors in a large volume of recently reviewed text.

What's the solution to these inevitable human errors? Proper automation of the monkey work so professionals can concentrate on what they are good at: a fluent text that accurately reflects the intent of the original.

In the case of the QA horror of checking four source languages to ensure the dog's breakfast of date input formats (which also included day+month and month+year entries) regardless of capitalization, memoQ enabled a simple auto-translation ruleset to be created (a few hours' work, including testing and documentation); this was then attached to a project using a QA profile configured to check only against the enabled auto-translation rules, and BOOM! after about a minute, all the date errors in something like 100,000 translated words were revealed. The only false positives found were a few instances where times were written after the date, and the rule can be updated easily to avoid this issue.

I do a lot of date rule development for many languages, and I've published some of this in simplified forms on this blog. But interesting new tricks come up all the time. And I've found it useful when developing rules for others, who usually understand little about writing proper specifications that capture all the likely source input, to create special screening rules like the one shown in the first screenshot, which can be used to examine an entire large TM imported to the memoQ working grid, and see how the input and target texts vary. I used that expression on two large TMs in a view, and in just a few seconds, my laptop screen showed me all renderings of every English date in those TMs into Portuguese. While researching target formats for some new rules I also found quite a number of errors in the TM which I could have corrected had I cared to.

Having rules like this available in the translation phase can prevent quite a few errors to start with. I've found too many cases of dates in March translated as May and overlooked by both the translator and the reviewers. memoQ is - as far as I know - the only tool which will offer such conversions in a results table from which they can be inserted just like any other "terminology hit".

Other tools like RWS TradoZe Studio will allow you to use regular expressions for quality assurance (checking the text), but I'm not aware of any tool other than memoQ which allows you not only to include these checks in customized QA profiles but which can also provide them for on-the-fly review from a library of named expressions. That's what memoQ now does in version 9.8 (scheduled for release in June, within a few weeks) as shown in the first screenshot above.

This new rules library feature of memoQ makes it possible for the first time for users who have a life which does not involve wasting brain cells learning to program regular expressions to use the efforts of those who actually like that sort of thing and do it well. So with this tool, anyone can easily check for things like date errors and a lot more without knowing a single bit of regex syntax. That's some progress :-)

Stuff like dates just keeps getting better for memoQ users, leaving them more time for life and better stuff... like other kinds of dates.

If this kind of thing interests you, I think my friend Marek Pawelec may be teaching an in-person course in regular expressions for memoQ in July of this year, and he, I and others (including memoQ's Business Services unit) are available to help you with turnkey solutions to project challenges like those described here.

Posted by Kevin Lossner at 3:59 PM