Your language in Hey memoQ: recognition information for speech

There are quite a number of issues facing memoQ users who wish to make use of the new speech recognition feature – Hey memoQ – released recently with memoQ version 8.7. Some of these are of a temporary nature (workarounds and efforts to deal with bugs or shortcomings in the current release which can reasonably be expected to change soon), others – like basic information on commands for iOS dictation and what options have been implemented for your language – might not be so easy to work out. My own research in this area for English, German and Portuguese has revealed a lot of errors in some of the information sources, so often I have to take what I find and try it out in chat dictation, e-mail messages or the Notes app (my favorite record-keeping tool for such things) on the iOS device. This is the "baseline" for evaluating how Hey memoQ should transcribe text in a given language.

But where do you find this information? One of the best way might be a Google Advanced Search on Apple's support site. Like this one, for example: 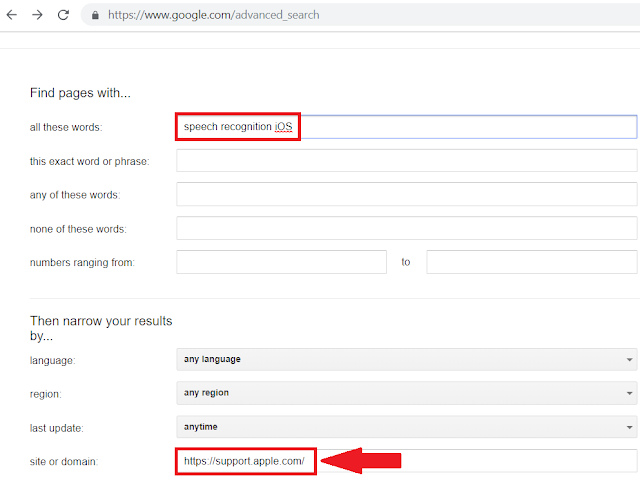 The same search (or another) can be made by adding the site specification after your search terms in an ordinary Google search:

The results lists from these searches reveal quite a number of relevant articles about iOS dictation in English. And by hacking the URLs on certain pages and substituting the language code desired, one can get to the information page on commands available for that language. Examples include:
All the same page, with slightly modified URLs.

The same information (if available) for other languages is found just by tweaking the URL:


and so on. Some guidance on Apple's choice of codes for language variants is here, but I often end up getting to where I want to go by guesswork. The Microsoft Azure page for speech API support might be more helpful to figure out how to tweak the Apple Support URLs.

When you edit the commands list, you should be aware of a few things to avoid errors.

The difficulties involved in command development at this stage are surely why only one finished command set (for the English variants) for memoQ-specific commands was released at first. But that makes it all the more important to make command sets "light resources" in memoQ, which can be easily exported and exchanged with others.

At the present stage, I see the need for developing and/or fixing the Hey memoQ app in the following ways:
Overall, I think that Hey memoQ represents a great start in making speech recognition available in a useful way in a desktop translation environment tool and making the case for more extensive investments in speech recognition technology to improve accessibility and ergonomics for working translators.

Of course, speech recognition brings with it a number of different challenges for reviewing work: mistakes (or "dictos" as they are sometimes called, a riff on keyboard "typos") are often harder to catch, especially if one is reviewing directly after translating and the memory of intended text is perhaps fresh enough to override in perception what the eye actually sees. So maybe before long we'll see an integrated read-back feature in memoQ, which could also benefit people who don't work with speech recognition.

Since I began using speech recognition a lot for my work (to cope with occasionally unbearable pain from gout), I have had to adopt the habit of reading everything out loud after I translate, because I have found this to be the best way to catch my errors or to recognize where the text could use a rhetorical makeover. (The read-back function of Dragon NaturallySpeaking in English is a nightmare, randomly confusing definite and indefinite articles, but other tools might be usable now for external review and should probably be applied to target columns in an exported RTF bilingual file to facilitate re-import of corrections to the memoQ environment, though the monolingual review feature for importing edited target text files and keeping project resources up-to-date is also a good option.)

As I have worked with the first release of Hey memoQ, I have noticed quite a few little details where small refinements or extensions to the app could help my workflow. And the same will be true, I am sure, with most others who use this tool. It is particularly important at this stage that those of us who are using and/or testing this early version communicate with the development team (in the form of e-mail to memoQ Support - support@memoq.com - with suggestions or observations). This will be the fastest way to see improvements I think.

In the future, I would be surprised if applications like this did not develop to cover other input methods (besides an iOS device like an iPhone or iPad). But I think it's important to focus on taking this initial platform as far as it can go so that we can all see the working functionality that is missing, so that as the APIs for relevant operating systems develop further to support speech recognition (especially the Holy Grail for many of us, trainable vocabulary like we have in Dragon NaturallySpeaking and a very few other applications). Some of what we are looking for may be in the Nuance software development kits (SDKs) for speech recognition, which I suggested using some years ago because they offer customizable vocabularies at higher levels of licensing, but this would represent a much greater and more speculative investment in an area of technology that is still subject to a lot of misunderstanding and misrepresentation.

Posted by Kevin Lossner at 6:50 PM