My first project with memoQ 2014 Release 2

When I got my first look at the test version of the upcoming memoQ release, memoQ 2014 R2, I argued with  Kilgray that it ought to be called memoQ 2015 instead, not only because the year 2014 is almost over, but because this software represents a major break with the old interface design. Kilgray likes to point out that there are not so many new features being introduced here - perhaps a mere "dozen" give or take a bit - but just one of these - the new ribbon interface - has its own 50 page manual. Meu deus.

On the whole I am coming to view the rapid pace of development for some CAT tools in a rather negative light. I rather like the current memoQ 2014 release, but I am not even close to coming to grips with the 70+ new features introduced earlier this year (which has probably grown to 100+, depending on how you want to count them). I think back to my experiences as a corporate systems consultant in the archiving and document management sector and those working with a state department of transportation before that, where many thousands of networked workstations and other systems had to be managed for maximum productivity and minimum disruption. It took me a while back then to understand why, after many months of thorough testing at enormous cost, an upgrade for  something like Internet Explorer was permitted for the version two whole numbers below the current one. I eventually learned that these big organizations were not so dumb after all: being on the "leading edge" is too often the same as the "bleeding edge", which can have considerable, unanticipated costs.

This is the reason why for years I have advised my clients and colleagues not to consider new versions of any tool for routine production use until several months at least past its release date, and to use "roundtrip testing" in every instance to ensure that a technically usable result can be obtained from every project. Ultimately, Kilgray and others are going to have to determine whether constantly stirring the feature pot in a way that too often makes established workflows obsolete is in the best interests of their clientele and market future. Despite all the trendy talk of the benefits of disruption and "creative destruction" I am unconvinced that this is the case.

However, I do see very good reasons for the major changes to the interface in memoQ 21014 Release 2, and I think that new features like the limited sharing of online translation memories and termbases (with an open API in the future to allow access by other tools I'm told) are an excellent intermediate stage for those who aren't quite ready to move up to a team server solution like memoQ Cloud or the greater access capacity of the full memoQ Server license but who still need realtime data sharing for projects with a partner from time to time.

Kilgray's blog has a good post describing the basic shift in the logic of the environment from cataloging commands as one might in a library or inventory system to organization by the normal sequence of work. This makes a lot of sense, and this is also the way I teach new users to use the software, with small sets of features organized according to the sequence of typical work. 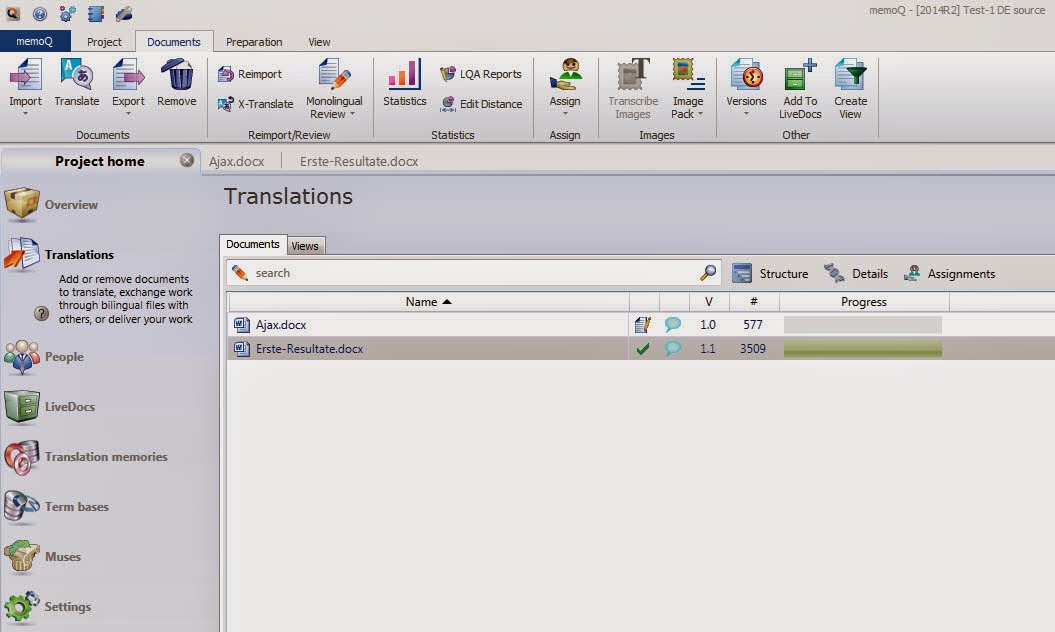 After spending about a week just staring at the new ribbons, I decided to do my first small, low-risk commercial project with the test version. Everything went quite well, but I had to fight a sense of disorientation as I kept looking for commands in the lower area of the screen, which is now free for viewing more files and file information in a project. In some cases, I had to get used to clicking on the little arrows under icons rather than the icons themselves. Nothing I needed was difficult to locate, but as a longtime user of memoQ with many ingrained habits, I will take some time getting used to this, after which my work will probably proceed even more smoothly. In any case, it is clear to me that new users will find their way more quickly with this new, workflow-based interface.

This impression of greater ease for new users was reinforced by remarks from a colleague in my office a few days ago. Her professional background prior to her activities in translation was as an educational psychologist and adult education teacher, and when I began to complain about how awful the new ribbons were and how uncomfortable I felt with them, she patiently explained how I had it all wrong and why the new design was much more logical and easier to use. Years ago I teased SDL Trados users who bitched at first about the change from the nasty old over/under TWB interface to the tabular working environment of SDL Trados Studio only to become enthusiasts later when they realized how much their workflows had improved; I fear that I will also become a just target for such teasing.

I don't want to admit it, really, but I am already beginning to like those awful ribbons, which are perhaps rather useful after all. And if I really don't want to look at them, they can be hidden with just a click, leaving me with even more working space on my screen. So all right, I'll say it. Reluctantly. Good job, Kilgray.

Now who is going to re-do all the screenshots and videos for my tutorials?
Posted by Kevin Lossner at 6:33 PM