On a role with memoQ!

This morning I finished off a job I shared with another colleague, sent him the target document and a memoQ MQXLZ file for any edits he might want to make before dumping it in his TM or LiveDocs archive. I went on to other things and didn't see his message until about six hours later. He could not edit my bilingual file! What was wrong?!

I was "on a role" you might say. But not on a roll. Not today. I had not stopped to think that although the method I had used to review my work is popular with some freelance translators using memoQ, most of us do not use roles in our own projects, and few understand what they actually do. But roles can be an effective addition to our workflows and enable us to keep a better overview of a translation's status.

When working in a local memoQ project, you can assume one of three roles at a time: translator, first reviewer or second reviewer. The default role is always "translator".

Each role applies a different status when segments in the translation grid are confirmed:
The confirmation settings you choose under Project home > Settings determine which of these three roles you work in. You can also set your role in recent versions of memoQ using the dropdown menu in the far right section of the translation window's toolbar. The icon for the dropdown menu reflects your current role:

When segments are confirmed in different roles, the status icon will be different:

What use is that to a translator working alone? For a long time, my instinct was to say "none at all" and think of this as a feature of interest only to team processes. Too often I'm a team of one these days.

But on a number of jobs lately, I've found myself scribbling Post-It notes about which parts of a long job I had already checked, and it occurred to me that these roles might help. I've also grown fond of the X-Translate feature for new source text versions, where I usually protect content which has been carefully reviewed before if it has not changed. So the idea of doing a "final review" of some sections and protecting them by confirming in the Reviewer 2 role was appealing.

So, like some others, I have begun to switch roles in memoQ when I am carrying out different tasks. And the different confirmation icons - the check, check+ and double-check - give me a simple visual clue as to where I have worked with what purpose.

Another nice feature I use a lot is the Row History in the context menu. It shows me the translation of that segment for each minor version. If I am making a lot of edits and want to remember a particular translation, I use Operations > Create Snapshot... to make a new minor version for later reference. Minor versions are also created automatically with various operations such as target text export and exporting bilinguals. The row history shows all versions of the translation for the current source text (major version): 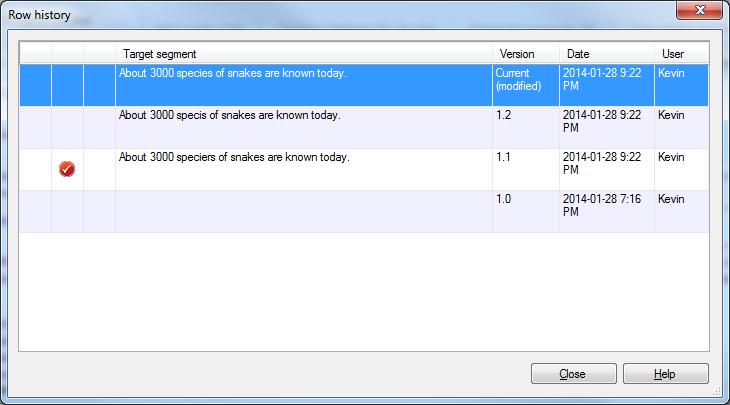 Text of previous translations can be copied to restore using Ctrl+C. Unfortunately, despite  requests, Kilgray has not yet seen fit to do the obvious and add a button for conveniently inserting other versions of a translation in the row history.

So what about my frustrated colleague who couldn't update the text in my "proofread" bilingual? How can he, a mere Translator, override my work in a superior role? By giving himself a "promotion" and choosing the Reviewer 2 role from the toolbar or his confirmation status in the project settings to Proofread.

For a discussion of how roles can affect what is written to a TM, see this old article on memoQ TM settings. The defaults have now been changed so that roles are no longer automatically stored in the TM, so if you are working with the default TM settings for memoQ 2013 R2 Build 53 or later, you don't have to worry about changing the defaults as I discuss in the old article.
Posted by Kevin Lossner at 8:53 PM