In the comments of my recent post on the memoQ TM search tool, I mentioned a possibility for using that feature to "de-junk" and simplify concordance searches. 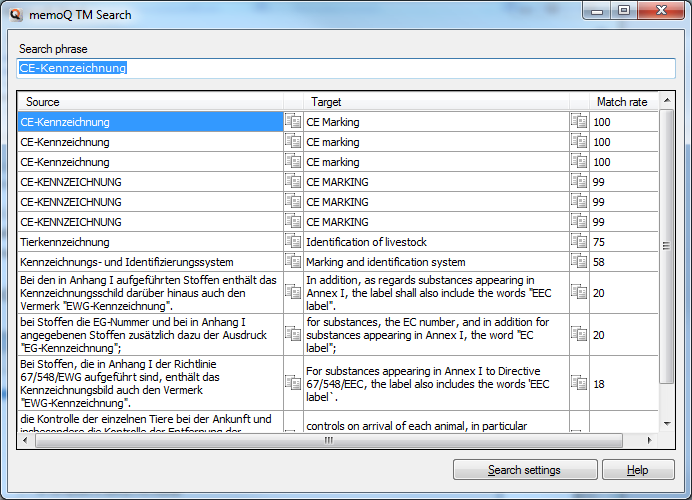 In the example above, for example, I am searching the 2 million translation unit EU DGT TM using text selected in a memoQ 6.2 project. Working this way offers me the following advantages:
Note also that I am using a feature of memoQ 2013 R2 (6.8) to do searches while working in an older version of memoQ. I could do the same if I were working in a web translation interface for memoQ (which does not allow me to attach my own TMs) or any other translation environment.

I remember an argument with a translation agency owner about a year and  half ago. The man told me quite insistently about his intent to force even translators with memoQ to use the web translation interface so that he could restrict them to the use of the client-specific TMs he maintained. With the use of the TM search tool, a reasonable compromise is achieved for TM data at least. (LiveDocs and termbase access remains a bit more cumbersome, however, though by setting up a dummy project with termbases, corpora and particular TMs attached, one could actually use three separate concordance sets. That could be interesting.)

In any case, the possibility of a separate concordance for handling large data volumes separately from one's main TMs and the possibility of doing this even while using older versions of memoQ may be a reason why those who do not yet want to do their routine work in the latest version or cannot do so can still benefit from upgrading now and installing the latest version alongside the old version(s).
Posted by Kevin Lossner at 8:00 PM