Last summer I wrote about autocorrection of text in memoQ and offered an indexed embedding of a video I created to give an overview of the AutoCorrect functions in memoQ 2013. There have been a few enhancements since then in memoQ 2013 R2; where only "smart quote" toggling was possible before there are now various options for correcting accidental miscapitalization.

I've also been looking to optimize the procedure for migrating the Microsoft Word autocorrection lists to memoQ. There are a number of problems with using the table-generating macro that Kilgray suggests in the knowledgebase article on using MS Word 2003 autocorrect data; when I created a 17,000 entry list from a large AutoCorrect file for one language, it was nearly impossible to do anything with it because of memory problems. The following macro, which could be put into the Normal template in MS Word, should be a little easier to work with:

Invoke the macros dialog in MS Word with Alt+F8. Select the Normal.dot or Normal.dotm file (depending on your version of MS Office) from the dropdown list, enter the name of the new macro and click the Create button. Then paste in the code above. When the macro is run, it will create a new document with the autocorrection list in tab-delimited text. To bring the list into memoQ, you'll have to
AutoCorrect lists which are language-neutral (for example, lists of company names) use "all#" in the name and "Neutral" between the tags.

Other sources for autocorrection data
With a bit of searching, one can find other sources of data to add to AutoCorrect resources for various language. Wikipedia, for example, offers lists of commonly misspelled words, such as this one in English, which includes links to Dutch, Hungarian, Portuguese, Spanish and Turkish lists. The structure of the data lends itself easily to reformatting with the search and replace features of a text editor:

Copy the data from the Wikipedia page to a text file. Then use search and replace to substitute tabs for the "->" structures, add an appropriate XML header for the memoQ resource and save the file as UTF-8 with an MQRES extension and you have an AutoCorrect list ready for import to memoQ. An example of the Turkish list converted and ready for use in memoQ is available for download here.

For German, there is a list of common spelling errors on Wikipedia which can be adapted with very little effort to make this resource.

The English list on the Oxford Dictionaries page can also be adapted without much ado. And there are many others to be found on the Internet.

Merging memoQ AutoCorrect resources
Entries from multiple AutoCorrect lists can be combined in a single tab-delimited file, and duplicates can be removed using Microsoft Excel, for example. 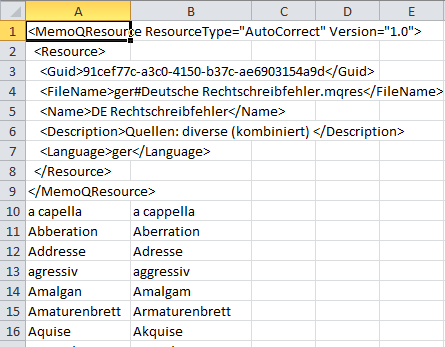 The screenshot above shows a merged German AutoCorrect list opened in Excel. When using the Remove Duplicates function on the Data ribbon, be sure that only Column A is selected in the dialog: 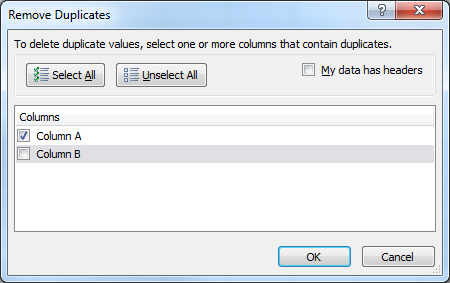 The reason Column B must not be selected is that it contains the desired text after correction, and there may be more than one error entry for a particular word.

After duplicates have been removed from the list, save the file as Unicode text, then import it to memoQ. A similar procedure with Excel may be followed to maintain other memoQ light resources; I do this rather frequently for segmentation exceptions to ensure that the lists for the different language variants I work with remain synchronized. (It would be nice, of course, if Kilgray would create a reasonable light resource manager with such capabilities. It gets tiring to do this so often with stopword lists and other resources.)
Posted by Kevin Lossner at 9:32 PM