memoQ 2013 R2 introduced a very significant change in the management of translation memory data which most users are likely not aware of. However, because the default behavior for information storage in translation memories was changed, it is important to be aware of this difference and what to do before your data are unacceptably compromised.

The screenshot above shows several different translations stored in my TM for the sentence in the second segment. In previous versions of memoQ, only one translation would be stored with the way this translation memory was configured. However, in memoQ 2013 R2, the role of the person editing the translation becomes an important part of the "context", and as a result, multiple translations can be stored for different roles. Personally, I find this a rather useless feature, because if I want to know previous translations for a segment, I consult the row history using the context menu. But I understand how in some processes, it may be desirable to maintain a record of translations entered by the translator and the first and second reviewer. 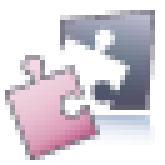 I have no use for these older translations, especially as these may contain errors (as seen in the example of the third entry in the screenshot). If I am proofreading my translation in a "reviewer" role and make changes, I want to overwrite the original entry in my TM and avoid the chance that its errors will be propagated in later work.

To avoid the problems that can result from this redundancy and preservation of errors in the translation memory, as of build 6.8.6 it is necessary for users to explicitly opt out of the current Kilgray TM settings defaults and create their own custom settings.

TM settings are "light resources" which can be managed in four places:
The last tab of the default TM settings dialog looks like this: 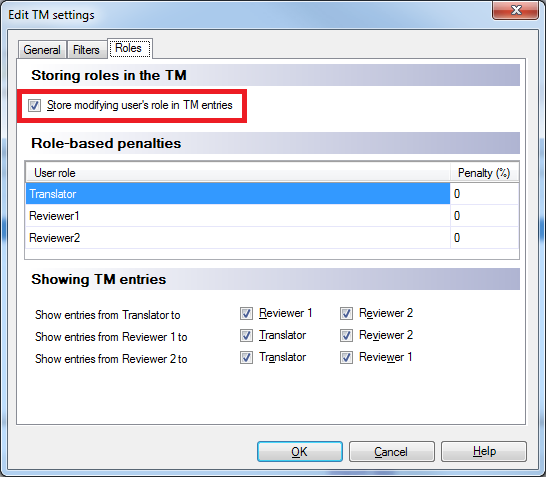 To avoid the trouble of multiple, role-based entries being written to a TM, settings must be created in which the option to Store modifying user's role in the TM entries in not selected, and these custom settings must be applied to the primary translation memory in the project (by default or explicit selection).

Here's the "fast path" for staying out of trouble:
Multiple entries written to the TM when the roles are included will not be eliminated after the TM settings are corrected. They must be explicitly removed by editing the translation memory.

I hope that in the future Kilgray will reconsider these troublesome new default settings and make the new possibilities "opt-in" values in custom TM settings. But for now, users must actively change their settings and defaults if they want to avoid role-based additional TM entries. (The current version of the memoQ Help describes roles as being disabled here by default. Would that this were so!)

You can, of course, make other useful adjustments to your custom TM settings, such as defining what a "good" match is (for pre-translation) or adjusting the tag matching behavior or applying various kinds of penalties to reduce match values for content which might have quality problems. The memoQ Help offers guidance on these options.

Postscript:
Even after the settings are "fixed", "existing damage" in a TM caused by the storage of unwanted, role-based information is not repaired. Any messes will have to be cleaned up in the rather inadequate TM editor in memoQ or in an external TMX maintenance tool. At the present time, there is no "easy option" to clean up a large number of erroneous or redundant translations stored because of this role setting. This case unfortunately underscores the woefully inadequate maintenance facilities for translation memory resources in the current version of memoQ. Perhaps some of the sophisticated options developed for Kilgray's TM Repository will finally trickle down in some way in an integrated option with Language Terminal or some sophisticated filtering and editing options will be added directly to the desktop product so that users can finally maintain their TM data in a reasonable way. memoQ is, overall, the best option available to us for project work in most cases, and I recommend it to colleagues because I know they will be able to do most ordinary tasks with a minimum of grief and calls for help (or expressions of anger) directed to me. But in 2013 it is ridiculous that my ability to manage my TM in my tool of choice is inferior to what I could do when I started using Déjà Vu as my CAT tool 13 years ago. Please join me in encouraging Kilgray to raise their game - soon - with respect to translation memory maintenance by writing to support@kilgray.com and expressing your need for better data management! (And more sensible default TM settings, of course.)

Update:
It looks like this default problem may end with the 6.8.6 build. One of the key people involved with memoQ and its features has stated that "After the [next] update, the default TM settings resource will have 'Store modifying user’s name in TM' unticked." Excellent.

For cases where there may already be data problems from older, erroneous entries being retained, the following workaround was suggested:
In the process, memoQ 2013 (version 6.5) will ignore the role information in the TMX, and entries with the same source will not create duplicates; translations with a later timestamp will be preserved in the TM if there are duplicates in the TMX.

This still doesn't change the fact that we need better means of maintaining our data in memoQ, but it is good that once again, Kilgray has responded quickly to important concerns of its users and is on the way to solving the problem.
Posted by Kevin Lossner at 5:55 PM