The memoQ 2013 release started off on the wrong foot with me in many ways. I was deeply disappointed by the features that were previewed in Budapest at the last memoQfest, and I was even less happy after I saw what a hash had been made of one of the features I use most: comments. In fact, I wrote a rather annoyed blog post about that not long after the release. There was a lot of talk about "game-changing innovation", but frankly I really could not see it. My translating colleagues asked me if it was worth it to upgrade, and aside from my usual warnings about the need to wait for at least 2 or 3 months after any release for it to mature and stabilize, I just could not find any compelling arguments for a freelance translator to move from the stable, excellent 6.2 version to the rather dodgy 6.5 version, or "memoQ 2013" as it was rechristened.

Almost on the usual schedule, however, two months later the bugs were largely sorted out, the initial mistakes in the comment feature redesign were well fixed, and I no longer saw the memoQ 2013 release in the same dim light, but could actually see some benefits for my freelance colleagues to upgrade to that version and no actual harm in doing so. And as I got to know the fuzzy term matching feature better and saw how it helped me deal with typo-laden source documents or the usual spelling chaos of German technical writers, I began to see some very compelling value in memoQ 2013 for translators.

Most of the "game changers" talked about in May actually arrived a month ago with Release 2 of memoQ 2013. I did my best to lower expectations for this release, not because I think it is crap, but because I think this is one of the best CAT tool version upgrades I have seen in 13 years, and I knew it would need the usual time to mature. I think by the end of the year this version will have so much to offer that I would rather not have people stressing over the small stuff that I am confident will be fixed well.

However, I decided to live dangerously, and I switched over all my production work to use this version even before the official release. The first few weeks were not fun with all the little quirks I discovered and duly reported, but I encountered nothing data-destroying or really shocking, mostly just housekeeping details like somebody forgetting to vacuum the rug after gutting the whole house and giving it a nice remodel.

One month after the official release, memoQ 2013 R2 is far more reliable than I remember any memoQ version being one month after release. There has been steady refinement in its features, and I continue to discover hidden gems that I sometimes suspect most of the Kilgray team aren't even aware of yet because so much was added and changed, but not in a way that disrupted older work processes. I have a long shopping list of refinements that I think should be made to new features like the TM search tool (which has only actually worked on my system since the release of the 6.8.5 build about a week ago) or that ground-breaking monolingual review feature which (will probably be the next big CAT feature to copy), but even the new features I consider rather immature are already looking pretty damned good. I can't guarantee that this release can be trusted for all your work right now (though it actually seems pretty good to me right now), but since it can be safely installed in parallel with older versions, I definitely recommend taking a look and joining the conversation on refinements still needed. I think Kilgray has been very responsive to user feedback in this round, and I can't say I am anything but encouraged by what I have seen in the last month.

One very exciting change for me in the current build (6.8.6) is that the rather risky non-optional export of target text comments with DOCX files has been sorted out very nicely. The solution seems a little strange to me right now, but it's a great step forward with some excellent possibilities. 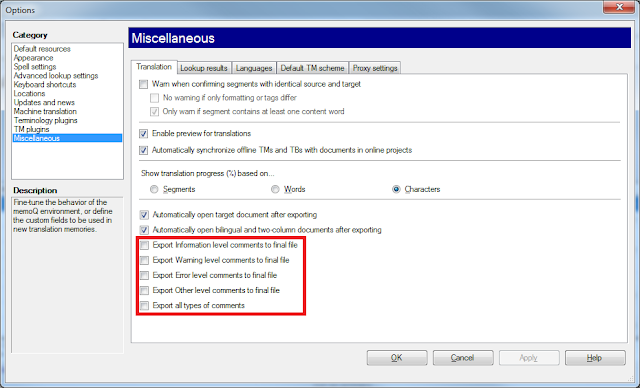 When I saw those "severity levels" added to the commenting features in memoQ 2013 (6.5), I had very little good to say about them. I still don't think much about how they are named and wish I could choose my own labels, but now I can only applaud their usefulness. Why? Because the addition of the five checkboxes above has given me the control I want over comments to be included in an exported translation of a DOCX file. I can cleanly separate the comments which are notes to myself from those for my project partners and comments for my customers. This is very helpful.

I do think it is odd that this control was placed at Tools > Options > Miscellaneous > Translation when the comment exports (as far as I know) only affect DOCX files, but if there are plans to extend this feature to other exported formats, then this makes sense. I would like to see similar filtering controls for the ordinary view filters (on that last tab where comment and tag filtering criteria can be specified) and for comment inclusion in a bilingual RTF export. Either of these would be an enormous help to my frequent work processes, because I use a lot of comments intended for different people, and sorting these out cleanly can be laborious.

In recent weeks I have been working on the new edition of my memoQ tips book and taking a very close look at "corners" of the software that I suspect very few have time or inclination to look in. And I've had days when it really felt like Christmas has come early. One discovery after another of nice little refinements, lots of incremental improvements, which added together give a total with what I feel is a lot of value. I'm writing way too many private thank-yous to some of the people at Kilgray for what I see as excellent new directions even if I am inclined to argue over some of the details.

Since the release of memoQ 6.2 and its follow-ups with the bilingual text/Excel filter, there has been such a steady flow of useful improvements to help individual translators work better that those who claim that all the effort of development has been spent catering to the corporate sausage-making interests of the low-paying cattle call crowd simply haven't been paying attention. Or they have been confused by Kilgray's occasionally appalling failure to organize their messages properly for different interest groups. If you're talking to a big group of freelance translators and start discussing "great server features to monitor your translators' productivity", don't expect blown kisses and showers of rose petals. Sometimes it's obvious that the makers of the tool don't always understand the importance of what they have created for our work. Well, why should they? We're the ones doing it. But I tell you, right now there is a lot more gold for individual translators in the memoQ mine than anyone realizes. That goes for me too. I am surprised by fat new nuggets I find almost every week.

Do I care that so much effort is spent on developing cutting edge project management features for memoQ translation servers, even ones that I think can be abused in some pretty awful ways by some companies whose business practices I detest? Well yes I do... I think it's great. Besides, I can actually come up with nice uses of those awful features. You can do a lot of things with a cutting-edge: chop up a tasty salad... or the local nursery school. Blame the fool, not the tool.

Kilgray has avoided the disastrous errors committed by Atril in the last decade as their market mis-focus and disastrous failure to get the maintenance revenue needed to fix and develop features steadily eroded the ability of its loyal users to cope with a changing market. There was nearly a complete failure to compete for the business of translation agencies and corporate and government translation departments. And the solutions that prevailed in those quarters were mostly rather awful. I watched whole departments of Siemens traumatized by the disastrous Trados Teamworks, which made a number of those in the translation team of the medical products division look forward to retirement.

Kilgray has steadily built its business in the markets ignored by Atril a decade ago and in doing so has secured its future far better and ensured the funding of a truly remarkable series of improvements in the four and a half years I have been using memoQ. And now... when I look at the features of the recent SDL Trados 2014 release I see good things that I have known from other tools for a long time for the most part, nice to have really, but as I stifle a yawn I wonder if it all really has to be so complex since I'm not depending on consulting or training for SDL to pay my bills. And then I get back to memoQ and keep getting rocked by the "wow factor" as I find useful new things while trying to concentrate and get a job done. memoQ 2013 R2 is one of the worst offenders I've seen in a long time for its very real threats to make my work a lot easier and more fun!
Posted by Kevin Lossner at 2:04 AM