(These tests were performed with memoQ 2013 R2 but should, in principle, work the same in any version of memoQ 6.0 or later.)

I really like memoQ's versioning features, and I use the X-Translate function fairly often when a document I'm translating has been updated or a new version comes sometime later. However, I don't keep documents in my projects forever. I use "container projects" for particular clients or subject domains so that I don't have to keep reattaching the same translation memories, terminologies and LiveDocs corpora and various light resources (non-translatables, autocorrect lists, segmentation rules, etc.) all the time. These can get rather full, so I send my old translations off to a LiveDocs corpus after a while. And then if a new version of a document shows up, well... I'm sort of out of luck if I want to use the X-Translate function with the previous version.

Or so I thought. And then a friend rang me and asked how she can export a LiveDocs alignment she did to an RTF bilingual file to make it more convenient to proofread in Microsoft Word and pass on to one of her partners with tracked changes. With that the answer to both problems was clear.

Select the corpus and the file in it to export: 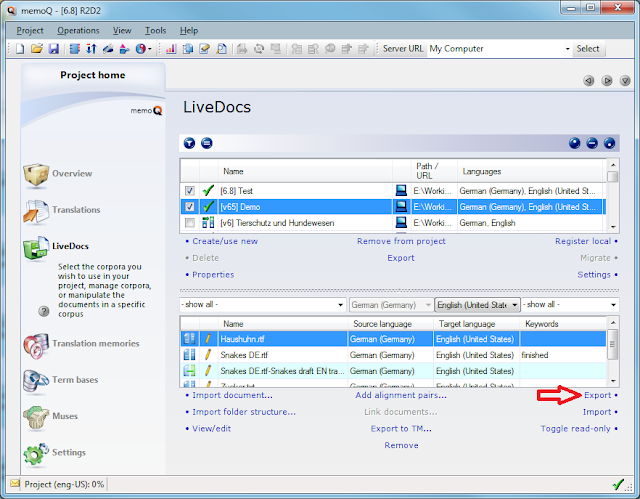 Click Export and choose a location in which to save the MQXLZ file:

In the Translations window of any memoQ project with the correct source and target language settings, select Import and choose your MQXLZ file: 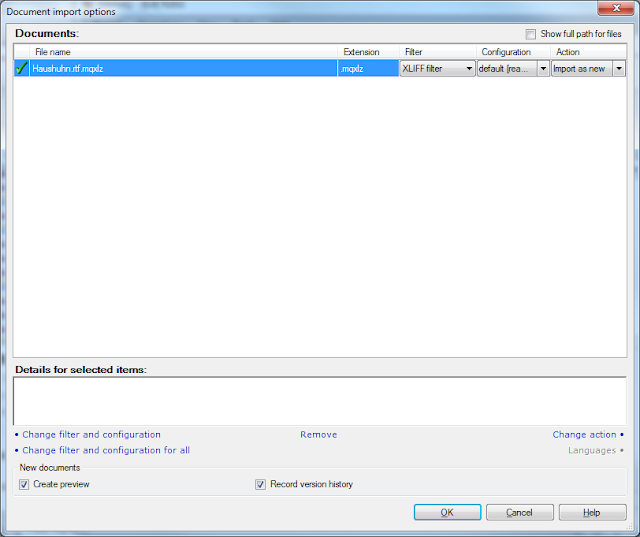 After the file exported from LiveDocs has been imported as a translation file, it can serve as "version 1" for a new file version to be translated using the Reimport document and X-translate features. It does not matter that the file types are different. A bilingual RTF file can also be exported for external correction and commentary. 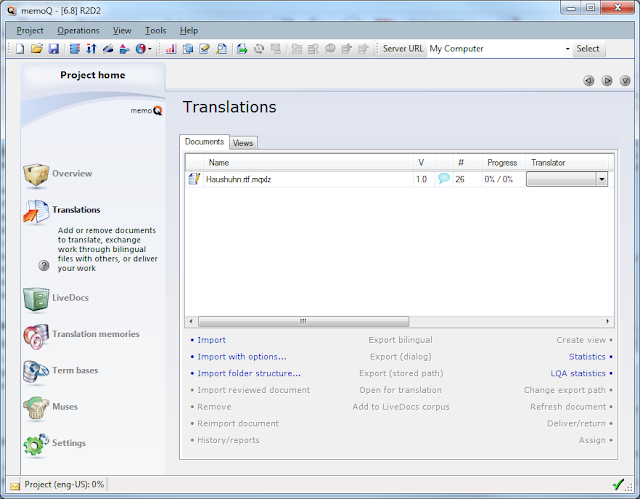 Here is an example of an exported bilingual RTF file with changes tracked. The changes do not have to be accepted before the bilingual file is re-imported to update the translation using the Import command.

Here is the updated translation: 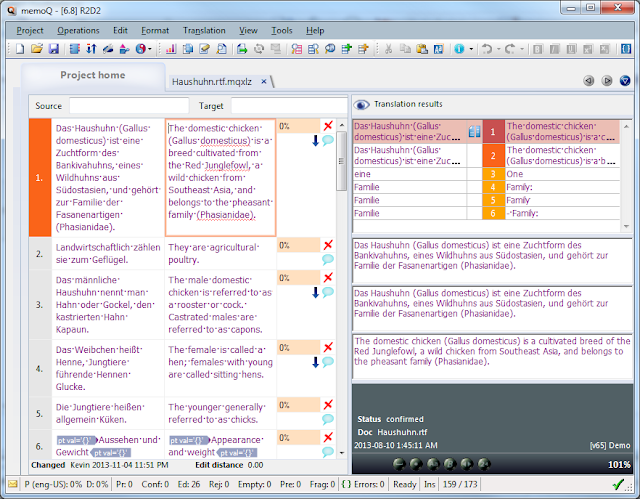 Changed are marked with blue arrows. Only text changes were implemented in this case, no format changes such as italic text, because the XLIFF file does not support WYSIWYG text formatting. (MQXLZ is a Kilgray-renamed ZIP-package with XLIFF and a chocolate surprise inside.)

Now I've got a new version of my text to translate in a DOCX file. I use the Reimport document function, answer No to the dialog so I can select the new version at a different location: 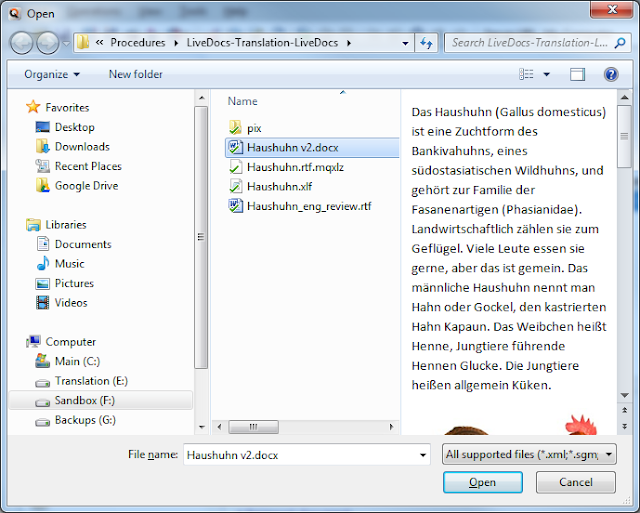 I'm curious what the differences from the original text are, so I use the History/reports command in the Translations window to find that out: 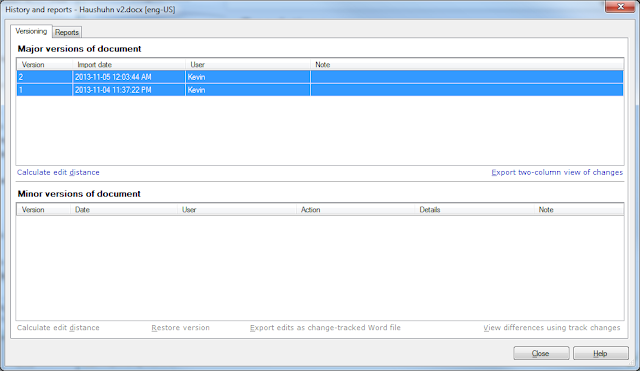 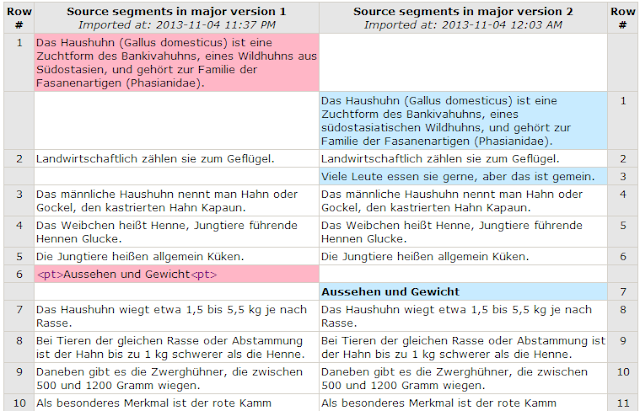 Then using Operations > X-Translate in the working window, followed by pretranslation to get the changed "exact matches" (like "Aussehen und Gewicht" above) and the fuzzy matches, I end up with this: 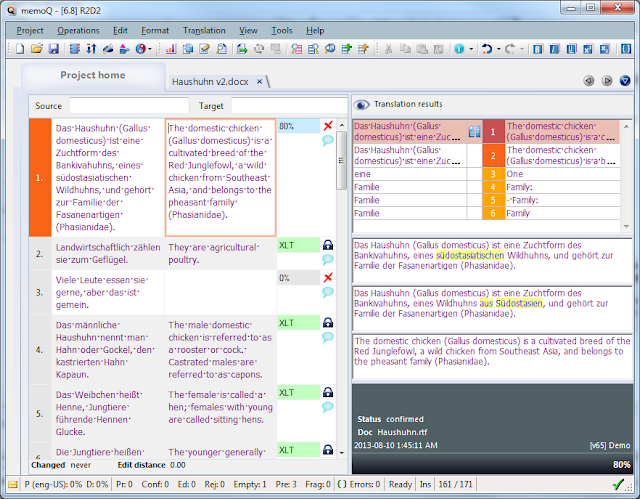 If you make it a point to store your important versions in a LiveDocs corpus, this procedure will allow you to recover your archived texts and re-use them for more controlled, reference-based translation. It would be nice, of course, if some day Kilgray would enable specific LiveDocs files to be used as the basis of a reference translation, perhaps even scanning a corpus or a set of corpora to identify the best-matching document or documents. It would also be nice if bilinguals stored in LiveDocs could be exported to other formats and perhaps even be updated with something like an exported bilingual RTF. However, those bilinguals can simply be imported directly to a LiveDocs corpus as new documents, and any corrections made to a document in the Translations list can be sent back to LiveDocs using the relevant command in the Translations window.
Posted by Kevin Lossner at 12:34 AM