After an interesting afternoon with a friend who was a bit frustrated with the behavior of her translation assistance technology with an ODT (Open Office text) source file, I decided to have a look at how a variety of common tools handle this format. I created a small test file which contained some of the troublesome elements and saved it as *.odt for testing. The test file looked like this:

The ordered list was created using the numbering feature.

When the file was imported to OmegaT, the segmentation looked as follows: 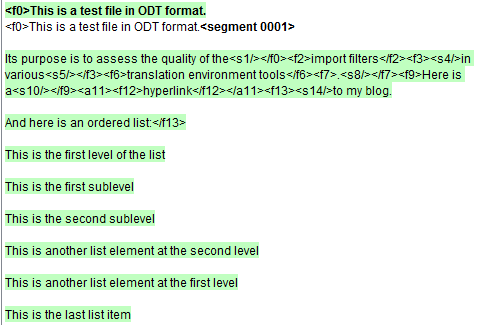 Fairly clean, though the segmentation is a bit off due to the encoding of the space after the end of the sentence in the second block of text. Nine segments where there should have been ten.

With memoQ, the result was: 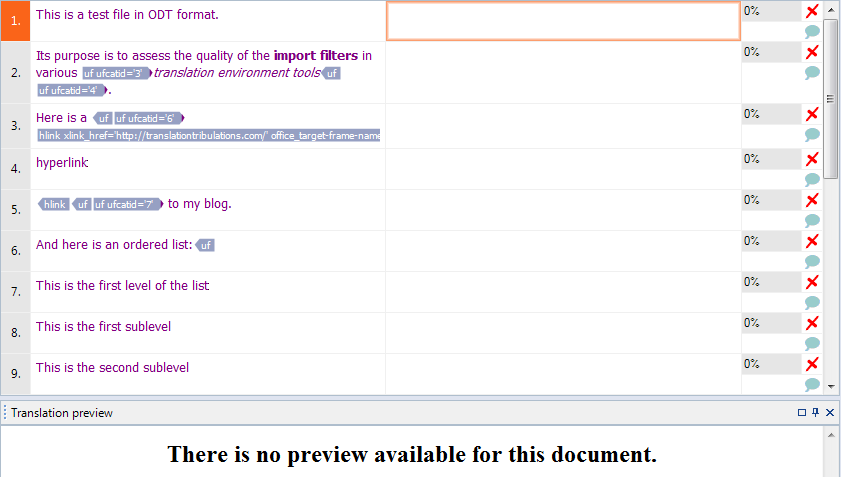 Altogether there were a dozen segments after import. The part with the hyperlink was segmented incorrectly in three parts instead of one. However, memoQ did handle the space tag after "tool." correctly and start a new segment at "Here". Once can, of course, use the segment joining function

Update 9 January 2012: The developers at Kilgray have informed me now that this quirk in the ODT filter has been corrected and will be included in the next build released.

When I tried to test my SDL Trados Studio 2009 license, at first it refused to joint the party:

Never a dull moment with SDL as we all know. Of course SDL Trados 2007 was in fact installed, but when I upgraded to Studio 2009, of course it trashed my 2007 installation, and I had been too irritated to do anything about it for over half a year since I don't use Trados for anything more than file preparation and compatibility testing anymore, and I was still able to do that for my projects with the damaged installation. However, when I discovered that the ODT file caused TagEditor to run and hide without even saying goodbye, I sighed deeply and wasted half an hour reinstalling SDL Trados 2007. At least I didn't have to go through that insane check-in/check-out license procedure online. I trusted in God and my Windows Registry entries, and the location of my license file was remembered, so all was well.

The second attempt at SDL Trados Studio 2009 was much better:

Same segmentation problem as OmegaT, and examining the tags reveals where the issue might be addressed in a tweak of the filter.

I haven't got the latest upgrade, but someone was kind enough to run my test file through SDL Trados Studio 2011, which appears to offer the best results for filtering ODT (the settings were slightly different, with the URL included, but that is also possible with some other tools): 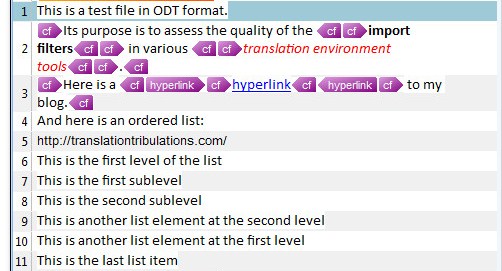 SDL Trados TagEditor also worked after re-installation. The results were: 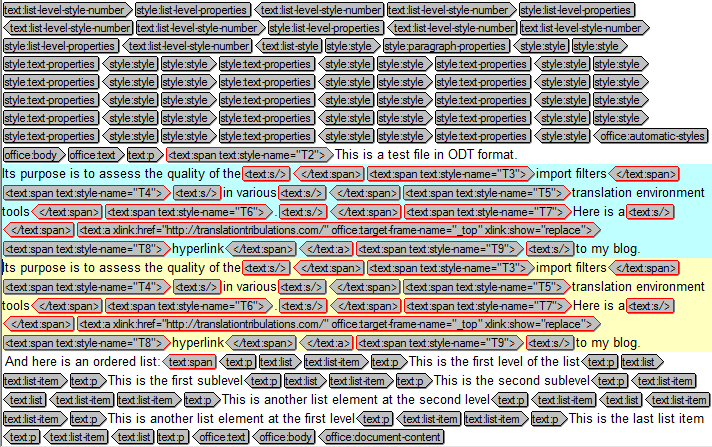 Oh dear. Well, it works, but if I still used TagEditor, I would run, not walk, to the much cleaner interface of OmegaT for this sort of thing if I didn't have the good sense to upgrade to Studio or something else commercial. Note the same segmentation issue and the need for filter modification.

Victor Dewsbery was kind enough to import my test file to the original Atril DVX and the newer DVX2 and send me the results:
I also tried to test SDLX, Wordfast Pro and Wordfast Anywhere. The first two tools don't support ODT. Wordfast Anywhere claims too, but went nowhere, with the following status message displayed in my browser for about half an hour before I gave up and went to lunch:

Of course I canceled. I had a blog post to write and a New Year to get on with. Anyone who wants to try the test file in another tool (to compare apples with apples) can get it here.
Posted by Kevin Lossner at 5:16 PM