The Great Firewall of Washington!

Slowly I am beginning to understand the association of the color red with the Republican Party in the United States. Before the 2000 presidential election, red and blue had no fixed association with Democrats or Republicans, and when I thought of the color red at all in the years after that I was usually seeing red because of Republican policies designed to dismantle the country or all the blood, foreign and domestic, which Republican lawmakers and Republican wannabes like "blue dog" Democrats so happily see shed. But slowly the truth is emerging from the fog of the Bush wars: the Chinese connection. Ol' Shrub & Co. happily financed their military adventures with Chinese money, now it seems that Republican lawmakers, following the lead of their Red Chinese masters, want to erect a Great Firewall in Washington to strangle free expression. Beijing disapproves of dangerous ideas like the First Amendment to the US Constitution, so their eager Red Party students in the US House of Representatives and Senate SOPA and PIPA respectively to set things right, based on the hollow premise of preventing copyright violation. President Obama has stated his opposition to the legislation now proposed; let's hope he doesn't roll over and play dead for the Reds as he is wont to do.

As part of the protest against US legislators' attempts to strangle free expression through unconstitutional preemptive restraints and other measures, Wikipedia will be blacking out its English pages worldwide tomorrow. Wikipedia, like any other Internet-based platform exists within and is affected by the framework of laws, and I find it entirely appropriate that this otherwise neutral platform stand up and take a position in this matter. Details regarding the blackout, scheduled to begin at 5:00 am UTC on January 18, 2012 and continue for 24 hours, will be found here.

We as translators depend very often on the public availability of information for our work. Intellectual property should have appropriate protection, but the Stop Online Piracy Act (SOPA) in the U.S. House of Representatives, and the PROTECT IP Act (PIPA) in the U.S. Senate are not the way forward. If you are a US voter, please make this clear to your erected representatives. 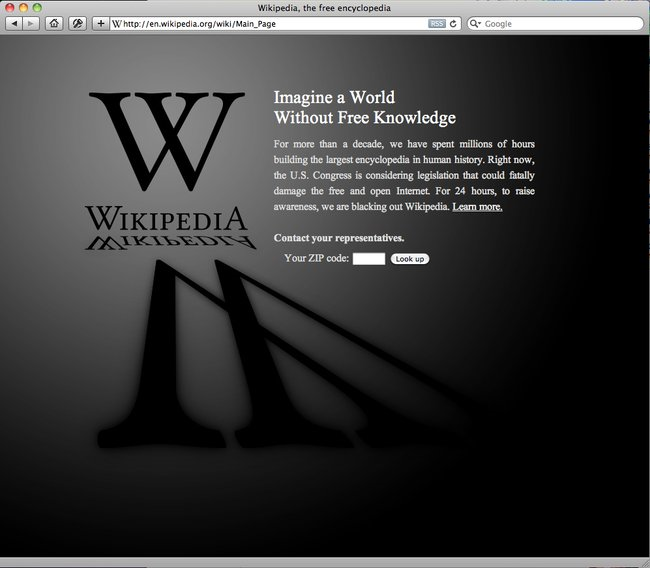 Posted by Kevin Lossner at 3:58 PM