When SDL released its new flagship product, SDL Trados Studio 2009 a few years ago, one encouraging feature was its use of a real standard... after a fashion. XLIFF has become widespread in recent years as a standard for exchanging translation project data, and SDL decided to "extend" this standard by adding their own unique tweaks to it. Nonetheless, a number of other tools are able to read and translate SDLXLIFF files, even if segment status marking is not performed for the deviant format. I have translated a number of these SDLXLIFF files generated by SDL Trados Studio 2009, and there have never been any problems.

When I was asked how data might be moved from an old memoQ project into the new Trados version, I naturally thought of using XLIFF as a simple option and an alternative to filtering and exporting TMX from the translation memory. Once it worked in fact, but too often error messages like the following were seen:

I was utterly baffled by this one, as were the project managers at the agency using the SDL tool. I could not understand why importing an XLIFF worked on some systems some of the time but not on others. Then once again, my favorite internal information source at SDL explained that there is a bug in the XLIFF import filter that yields this error if the default source and target languages are not in the same group as the languages set in the XLIFF file. In this case, the default settings were: 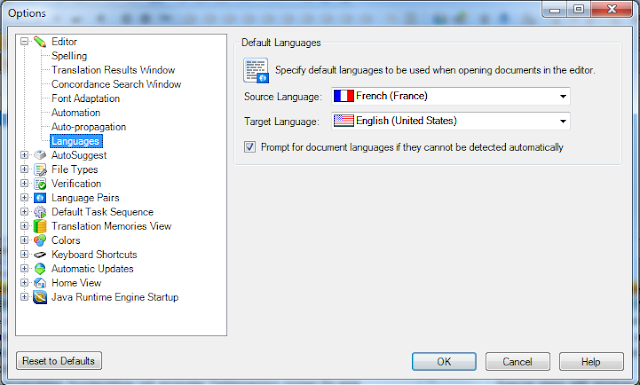 The source language in the XLIFF file I attempted to open was German.

There are two ways to deal with this problem if you need to import an XLIFF file from another source into Trados Studio: