What evil lurks in the results from your language service provider?

Let me start by disclosing that although I have a registered limited company through which I provide translation, training and technical consulting services for translation processes, I am essentially a sole trader who is not unreasonably, though not correctly, referred to as a freelancer much of the time. I have a long history of friendship and consulting support with the honorable owners of quite a few small and medium language service companies and of a few large ones. I vigorously dispute any foolish claims that there is no such need for such companies, and I see a natural alliance and many shared interests between the best of them and the best of independent professionals in the same sector.

But as Sturgeon's Law states so well, "ninety percent of everything is crap", and that would apply in equal measure to translation brokers and translators I suspect, though of course this is influenced by context. But what context can justify this translation of a data privacy statement from German to English? Only the section headers are shown here to protect against sensory overload and blown mental circuits: 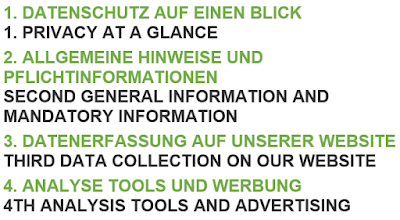 The rest of the text is actually worse. This is the kind of thing some unscrupulous agencies take money for these days.

Why, pray tell, was the section numbering translated so variously into English? Well, if you know anything about the mix-and-match statistical crapshoot that is SMpT (statistical machine pseudotranslation) and its not-as-good-as-you-think wannabe alternatives, it's easy to guess the frequency of certain correlations in English with German numbers followed by a period.

And clearly, the agency could not even be bothered to make corrections, and the robotic webmaster put the text up, noticing nothing, where it remained for about a year to embarrass a rather good company which I hold in high esteem.

What's the moral of this story? Take your pick from the many reasonable options. "Reasonable" does not include doing business with the liars and thieves who will try to sell you on the "value proposition" of machine translation to cut costs.

A skilled translator knowledgeable in the subject matter and trained in dictation techniques paired with a good speech recognition solution or transcriptionist can beat any human post-edited machine translation process for both volume and quality. And a skilled summarizer reading source texts and dictating summaries in another language can blow them both away as a "value proposition".

One thing that is too often forgotten in the fool's gold rush to cheap language (dis)service solutions is - as noted by Bevan et alia - exposure to machine-translated output over any significant period of time has unfortunate effects one the language skills (reading, writing and comprehension) of the victims working with it. This has been confirmed time and again by translation company owners, slavelancers and other word workers. Serious occupational health measures are called for, but to date little or nothing has been done in this regard.

And when human intelligence is taken out of play or impaired by an automated linguistic lobotomy, the results inevitable gall in the lower quartile of the aforementioned 90%. Really crappy crap.

As another of my favorite fiction authors used to comment: TANSTAAFL. There ain't no such thing as a free lunch. And trust is always good, but these days you need to verify that your service providers really give you what you have paid for and don't pass off crap like you see in the example above.
Posted by Kevin Lossner at 10:59 PM