A little over a week ago I celebrated the second anniversary of my arrival in Portugal with friends, who suggested a trip to town for food and fado. So we went to Casa de Fados Maria Severa in Évora and enjoyed a long night of wonderful music that went on well past the official midnight closing time. This was my first live experience with that musical genre, but it won't be the last. I'm not much of a tourist, so I have yet to experience many of the things that a typical foreign visitor might see in a week's whirlwind tour of Portugal. I came here to enjoy a normal life with good, normal people who respect each other and live as they can with the means available. The famous Alentejan cuisine reflects and amplifies this way of making do and doing it better with its minimalist approach of few ingredients, usually simple and inexpensive, but fresh and sound, with a resulting taste matched or exceeded by few. Life in Alentejo is best savored slowly, like aguardente caseira. 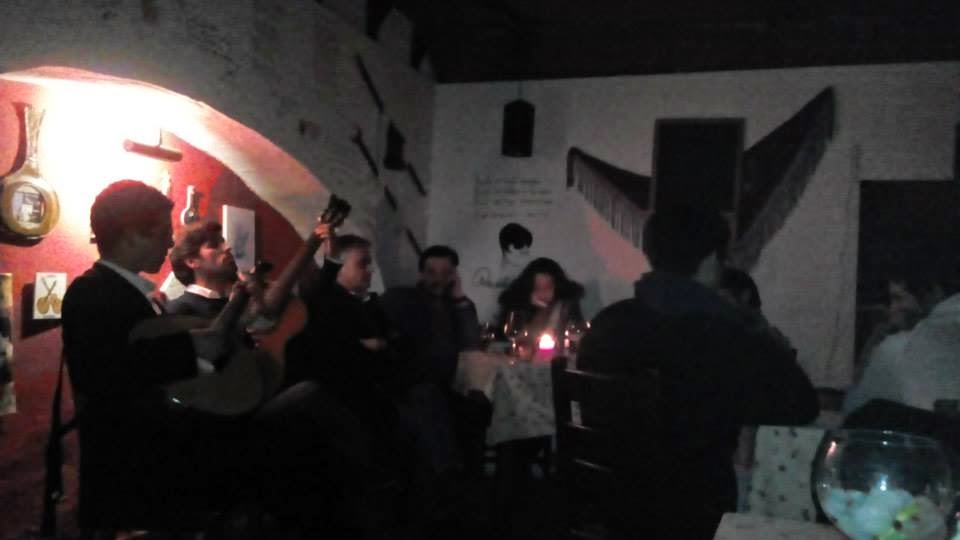 When I first arrived, my intent was only to enjoy a week of vacation, the first real one in nearly a decade. At the time I was living in Germany, where I had been since 1999 and where I expected to remain until my spare parts were harvested by the organ banks. Although I have nearly a 40 year history of close contact with the German language, come from a family of predominantly German heritage and always preferred to speak German at home in the US, and many of my friends in Germany are among the best people I am privileged to know, I never felt at home in the culture there, particularly away from the university environments. Many are concerned today about PEGIDA and other anti-social movements, but as one who usually flew under the cultural radar and passed for German, I find none of this new or surprising. So many things there which are accepted as normal, like the constant police guard on every synagogue, simply do not feel normal to me, and I could never stop taking it personally when imperfect strangers would try to engage me in conversations about how foreigners were ruining the country. Of course, such ugliness is not a majority characteristic there or in my country of origin, the US, but the minority is large and assertive enough in both countries that I prefer to live with a bit more tolerant quiet and hope for pleasant visits from like-minded German and American friends.

I used to think of Portugal as The End of the Earth, a place so far removed from the centers of activity that it was unlikely I would ever visit. Certainly, when I did decide to spend a little quiet time here looking at megaliths and old churches, and a friend spent some 9 hours and 5 bottles of wine trying to convince me not to visit this place where he believed the people were in a deep state of depression over the bad economy and the loss of their colonies (!!!), I did not expect Portugal to be The Journey's End. The sort of place where, after wandering too long on stony paths, you can put your feet up by a fire, like the one behind my office desk, and know you are at home.

Of course,  it rains even in paraíso, and the adjustment process, even in a good place, is often not easy. I think the greatest challenge for me, once I figured out where to find bread yeast and pectin, was dealing with linguistic isolation. It still is. For most of the first year I lived here, I kept my head down as I dealt with the administrative details of establishing residence and a business presence and moved house three times until I found a place whose dimensions and character truly met my needs. I spent little time learning more than the rudiments of the Portuguese language in that time, because the more I experienced that beautiful language, the more I knew it would break my heart to have to leave it. After it was clear that I could stay on, for another year at least, I sought out a part of town where the socioeconomic profile made it unlikely that I would encounter a lot of English speakers in my daily routine, and I made rapid progress with the local language for a few months as I fought a plague of mice and cockroaches before moving to a quiet little quinta several kilometers outside of town, a deep, narrow property perfect for training dogs and doing a bit of gardening.

I'm fortunate to be near the ecopista, a beautiful path for pedestrians, equestrians and bicyclists on what used to be the train route for grain deliveries from the nearby farms. When the weather is nice (that is, most of the time), it's a great way to go to town or much farther out, where your way may be crossed by rabbits and javelis and not so many people.

It's been 16 years since I've lived on a farm, and it's slow going to figure out how to do what I want to with the land when the conditions are so different from what I knew before and I struggle to find the right words for conversations with neighbors about chickens and manure. Most of my attempts at a vegetable garden so far have been greeted with enthusiasm by legions of snails, who may someday adorn my dinner plate as penance for their voracious crimes. I've taken only a few random, neglected fruits from the land so far; a lot of careful thought and rehabilitation will be required, but this is a welcome break from the daily challenges of German translation, technology consulting and teaching for clients and colleagues at the other ends of the Earth. However, I was fortunate to find guidance for what to do with the crop of the dozen olive trees scattered about my six acres:

I never would have imagined that my own cured olives, spiced as I like them, would be so much better than the ones I've eaten from store-bought jars, in restaurants and bought at farmers' markets and other places for years. Perhaps by next autumn I'll have figured out how and where to convert the bulk of the crop to oil, which was a staple in my kitchen long before I came to Portugal.

Life here is good, but unpredictable, even less predictable than the changing tides of translation in the past half decade. But where the general environment is a healthy one and the culture is tolerant, friendly and mostly flexible, unpredictability often means nice, or at least amusing surprises. When I wake each morning, I am not certain what to expect from the day aside from my usual work routine. Most days are uneventful - a visit by the husky bitch from a neighboring farm, who plays with my dog and hopes for a handout, a few pleasantries exchanged with neighbors about potatoes or rain, um galão at the taberna, conversations with my dog to convince him that the neighbor's sheep are not to be hunted - the usual. But anything could happen, and I always look forward to that here.
Posted by Kevin Lossner at 10:52 PM