The New England Translators Association (NETA) has published an open letter of support for Aurora Humaran, president of IAPTI, who is faced with lawsuits against her and her organization in brute violation of her personal freedom of opinion and expression and against IAPTI members as a whole, whose freedom of association has been threatened. Here is the text:

Dear Ms. Humarán:
It has recently come to the attention of NETA’s members that you, as IAPTI’s president, are facing lawsuits for allegedly authoring an anonymous blog post that was critical of a translation agency’s practices and for using social media to circulate it. We have further learned of threats made by this agency to publicize the names of IAPTI members who refuse to disavow support for you as its president and to denounce them personally to other clients for whom they work.
As a fellow association of professional translators and interpreters, NETA is deeply concerned about the dangers that these lawsuits and threats pose to the freedom of expression guaranteed to you, as an individual and as president of IAPTI, and to the freedom of association guaranteed to all of IAPTI’s members. We believe that, more broadly, these dangers represent an affront to the rights of all translators and interpreters to express their opinions, to share information through social media or any other channel, and to associate with their colleagues without fear of retaliation. The United Nations Universal Declaration of Human Rights enshrines the freedom of opinion and expression, including the circulation of ideas through any media and across any frontier, as well as the freedom of association. NETA condemns all efforts to suppress such freedoms taken by any person, translation agency, or other entity against any translator, interpreter, or the organizations that represent them.
As president of NETA, I therefore wish to affirm our unequivocal support for IAPTI and for you as its president to exercise your legitimate freedoms of association, opinion, and expression without interference, without threats, and without restrictions placed on the venue or medium through which opinions are expressed or circulated. We strongly hope that the lawsuits against you will be promptly dismissed and the threats against IAPTI members will be fully retracted.
Since this is an open letter, we are publicizing it through NETA channels and we invite IAPTI to publicize it through its own channels as it sees fit.

Diana RhudickPresident, New England Translators Association, on behalf of the Board of Directors and NETA Members

The recent deranged attack by a bulk market bogster is part of a long-standing pattern of attacks by self-interested parties from the low-end translation bog and other exploiters and charlatans seeking to sell their sleazy interests to trusting professionals and turn these against their own. I am long familiar with such things myself, for example with the recent threats received, in public and in private from the I Am That I Am of translation, His Hendzelness, for discussing questions about Translators Without Borders and its sometimes dubious practices (more on that to come), questions which may have influenced the resignation of that organization's head as the evidence mounted, but Mr. Chiosso's illegal and unethical campaign aggainst IAPTI's president and its members raises the ante to a new level.

And the silence so far from certain pundits and some other professional associations is deafening.

I applaud the sound ethical instincts of the New England association, the first to show backbone in standing up beside another organization and its president to prevent cancers like this from spreading. Like the recent action from the ITI in the UK, begun under its former chairman, my esteemed colleague Nick Rosenthal, and which finally resulted in the conviction of a deceiving translation agency operator who defrauded his suppliers - translators - of large sums, this is the sort of thing where we all need to stand against the criminals. Not support and promote such practiceZ as some do. 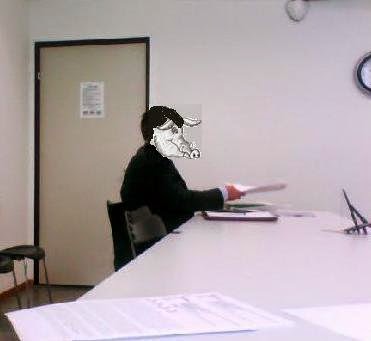 I took the picture above in a Swiss courtroom a few years ago, where another infamous bogster and defaulter on payments owed to translators sued me for daring to discuss his unethical practices on this blog. The costs awarded to me in that action remain unpaid to this day. But let's hope that the same graphic could be used soon to report the fate of Mr. Chiosso, who most definitely belongs in the dock. And on that day, we shall see who stands for free, honest expression and the rule of law in our societies and who remains... silent.

Posted by Kevin Lossner at 8:57 AM