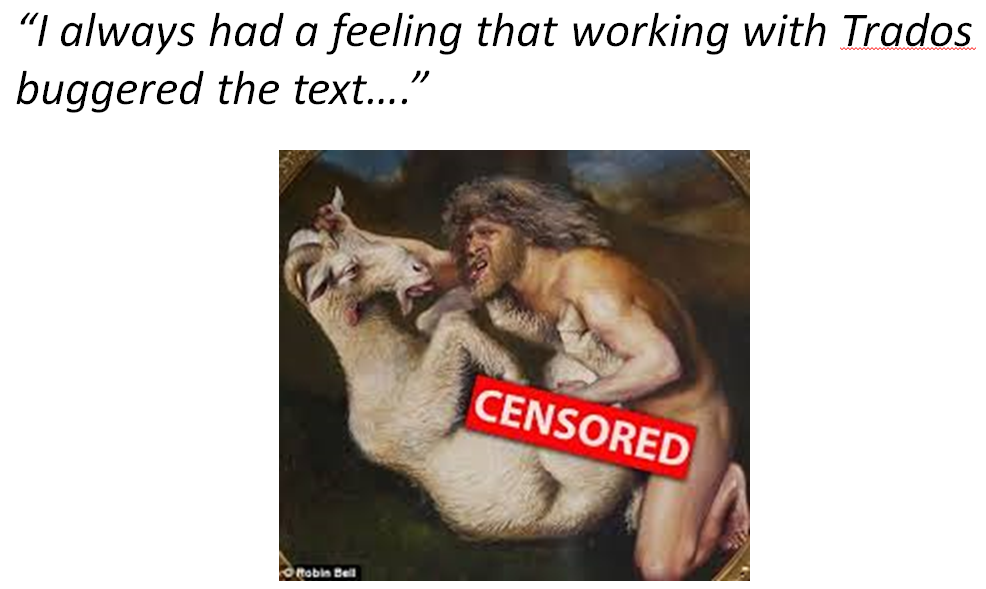 I've been testing the new memoQ 2014, thinking of all the great features I can and probably should describe, even promised to describe when Kilgray kindly gave me and other bloggers early access to a pre-release version. But, alas, I have a soft heart and cannot help but think of the despair SDL stockholders and employees must feel, the anguish of Studio users when the reality of their plight sinks in and they read the latest news about that apostate tool, memoQ, which just works most of the time instead of making you work for it.

The quote above from a long-suffering member of the SDL Trados beta test team is indicative of the emotions and experience of many veteran Trados users, and that colleague and so many others are fleeing to higher ground, hoping to find a place on Kilgray's software ark before the floods of Big, Dirty Data wash over the land and drown the #sdlinnovators as they desperately tease performance from their "vertical MT". And shocking revelations of translation practices in Maidenhead, UK, as reported by a neighbor and reformed SDL employee with a direct view of the SDL parking lot there, have led many to fear the Days of Revelation for memoQ 2014.

And I think of the SDL consultants and translation IT consultants in Germany who were only following orders when they helped their customers implement Across, and the despair they must feel at the thought of the many memoQ trials now being conducted in their country.

I think of all the things I could show and tell about the new project templates and automation in memoQ 2014, and all the hearts and minds that will break at the realization, the weeping and gnashing of teeth over wasted hours, years... and lives in the shadowed margins of struggling existence, gnawing on classic Wordfast crusts.

Workflow interoperability and general ease of use from Kilgray are threatening diversity in translation technology as the flocks of sheeple move to greener software pastures and eat their fill of easier language service provision and take a greater share of profits better devoted to those kinder, gentler providers of linguistic sausage.

So please, gentle people, do your part, show mercy and invest in endangered translation tools, which seek only to take us down that primrose path, paved with good intentions, to relieve the undue burdens of buyers who sacrifice far too much of their capital on the altar of survival for undeserving freelance translators. Support the Smartling crusade, offer your Maidenhead to SDL, keep your head in the XTM cloud as you practice your Fluency for languages, enjoy that nagging sense of Dejà Vu, source your memory and surf the storm-TAUS'd Big Wave and Google in awe at automatic translation on the active commodity market.

Friedrich Nietzsche wrote: "Was dich nicht umbringt macht dich nur stärker" ("what does not kill you only makes you stronger"). Be strong. Don't take the easy way out of Translation Tribulations with memoQ 2014. Get your SDL Trados Studio license here instead.